As the dust settles around what many considered to be a surprise Supreme Court ruling to uphold the Affordable Care Act, folks are gonna have to seriously refocus and start thinking outside the box.. If there’s one thing the last few years should’ve made clear,  is corporate tyrants, far right zealots and media lap dog pundits eager to make a name for themselves or score political points vs telling the truth, do not sleep.

Again let me repeat.. Those who are on the so-called ‘losing side‘ of this issue will not be taking this lying down.. They are already hard at work drawing up plans and contingency plans to not only knock healthcare reform permanently off the map, but also trying to see what laws they can put in place that will keep the majority forever hemmed up at the mercy of the Medical Industrial complex.

What was handed down today was a ruling that gave folks a bit of breathing room. Hopefully folks are gonna use that time to catch their breath and come up with bold new visions for tomorrow… 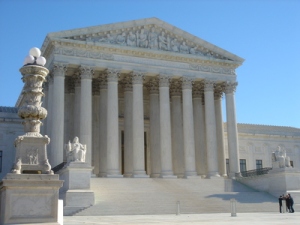 Let’s refocus on what has thus far taken place.. Key word REFOCUS.. The Affordable Care Act was big compromise from jump street. Many of the facets including the public option were wiped off the table.  At this point in time we should be pushing to have Universal Healthcare. We should be focusing our attention and efforts that are underway in states like Vermont and here in California to make sure Healthcare is truly universal..

We should refocus and remember what’s been the big obstacle for all of us having access to healthcare in the first place..Can you say INSURANCE COMPANIES.. It doesn’t matter what today’s ruling said. At the end of the day most of us are still gonna have to deal with an insidious insurance industry that has made record profits over the years and will spend endless time and resources finding ways to get out of giving us adequate Healthcare.

If they have to increase their lobbying efforts to win over lawmakers both in Washington or at home, they will do so.. If they need to spend a few dollars buttering up ‘community leaders’ to push their agenda, they will do so.. If they have to bombard the airwaves with commercial touting how dope they are.. they’ll do it.. If they have to run their own candidates they’ll do that as well. Rest assured they’ll be trying to find ways to raise rates like Bruce Bodaken CEO of Anthem Blue Cross did a couple of years ago here in Cali when they jumped them up 30-39%.. That should be a stress we should once and for all eradicate

With each step they take you should be asking yourself, why is this industry so hellbent on having their way versus making sure the flood gates are open so each and every one of us can get healthcare? What’s really going on with these companies should be what were asking? How can we remove them from the equation?, should be our second question. 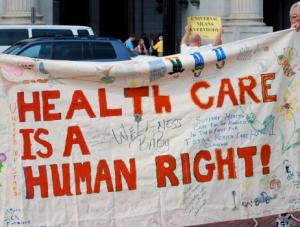 All of us need to be about the business of refocusing our attention on healthcare Being a Human Right.  I’m gonna repeat that.. Healthcare is a Human Right not a Business. It should not be only for the rich and powerful…Common sense should tell us all that my untreated ailments can become tomorrow’s untreatable disease or plague impacting you whether you have health insurance or not.. There is sadly  a small 1% but vocal and wealthy creed among us who vehemently believe we should be thinning the herd. They believe it’s a good thing if those who are seriously sick, just die off.. Unless their name is God, Allah, Jehovah or Jesus Christ that should not be allowed to happen. Our fight for Healthcare should not end until anyone of us no matter what our station in life can get treated if sick…

And don’t get me wrong.. If there are free market types that have the money to boot and wanna go out and get some high-priced ‘Golden coverage’, I say let ’em.. Spend your hard-earned money as you see fit.. What gets me, why those same individuals are so determined to cripple and handcuff everyone else in the process. There’s seems to be a mean spirit embraced by some that says its only good if they can have while the rest can’t.. Again our mantra should be Healthcare is a Human Right.. It is not exclusive..

We should be thinking outside the box.. Business as usual has made our healthcare a system one big expensive mess. Treatment is expensive, going to med school is expensive..  How about we push to make medical schools free or seriously inexpensive? No one coming out of medical school should be owing 100-200 thousand dollars thus forcing them to work for a large conglomerate that can pay them a salary and those hefty loans. Wouldn’t it be great if folks who have genuine love and concern for the community and wanna give back via their knowledge and skill set be allowed to do so without a concern about paying back a school loan that’ll take a lifetime?

We should have an array of affordable medical schools with an agreement that folks graduating from there give some of their time and knowledge to the community..In short we should make a societal investment in doctors and medical researchers the same way these huge medical corporations are doing.. Historically some of the best medical care in our communities occurred when we had loving and committed individuals who worked alongside organizations like the Black Panther Party to provide Free Health Clinics. In many countries you find incredible Healthcare coming from institutions like the church where they work alongside doctors.. Let’s make medical school affordable and let’s make sure all of us at an early age start getting good information that will help us take care of ourselves for the long haul vs always being dependent on doctors and a medical industry that is in constant ‘sell’ mode, attempting to make us consummate pill consumers

Speaking of which, lets push to remove these huge profits and competition over patents for medicine and cures. Far too often we are finding ourselves being sold something versus getting educated or treatment that will heal us and make our visits to the doctor infrequent occurrences. Thanks to all this medical marketing, today we now have folks rolling up into doctors offices demanding to have the new pill they just saw being hawked while watching their favorite TV show. Many are insistent on having these pills even if they aren’t sick..

We should be expanding ways that we can all can start taking care of an aging baby boomer population who are our parents and grandparents from the 1960s..No one should have to face the daunting task of paying $2000 and 3000 to send an aging parent to a nursing home.. We should be making sure that substance abuse, mental illness, stress caused by poverty or living in a crime ridden neighborhood are all things we can be treated for readily.. 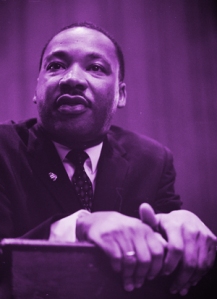 “Of all the forms of inequality, injustice in health care is the most shocking and inhumane” -MLK

I could go on and on with suggestions.. This is not a one size fits all scenario.. What I’m basically saying is that today’s Supreme Court ruling gives us all an opportunity to step up our game and become stakeholders in our collective Healthcare.. I’ve been to Washington many a days covering HCR including when they had the Supreme Court hearings. Everyone I spoke to who heard the concerns that people had in terms of it not going far enough, repeatedly said, that what passed two years ago was just the beginning.. They said over time it would get better and more things would be added. If that’s the case all of us should be pushing to be at the table and working to permanently remove any and all debates around whether we should have Healthcare reform. It was a sad state of affairs that we were even in that dreadful space. As Martin Luther King once famously said “of all the forms of inequality, injustice in healthcare is the most shocking and inhumane.

Today was not a touch down.. We gained some good yardage.. Somebody missed a block, perhaps it was Justice Roberts who shocked everyone by breaking with his conservative counterparts and issuing the decisive vote to uphold ACA.. In any case the end zone is still before us..When Healthcare is Seen as a Human Right for All, then and only then can we spike the ball and do a celebratory dance.

We’ll leave you with this song on healthcare that was done by Bay Area rapper Paris. he recorded it during the height of the debates around passing the Affordable Care Act.. What was crazy was some of the footage shown was from a rally here in Danville which is in the Bay Area.. Some guy was chanting F– The Poor. The crowd shown there cheered along..