The following essay is an adaptation of a Facebook post by Ahmir “Questlove” Thompson in response to George Zimmerman’s acquittal in the killing of Trayvon Martin. Questlove is the drummer for the Roots and the bandleader on Late Night With Jimmy Fallon. 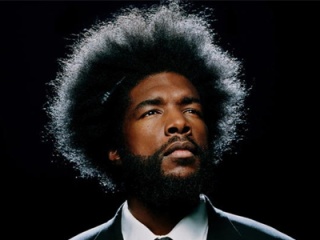 I’m trying not to internalize these feelings about the Trayvon Martin case and make it about me — but hey, it is what it is, and maybe I’m melodramatic. All I’m consumed with is my positioning in life.

I often tell cute, self-deprecating celebrity run-in stories that end with my own “pie in the face” moment. But rarely do I share stories of a more serious nature, another genre of “pie in the face” moments, mostly because in the age of social media, most people are quick to dismiss my tales as #FirstWorldProblems. But I can’t tell you how many times a year I’m in a serious situation, only to hear the magic words “Oh, wait … Questlove?” Hey guys, it’s Questlove. “We’re so sorry, you can go!” Like, five to seven times a year, a night ending in the words “Thank God for that Afro or we’d never have recognized you” happens to me.

I’m in scenarios all the time in which primitive, exotic-looking me — six-foot-two, 300 pounds, uncivilized Afro, for starters — finds himself in places where people who look like me aren’t normally found. I mean, what can I do? I have to be somewhere on Earth, correct? In the beginning — let’s say 2002, when the gates of “Hey, Ahmir, would you like to come to [swanky elitist place]?” opened — I’d say “no,” mostly because it’s been hammered in my DNA to not “rock the boat,” which means not making “certain people” feel uncomfortable.

I mean, that is a crazy way to live. Seriously, imagine a life in which you think of other people’s safety and comfort first, before your own. You’re programmed and taught that from the gate. It’s like the opposite of entitlement.

The problem is, I do have desires to go to certain places and do certain things and enjoy the perks and benefits of being a person who works his arse off as much as I do. So I got over my hang-ups of not wanting to be the odd guy in the room sometime around 2007. It’s been mixed results at best. Some of it is “Oh, that wasn’t that bad”; some of it is “Well, that was awkward … ” This is the prime reason I hate vacations. I don’t feel like being the “odd guy out” at vacation spots, hence the reason my 2009 hobo journey train trip was my best vacation ever. There’s no scaring people on a train ride. My friends know that I hate parking lots and elevators, not because they are places that danger could occur, but it’s a prime place in which someone of my physical size can be seen as a dangerous element. I wait and wait in cars until I feel it’s safe for me to make people feel safe. I know most of y’all are eye-rolling, but if you spent a good three months in these size fourteens, you’d understand why I take that position.

I recently told a friend one of these stories: I live in a “nice” building. I work hard. You know I work hard. My logic is (naïve alert in 5, 4, 3, 2 … ) “Well, there can’t be any fear of any type in this building” — you’ve got to go through hell and high water just to get accepted to live here, like it’s Dartmouth or UPenn. Secondly, there are, like, five to eight guards on duty 24/7, so this spot is beyond safe. Like, Oscar winners and kids of royalty and sports guys and mafia goombahs live here. One night, I get in the elevator, and just as the door closes this beautiful woman gets on. Because of a pain in the arse card device you have to use to get to your floor, it just makes it an easier protocol for whoever is pressing floors to take everyone’s request, like when you are at the window of a drive-thru. So I press my floor number, and I ask her, “What floor, ma’am?” (Yes, I say “ma’am,” because … sigh, anyway.) She says nothing, stands in the corner. Mind you, I just discovered the Candy Crush app, so if anything, I’m the rude one because I’m more obsessed with winning this particular level than anything else. In my head I’m thinking, There’s no way I can be a threat to a woman this fine if I’m buried deep in this game — so surely she feels safe.

The humor comes in that I thought she was on my floor because she never acknowledged my floor request. (She was also bangin’, so inside I was like, “Dayuuuuuuuuuuum, she lives on my floor? *bow chicka wowow*!” Instantly I was on some “What dessert am I welcome-committee-ing her with?”) Anywho, the door opens, and I waited to let her off first because I am a gentleman. (Old me would’ve rushed first, thus not putting me in the position to have to follow her, God forbid if she, too, makes a left and it seems like I’m following her.) So door opens and I flirt, “Ladies first.” She says, “This is not my floor.” Then I assume she is missing her building card, so I pulled my card out to try to press her floor yet again. She says, “That’s okay.”

Then it hit me: “Oh God, she purposely held that information back.” The door closed. It was a “pie in the face” moment.

I laughed at it. Sort of.

Inside I cried. But if I cried at every insensitive act that goes on in the name of safety, I’d have to be committed to a psych ward. I’ve just taught myself throughout the years to just accept it and maybe even see it as funny. But it kept eating at me (Well, I guess she never watched the show …  My English was super clear … I called her “ma’am” like I was Webster … Those that know you know that you’re cool, but you definitely know that you are a walking rape nightmare — right, Ahmir? Of course she was justified in not saying her floor. That was her prerogative! You are kinda scary-looking, I guess?). It’s a bajillion thoughts, all of them self-depreciating voices slowly eating my soul away.

But my feelings don’t count. I don’t know why it’s that way. Mostly I’ve come to the conclusion that people over six feet and over weight regulation or as dark as me (or in my tax bracket) simply don’t have feelings. Or it’s assumed we don’t have feelings. I mean, it’s partially right: I literally figured the only way for me to not go insane in a career that creates junkies (or at best Kanye) is to desensitize myself from feelings. The thing is, though, I’m a halfway crook, an awesome poker player. Yeah, I hurt. But I’ll be damned if I let you know that. Call me a 75 percent robot, 25 percent human being.

When I got off a plane Sunday morning, after the “not guilty” verdict in the George Zimmerman trial, and I was waiting in customs, I read an apology e-mail from a friend who said, “I am wrong about many things, but I want to apologize for taking that particular story you told me too lightly.” The one about the woman in the elevator. And it kinda touched me. My friend related to me, and it was a gut-punch I wasn’t expecting on an already emotional day, so I guess I started to almost … cry?

Then the Roots’ manager Rich hits me on the phone seconds later. Boom. I know it’s sad to say, but we in the Roots circle love each other like family. But not enough to trust each other in vulnerable moments. (This is a man who waited until he was on the operating table, minutes away from surgery, to finally reveal to me he was going through a life-or-death cancer procedure, simply because he didn’t want to distract me or create excuses as to why I didn’t finish my book.) On the phone, I do my best “straighten up, stop sobbing” shtick, and he says, “What’s wrong?” In four seconds flat, I bury it, and I’m back to normal. I’m not proud of that. I’ve spent eleven of the last twenty years in therapy trying to deal with that. So I decide to abandon Operation Bury, and I say, “Well … ”

How do I answer that? This does NOT feel like an average day. Remember how nice everyone was post–September 11? Eerie. Almost surreal. Like everyone is acting “too nice,” and I don’t know how to process that. Then there are people that are acting like nothing happened. (“Hey, Quest, where is Dave Chappelle at!?”) It was just one of those days that didn’t feel normal to me. But Rich keeps picking at the question like a three-month-old scab: “What’s wrong?”

And I’m like, “Need I say it!?” I can’t tell if he’s provoking me or not. I don’t know how to not internalize the overall message this whole Trayvon case has taught me:

That’s the lesson I took from this case.

These words are deep because these are words I’ve heard my whole life: I heard from adults in my childhood that I needed to be “about something” other than all that banging and clanging and music I play all the time. As I got older, I heard I wasn’t as good as so-and-so is at music. All the “you ain’t shit” stories I got — Jesus, it’s a wonder I made it.

Rich asks, “Wait, you’re not surprised, are you?” I’m not surprised at all, but that doesn’t mean it stings any less.

I should be angry, right? I remember when the Sean Bell verdict came out and I just knew, “Oh, God, New York is gonna go up in flames.” And yet no one was fuming. It was like, “[Shrug] … No surprises here. That’s life.”

Rich asks again, “Are you surprised … that you ain’t shit?”

I guess I’m struggling to get at least 1 percent of this feeling back, from all this protective numbness I’ve built around me, to keep me from feeling. Because, at the end of the day, I’m still human.

Questlove is the author of Mo’ Meta Blues: The World According to Questlove.

6 comments on “Questlove Goes In w/ His Essay: Trayvon Martin and I Ain’t Sh*T”