Saturday June 16th we’ll be celebrating what would’ve been Tupac Amaru Shakur‘s 41 st birthday..In order to bring attention to his life and accomplishments, we put together a few good interviews and a dope Tribute mix featuring DJ Sloepoke from LA..

One of the interviews we have is a rare 1991 exchange with 2Pac right after he finished shooting the then unreleased movie Juice.. Here Tupac who had was a part of Digital Underground noted that he considered himself to be the ‘Rebel of the Underground’ and for good reason. He explained that he liked to stir things up and do the unexpected. His goal was to generate excitement and have impact on both the people and situations around them.

2Pac promised to have major impact in the world of hip hop. He’s talked about his acting debut and his character Roland Bishop in the Juice.  He also spoke about his album ‘2Pacalypse Now‘.. The most compelling part of this interview is Pac predicting that regional beefs would tear Hip Hop apart.. Who knew years later he would be embroiled in a bi-coastal East vs West conflict that many feel cost him his life…

The other interview we put together is a recent exchange with 2Pac‘s first rhyme partner Ray Luv..Here Ray talks about the early days of Bay Area Hip Hop and how him and 2Pac started out as rivals…Interestingly enough, Ray and Pac lived outside of the Bay Area’s main centers for Hip Hop, Oakland, San Francisco  and Vallejo..

Ray lived in Santa Rosa, where he sported the name  MC ROC.  Pac lived in Marin City which was 40 miles away under the name MC New York. They knew about each other thru tapes in which each would take shots at each other as they battled for top honors in the Marin County, Sonoma County corridor.

Ray explained how a woman named Leila Steinberg who would eventually become 2Pac’s first manager linked the pair. On their first meeting they hung out for more than 5 hours and recorded several songs.. Later with Steinberg they would form a writing a group which led to the formation of the 2Pac’s original group Strictly Dope. 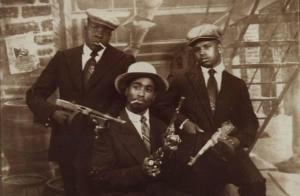 Ray Luv, 2Pac and DJ Capitol B of Strictly Dope

In our interview Ray talks about how Pac insisted that they drop their emcee handles and use their real names. he felt it made them more authentic to the community. He also talks at length about the intense writing process him and Pac had.. They pushed each other to write long and often. They were also pushed to open up and show a certain type of vulnerability in terms of sharing their inner thoughts, experiences and struggles. It was through this writing that we see such honesty and bold frankness in many of Pac’s songs. Ray also noted how they would often write rhymes for each other..

Lastly Ray talks about the strong friendship and relationship they had with each other up to Pac’s death. They are currently finishing up a documentary that will feature many of Pac’s friends who up till now have not spoken too much.. Ray says even after all these years, people still feel the pain of Pac’s absence. Below is our Breakdown FM/ All Day Play intv w/ Ray Luv

We also have a super dope All Day Play Breakdown FM Tupac Tribute Mix from LA’s DJ Sloepoke.. This brother is at the top of his game as he brings serious heat in what we call 2Pac vs DJ Sloepoke  In this mix Sloepoke pulls out some of the original songs that were sampled in some of Pac’s biggest songs.. We preceed Sloepoke’s mix with a collage of short intv and commentary on Pac… Enjoy..

Click the Link below to listen to DJ Sloepoke’s mix

There’s huge birthday celebration tonight Wed June 13th at the Mezzanine in SF where many of 2Pac’s friends, family and crew including Mac Mall, Rapping 4Tay, Selassie and Ray Luv will be on hand, performing and offering words of praise and insight.

This Saturday, Digital Underground and members of the Black Panther Party will be doing a special show and fund-raiser in celebration of Tupac.. at Yoshi’s Niteclub in SF..