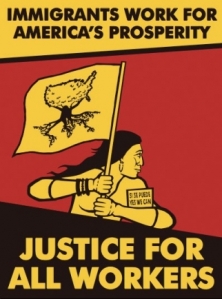 Today is May Day and many will be taking to the streets to express a variety of concerns. First and foremost around the world is worker’s rights…This is important.. All one has to do is look at the recent fires and building collapse in Bangladesh where over a 1000 people have died to understand that corporate tyranny is the order of the day.  One must remember all those workers who died were making goods for pennies a day under harsh slave-like conditions for Western companies including Walmart and H&M to name a few, who all refused to improve working conditions in spite being warned that disaster was right around the corner..

Smashing down on wages, keeping people in a state of economic fear and demanding folks skip vacations, forgo overtime, work longer hours while they rake in obscene profits that are not shared with workers or the surrounding community is a trend all must oppose.

On top of that many of the Draconian Laws via lobbying organizations like ALEC that allow for our privacy to be compromised, that threaten our safety while leaving corporations immune to lawsuits and overall accountability is another trend that must be opposed at all costs…We should not forget the damage done by corporate interests around Citizens United where these 1% corporate outlets can pour unlimited amounts of money into elections..We should not forget that a number of our corporate media outlets and banks have invested in private prisons…

There will be some who are reading this who are so thirsty to be put on by some employer that they will go along with the program and like a backwards thinking slave, will actually be a stronger, more strident voice for the corporate interests than the corporate owner himself…That’s a short-sighted position and one should really rethink why they are riding so hard for outfits that do so much global harm… 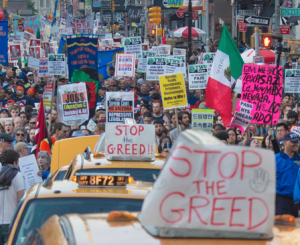 Finally today on May Day there will be many who are seeking better conditions for those who are immigrants and undocumented. Some will say ask does this have to do with labor issues? It has everything to do with them.. To the degree that corporations are able to exploit people for cheaper labor affects us all both in wages and overall conditions.. One best be happy that we see folks out in the streets by the thousands in both here at home in immigrant communities as well as in so-called Third World countries demanding better treatment, living wages and the same rights to be global citizens as the corporations..

One must remember the reason why so many folks leave their homes looking for a better way of life in other places is not because of so-called freedoms per say.. It’s because corporate interests have raided their lands and wrecked havoc on the economy, resources and respective political situation…May Day is about putting an end to exploitation and I hope many of y’all who are reading this take this to heart and do better by your fellow workers.. Don’t buy into the BS that many corporate outlets that they are somehow suffering…Their success is based upon our collective labor efforts.. and thus everyone is deserving of a piece of the pie sans the exploitative aspects

From the debate raging online and via twitter, I see miseducation is alive and well. Workers from teachers to firefighters once called public servants are now being called freeloaders. It reminds me of something RZA said in the documentary, Rhyme and Reason [paraphrasing]:why am I beefing with this brother and he has nothing and I have nothing while these other folks over there have everything and nobody is beefing with them. That doesn’t add up..I deal with mathematics.

Well, here are some numbers to consider:

1. The Walmart Corporation is richer than over 150 countries.

2. And a good amount of that wealth goes to 4 people: The Walton family members who take 4 of the top 10 spots on the Richest Americans list, with net worth totaling 80+ billion dollars.

4. And for the most staggering numbers: the 500 richest individuals in the world have the same income as 416 million people on the poor end of the pay scale….416 million.

Probably the two most dreaded words in American politics = class warfare. But they are still embraced quicker than these two hated four letter words: Karl Marx.

The reason Karl Marx is so feared is because he rightfully exposed the fallacy of wage labor.

Capitalism is a way to make money off of other people’s labor. But Walmart could not make any

sells [usually Chinese workers making slave wages], or the employees that provide the labor and customer service at its’ stores [making near slave wages with few benefits], or the customers who buy the goods its’ WORKERS produce [and those customers are spending money that they earn working for (sometimes near slave) wages ].

Marx predicted that this alienation (outlined above) would eventually lead to class consciousness…and the truth is, we may finally be seeing forms of class consciousness playing out all across the globe as we speak..from Egypt to Wisconsin…Bahrain to Iran. And the bigger truth is, we have corporate fascists and overreaching leaders to thank. As I’ve said many times, power will take as much as it can get away with and no less…people must fight for what we rightfully deserve. No one will give it to you.

The choices in this country could not be clearer.  On one side is the language of “cuts” and “deficits” and “sacrifices”, but in this language only one side of the coin is being shown. As I tell my classes all the time, one’s advantage is directly linked to another one’s disadvantage. They are inevitably linked. The big lie that hegemony in society perpetuates is that folks gain at no one’s expense. But on a finite planet, the pie of resources is limited. And how it is dished out at the dinner table matters. If one person takes 99 slices, that leaves 1 slice for 99 people to fight over. The other option is a more equitable distribution of resources. Only people that get more and are okay with others having less prefer the former.

What free trade did to the private sector, political corporatists are now trying to do to the public sector…weaken collective bargaining and workers’ rights. Instead of all seeing the reality of a new guilded age where the rich are getting richer, the middle class is being asked to accept the new “reality” and join the ranks of the working poor while big banks get bailed out with our tax dollars so they can horde that cash or use it to open markets overseas.

The truth the U.S. middle class has not been told is that it is expected to join the global race to the bottom, where we will be expected to compete in a global market where workers make less than a dollar a day. They are setting up Americans to “sacrifice” …to get used to a lower standard of living and accept this new world order where a small elite of corporate fascists get 95% of the pie while 95% of the world must fight for the 5% crumbs…including you now America.

Unfortunately it never is the 1% that does its own bidding…it always is the manipulated who have bought in to the narrative that the elite has sold them. People that believe that giving tax breaks to corporations and busting unions will bring jobs to America have no geopolitical sense of reality.

Instead of bashing me and my fellow union members for collective bargaining and securing better wages and benefits, why not demand the same for yourself?! Stop doing the bidding for corporate fascists and start putting your interest first!

Despite the resistance to change by some, resolve and growing class consciousness may be too strong to stop this time. But know this, even where peaceful protest can not overcome police state barbarity, universal law will. The house of cards will fall…it always does.

For more on this topic. please see my previous note: The Fire this Time: A Few Thoughts on Egypt