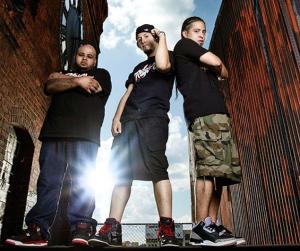 Glad to see Rebel Diaz and the RDACBX Collective are standing strong and pushing back hard in spite of the set backs imposed on them by the greedy developers in the Bronx, NYC and its gentrification projects and the FEDs.. After the group painted a mural on the walls of their community center, bringing attention to political prisoner Mumia Abu Jamal, there was a chilling response from those in power.. The building owner refused to sell the space to the group and he refused to take their rent or negotiate for new terms… He also never expressed concern about the mural..but nevertheless the group came to learn it was a trigger..

As they noted in a recent press conference, RDACBX is not limited to a building, it’s the spirit of the community and that community is everywhere and expanding..Their latest project is a song and dope video that pays tribute to the late Venezuelan President Hugo Chavez who was a big supported of the South Bronx community center the group and the neighborhood built.

Here’s what they penned about the video..

The direct connection we have with the The Bolivarian Revolution is
that our community space The Rebel Diaz Arts Collective -BX (RDACBX)
was directly funded by Venezuelan owned oil company- Citgo. For 4 1/2
years we received direct assistance from Comandante Hugo Chavez and
the people of Venezuela.

This song is our tribute to him as we consider him to be a champion of poor people around the world. Hugo
Chavez supported Hip Hop in The South Bronx. Hugo Chavez is Hip Hop.
Our community space was violently shut down on Feb. 28th by The NYPD and federal
marshalls. We know what it is. We were a threat because we were
teaching the youth, speaking out against Stop and Frisk, doing
political graffiti, doing open mics, etc.