Today is May Day and many will be taking to the streets to express a variety of concerns. First and foremost around the world is worker’s rights…This is important.. All one has to do is look at the recent fires and building collapse in Bangladesh where over a 1000 people have died to understand that corporate tyranny is the order of the day.  One must remember all those workers who died were making goods for pennies a day under harsh slave-like conditions for Western companies including Walmart and H&M to name a few, who all refused to improve working conditions in spite being warned that disaster was right around the corner..

Smashing down on wages, keeping people in a state of economic fear and demanding folks skip vacations, forgo overtime, work longer hours while they rake in obscene profits that are not shared with workers or the surrounding community is a trend all must oppose.

On top of that many of the Draconian Laws via lobbying organizations like ALEC that allow for our privacy to be compromised, that threaten our safety while leaving corporations immune to lawsuits and overall accountability is another trend that must be opposed at all costs…We should not forget the damage done by corporate interests around Citizens United where these 1% corporate outlets can pour unlimited amounts of money into elections..We should not forget that a number of our corporate media outlets and banks have invested in private prisons…

There will be some who are reading this who are so thirsty to be put on by some employer that they will go along with the program and like a backwards thinking slave, will actually be a stronger, more strident voice for the corporate interests than the corporate owner himself…That’s a short-sighted position and one should really rethink why they are riding so hard for outfits that do so much global harm…

Finally today on May Day there will be many who are seeking better conditions for those who are immigrants and undocumented. Some will say ask does this have to do with labor issues? It has everything to do with them.. To the degree that corporations are able to exploit people for cheaper labor affects us all both in wages and overall conditions.. One best be happy that we see folks out in the streets by the thousands in both here at home in immigrant communities as well as in so-called Third World countries demanding better treatment, living wages and the same rights to be global citizens as the corporations..

One must remember the reason why so many folks leave their homes looking for a better way of life in other places is not because of so-called freedoms per say.. It’s because corporate interests have raided their lands and wrecked havoc on the economy, resources and respective political situation…May Day is about putting an end to exploitation and I hope many of y’all who are reading this take this to heart and do better by your fellow workers.. Don’t buy into the BS that many corporate outlets that they are somehow suffering…Their success is based upon our collective labor efforts.. and thus everyone is deserving of a piece of the pie sans the exploitative aspects

Last night I drove by Best Buy in Emeryville to peep out what was going down with all the so-called door buster Black Friday drama..To say the least it was madness.. More than a 1000 people stood on a line that wrapped around the store and under the freeway when I arrived at 11:15..There was at least 4 squad cars and other security present to keep folks from acting gully, Something about the whole scene wasn’t right..

First thing that went through my mind was how what was supposed to be a festive family oriented time where we fellowship with one another and give thanks for what we have, has turned into an over hyped shopping day, where the focus moves from ‘appreciation and thanks for what I got’ to anxiousness and even anger for expensive things we are told we ‘want’ and told we ‘need’
It was just a few years ago many expressed discomfort about having stores open up so early, around 6 am for so-called door busters. Many the early store openings were cutting into precious family time. With each passing year things got more and more hectic to the point that several people died after being trampled when doors were opened..

Now we have a situation where folks are standing on long lines on Thanksgiving Day.. In fact people were camped out, in tents complete with cooking utensils. Thanksgiving is now an all out shopping day.. 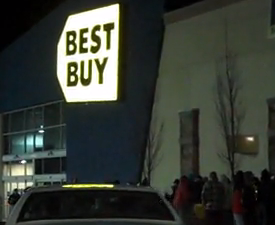 Last night just as it neared midnight, I saw families with kids in tow running frantically to get on-line. People were driving erratically trying to find a parking space. Others were trying to make deals with folks standing toward the front of the line to get them a particular item for a fee.

Last night what I saw was a line that reminded me of what you would see at a crowded amusement park..At certain points even after the store was open, there was still a half hour, hour maybe even two-hour wait to get inside to spend your money.

Second thing I noted was how these sales which have knocked prices down 40-60% for many electronic gadgets and TVs underscored how inexpensive these items really are in the first place. A TV that sold for $600, now reduced to $150 was probably made for less than $30 somewhere overseas, where people stand on equally long lines desperate for food, clean water and clothing while we stand on lines to purchase gadgets that we really don’t need.

It was interesting to see that many of the items that drew folks to stand in these long lines were limited. You weren’t guaranteed to get 50″ flats screen TV for $150.00.. But after standing on-line for several hours you were gonna pony up and buy something..Last night I saw hecka folks who wanted TVs come out the store with something else..

Maybe ‘legally’ it wasn’t bait and switch, but it sure seemed that way at the end of the day. People had the attitude they were gonna buy something no matter what. With all the media hype, nobody wanted to leave empty-handed and left feeling like they missed out..

The last thing I noted was how this Black Friday thing has morphed into some sort of bizarre sporting contest. The coverage reminds me of what we see on Sunday when they report around the country about football games.. For Black Friday, you had corporate news anchors spread out all over the country reporting the haps inside malls that ironically have the exact same stores and layouts from coast to coast.

In one scene you have the reporter from Ohio all amped up talking about how there were 3 hour waits and no parking to get inside the mall. Footage of people frantically rushing inside when doors are open accompany his remarks..That’s the money shot reporters are living for..

Next thing we know we have a reporter standing inside the Great Mall outside Minneapolis.. He’s hyped up about how record crowds have showed up, aerial footage showing snaking lines are shown as he seemingly tries to out do the earlier report in terms of how ‘out of control’ things were earlier that night when doors open..

Another reporters standing at a new mall in Livermore , Ca brags about how it the 580 Freeway was almost shut down because there were so many cars were trying to get off at the mall exit. The reporter gets excited as he tells a story of a couple who flew in from Mexico and gave the store manager their luggage so they could go shopping.. It’s pure pandemonium everyone needs to rush on out and wait in line for 2 hours to find parking..

Soon as he’s done we get another report about how insane people are.. One report shows a guy in Sacramento who was being pushed as stores opened before midnight. This man became so enraged that he threatened to stab the next person who bumped him.

The scene quickly switches to another report where angry shoppers are complaining how they stood on lines for hours only to find they had two or three TVs in the store.. The scene quickly switches to a man angry that he didn’t get a ticket to buy a TV but some guy who wasn’t on-line somehow got one. The guy in question explains that he’s an employe of the store and he’s getting his Black Friday shopping on.. We’re left seeing this man talk about how unfair it all is..

Next we cut to a scene showing people sleeping in tents and cooking meals for folks and talking about how they found a ‘new’ family of friends who camp out every year waiting to get deals.

At the end of the 5-10 minutes worth of Black Friday reporting , we have an economics expert come on and tell us that these long lines are indications the economy is recovering and folks and the midnight mayhem is a good thing..

With the emergence of Black Friday, we now have an artificial GMO type of holiday, where the focus has shifted from festiveness to desperation. The focus has shifted from people rushing out to get ‘deals’ to save money as they buy special Holiday gifts for family and loved ones to folks standing on-line to get stuff just for themselves. There were no wrapping tables and gift cards being given out..There was also very little coverage or acknowledgement of folks protesting at Walmart for unsafe and unfair working conditions

Last night was a strange exercise, it kinda reminded me of Hunger Games, where people were being pushed into frantic action. In this case we were all being pushed from all angles in corporate media to shop like your very life depended on it..Heck I even gave in and wound up buying a couple of pen flashlights after I realized there were no more cheap 50″ HD flat screens to be had.