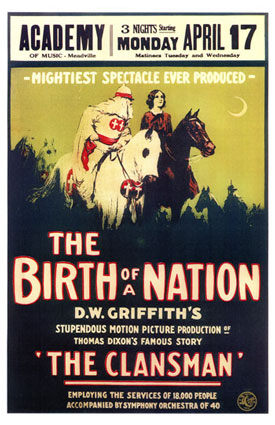 It’s important that we remember a couple of  old sayings 1-‘Nothing is new under the sun‘ and 2-‘If you don’t learn the lessons of history you are destined to repeat it‘.  Many people have forgotten about or never knew about DW Griffiths landmark film ‘Birth of a Nation‘. It was taken from the book ‘The Clansmen‘ which depicted newly freed Black slaves running the government and causing the country to fall to pieces. The movie showed that this country was falling until an organization was formed that gave rise to the country and restored order. That outfit was the Ku Klux Klan‘.

The part that most people know about Birth of a Nation is the Reconstruction.. Here’s a clip and brief synopsis

Stoneman and his “mulatto” protegé, Silas Lynch, go to South Carolina to observe the expanded franchise. Black soldiers parade through the streets. During the election, whites are shown being turned away while blacks stuff the ballot boxes. The newly elected black legislature passes laws requiring white civilians to salute black officers and allowing mixed-race marriages.

Meanwhile, Ben, inspired by observing white children pretending to be ghosts to scare off black children, devises a plan to reverse the perceived powerlessness of Southern whites by forming the Ku Klux Klan. Elsie is angered by his membership in the group.

Then Gus, a former slave who became educated and gained a title of recognition through the army, proposes to marry Flora. Scared by Gus’ lascivious advances, she flees into the forest, pursued by Gus. Trapped on a precipice, Flora leaps to her death. In response, the Klan hunts Gus, tries him and finds him guilty, kills him, and leaves his corpse on Lieutenant Governor Silas Lynch’s doorstep. In retaliation, Lynch orders a crackdown on the Klan. The Camerons flee from the black militia and hide out in a small hut, home to two former Union soldiers, who agree to assist their former Southern foes in defending their Aryan birthright, according to the caption.

Meanwhile, with Austin Stoneman gone, Lynch tries to force Elsie to marry him. Disguised Klansmen discover her situation and leave to get reinforcements. The Klan, now at full strength, rides to her rescue and takes the opportunity to disperse the rioting negroes. Simultaneously, Lynch’s militia surrounds and attacks the hut where the Camerons are hiding, but the Klan saves them just in time. Victorious, the Klansmen celebrate in the streets. The film cuts to the next election where the Klan successfully disfranchises black voters and disarms the blacks. The film concludes with a double honeymoon of Phil Stoneman with Margaret Cameron and Ben Cameron with Elsie Stoneman. The final frame shows masses oppressed by a mythical god of war suddenly finding peace under the image of Christ. The final title rhetorically asks: “Dare we dream of a golden day when the bestial War shall rule no more? But instead-the gentle Prince in the Hall of Brotherly Love in the City of Peace.” 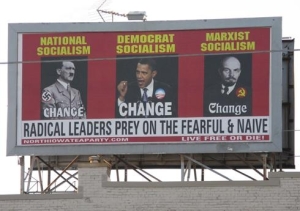 People should take a look at some of these clips and think about whats going on right now with the anger and racial hostility attached to your modern-day Tea Party and sympathizers.  There’s a study that by the University of Washington and the NY Times that shows the motivation behind the Tea Party was ‘conservatism’ (a desire to return to the good ole days) and the election of Barack Obama. We will be doing a radio show this week where the folks behind the study will go into great detail explaining all their findings. It’ll blow you away.

The other thing about the Tea Party is, it’s a media creation. The information, tone, marching orders are all rooted in a large network of right-wing media outlets  and personalities with Fox being the centerpiece.

The word used to describe this phenom is Videocracy... the use of media to move people politically. This happened in Italy with media mogul and its current President Silvio Berlusconi. There’s a documentary called  Videocracy that focuses on Berlusconi and his 30 year media reign over Italy and the impact that’s had. Needless to say he went all out to prevent the showing of this film on his vast networks.

This concept of Videocracy was also shown in Oliver Stone‘s new film South of the Border where he shows how media corporations including our own CNN has been used to push political agendas, help launch coups and  undermine democratic process in various countries.  Berlusconi’s ascension was called a coup of sorts and if the Tea Party creation becomes politically successful it’ll go down in history as a coup as well. 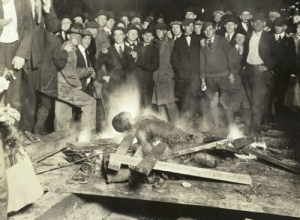 We need to keep all this in mind when looking at the clips from Birth of a Nation and recall all the increased lynchings, attacks and race riots that took place during the first few years after this  film was released. The most notable was the Red Summer of 1919. The movie  (media) created a hostile climate that lasted for years.

We should also keep in mind that the newly formed NAACP denounced the film while filmmaker DW Griffith emphatically denied the film was racist. If that wasn’t enough then President Woodrow Wilson not only gave the film two thumbs up.  He said  ‘It’s like writing history with lightening’. He added, that  his only regret was what the movie depicted was terribly true.

It’s hard not to draw parallels with the emphatic denials of racism by Tea Party leaders while witnessing the enthusiastic endorsement of racial hostility by political leaders and media pundits here in 2010. From the racial charged remarks of radio talk show host Michael Savage and Rush Limbaugh to the overtly racist remarks by politicians like Sharon Angle, Debbie Riddle and Betty Brown one can see the handwriting on the wall. All this is compounded by the fact that there’s been a rise in right-wing hate groups and hate crime. The vitriol, vandalism and attacks we saw around the proposed ‘Ground Zero Mosque‘ (Park 51)  the other month underscored that point.

The bottom line is that we now have a climate where any shortfalls or discomfort will be scapegoated to people of color who have growing political, economic social power.

The other thing to keep in mind, is that  film premiered in Los Angeles which shortly after housed the largest Klan chapters in the country. The KKK was so powerful that in early 20s the group began protesting Hollywood’s film industry because of two films ‘The Pilgrim‘ and ‘Bella Donna’ which they felt did not depict them in a good light.

The Klan bolstered by the DW Griffith film saw themselves as a reform organization and political entity that demanded legitimacy. What do we see happening today with the Tea Party and its racism which is couched in so called ‘legitimate’ political discourse? 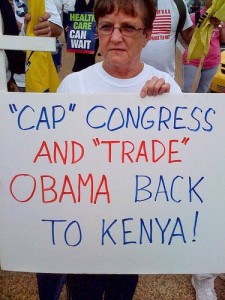 We see them being embraced and held up as a legitimate force that is on a mission to restore America.  For them restoring America means taking away any sort of safety net for those who have have fallen on hard times or are members of groups that have been systematically denied opportunities.

Restoring America means trying to change the constitution to to deny citizenship to Brown folks born here, under the guise of  ‘terror baby‘  and ‘anchor baby‘ threats.

In short restoring America means an aging population of people, scared of change and the Blacking and Browning of America are pulling out all the stops and going full steam ahead to not only hold on to power, but to also suppress those they deem a threat… Watch the clips below and when you get time, the full length feature and you’ll see that many are pushing to have a tragic part of this nation’s history repeat itself.