Yesterday I started getting phone calls and text messages while I was watching the football game on TV. Then I decided to check my email and sure enough there were dozens of emails informing me of the passing of Teena Marie.

The sheer volume of this indicated that it was probably true, however there were no details in any of these reports and I have certainly learned over the years, that getting the story right is far more important than getting the story.

The other thing I have learned is that most folks don’t really care anyhow, they just want to tell others that someone has died, and unfortuantly the internet makes that far too easy to do. Meanwhile not a single one of those people seem willing to say just why Teena Marie was important to them and what her passing means to them personally and perhaps why it might be of significance to the rest of us.

I waited till I got something in writing from an official source (her record label) before I published anything about the passing of Teena Marie on the www.soul-patrol.com website. I also wanted to publish Teena Marie’s own audio commentary just to remind us that surely she just might regard the current internet fuss over her passing as absurd and to keep it all in perspective.

–This morning I see evidence of people having online fights about who was first to announce her passing. I wonder what Teena Marie would have to say about that?

–I also see evidence of lots of folks online posting what they consider to be the cause of her passing. I don’t know what the cause of death was, and I certainly don’t need to know right at this moment. I’ll just wait till someone releases a coroners report?

I’ll try to write something later about just why I thought she might be significant to our society. But it’s actually not a hard thing for me to figure out why she was signifigant and an inspriration to me personally. 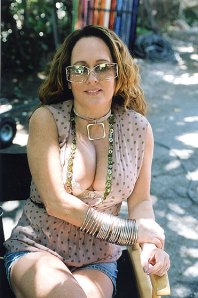 Everything about Teena Marie starting with the way I was first introduced to her in 1979 to the thoughtfulness, depth and class that she carried herself with over the past few years all spoke to the future. It spoke to the notion that we could be better to each other, ultimately better for each other and that it really shouldn’t be so difficult to do so. Her music from 1979 – 2009 spoke to me on a personal “kozmic” kinda level that offered such hope on both a micro and meta scale. That kind of longevity and commitment to inspire people to be better is something to be admired and emulated.

At the end of the day, she was “just another funk artist.” Just being able to understand the real vision of what a true funk artist is, and to understand that even in 2010 that Teena Marie still held true to that old fashioned (hippie) vision, right in the face of today’s ultra popular selfishness/greed, for me personally is why she was significant.

And that is what has led me to write about Teena Marie from my own perspective here on the Soul-Patrol.com website at the following link, http://www.soul-patrol.com/funk/teena.htm off & on for the past 15 years whenever the mood has struck me. And my guess is that I will continue to do just that…

“ain’t no gumbo without the roux…”
–Congo Square (Teena Marie)

Written by Bob Davis of Soulpatrol.com

check out his reviews and writings of Teena Marie HERE