Was peeping this recent video from Hiero directed by Casual who recently did a song and video addressing gun violence in their native Oakland..The song added to the nationwide highly controversial debate about gun control.

“We are not promoting guns or violence,” explains Tajai (Hieroglyphics / Souls Of Mischief), “but simply expressing our thoughts on the issue and encouraging further dialogue.”

Adding to the conversation is Snoop Dogg aka Snoop Lion who teamed up with Drake and his daughter Cori B to give their take on gun violence.

In watching those two video,  I got to thinking about how divided folks within Hip Hop have been on this topic over the years. While its probably safe to say, when asked very few would advocate violence, but there have been quite a few artists ranging from  Ice T to Spice 1 who have said absolutely ‘No’ to retiring their guns..While rap peers like Pharaoh Monch and Nas have given voice to the harms of hot led flying through our community.

Of course we had last year’s famous twitter debate between NRA member Killer Mike and Boston emcee Akrobatik. This is the fullexchange which was captured by the good folks over at The Rap Up. 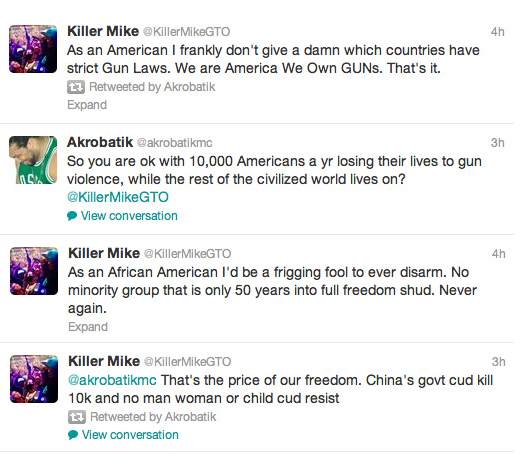 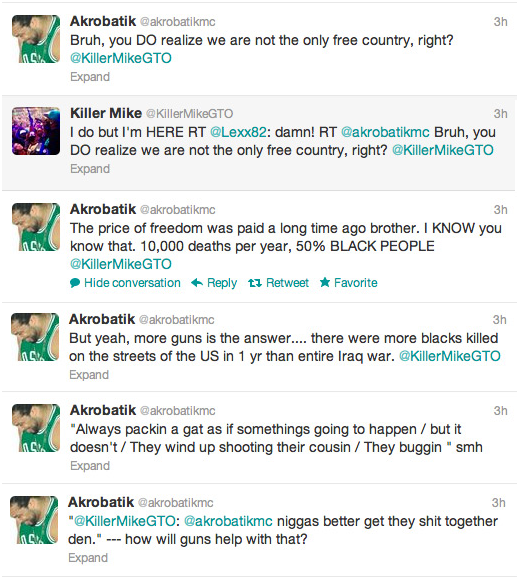 That debate reminds of the ones that jumped off back in the days when Ice Cube’s old group, Da Lench Mob, made it clear that the AK-47 was essential for us to get our freedom… How many of y’all remember this video and these searing lyrics?

An AK talks but bullshit runs
I wish I had time to count all my guns
‘Cause a nigga is runnin’ out of funds
But H.Rap says “Freedom got a strap!”
[I wish I was in dixie Ak Ak
Then shit wouldn’t have been bad in the sixties
No way No way]

We also have long time gun enthusiast Bay Area rapper E-A-Ski who came on my radio show and got into a heated debate with gun control folks..He like Killer Mike who came on the scene years after, has long argued against banning guns. He did this popular song back in the days called ‘Blast if I Have To‘