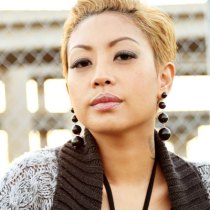 Rocky Rivera is an accomplished journalist-turned-emcee whose editorials appeared in XXL, The Source and Rolling Stone Magazine before she decided to pursue an artist’s life.  Trading her moleskines for microphones, she’s dropped three musical projects since 2008, Married to the Hustle Mixtape, the self-titled album, Rocky Rivera, and the recent POP KILLER MXTP.  Her debut album was released in 2010 and since then, has garnered critical acclaim and press coverage from VIBE, 2DopeBoyz.com, Refinery29, and numerous music blogs across the web.

In 2012, Rocky became the only female artist at the VIBE HOUSE’s Respect The West Showcase at the SXSW Festival, sharing the stage with West Coast favorites such as Nipsey Hussle, Strong Arm Steady, Snoop Dog and Kendrick Lamar.

In the past, she’s opened up for diverse artists such as Zion-I, Macklemore, Blue Scholars, Pac Div and dead prez.

For more info check for at http://www.rockyrivera.com/

Below is my Hard Knock Radio intv w/ Rocky Rivera

This is one of my favorite songs from Rocky.. Lyrics are revolutionary and deep..