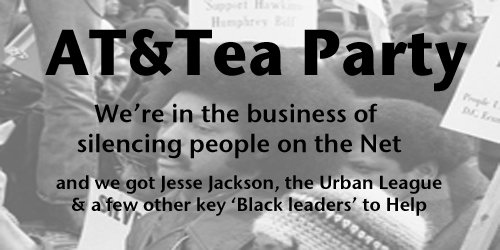 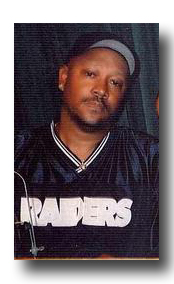 These are indeed strange times we live in where even when we’re repeatedly told we should not be surprised as to what goes down, especially in the world of politics-goes down. It was surprising to learn that AT&T is one of the biggest backers of the Tea Party and together they are working overtime to try to get rid of the Democratizing concept that has made the Internet so powerful called ‘Net Neutrality‘.

I guess one shouldn’t be shocked at the hypocrisy of the Tea Party which claims it takes issue with big corporation but then generously supports their agenda. I’m more upset with Apple which uses AT&T and upset that my hard-earned money which pays for this Iphone is going to uplift a political party that many of feel are racist and in opposition to many of our concerns.

As for Net Neutrality, for those who don’t know about this concept, it essentially says all data is to be treated equal. This means the little blog in the middle of Iowa can be accessed just as easily as the NY Times in NY. All websites are essentially one click away metaphorically speaking.

What telecoms have been doing to the tune of over 100 million dollars in lobbying money in 2009 alone with AT&T leading the way is try to change the basic structure of the internet and re-create the very conditions that drove us away from traditional media to the internet in the first place.  Instead of everyone being ‘one click away’ they want to create a tiered system where websites and companies who pay top dollars are one click away while everyone else could be 2, 3, 4 or not even on the system at all.

This means if I am living in Oakland, California and wish to present additional information to the rest of the country about some important event like the tragic Oscar Grant shooting from 2009 I would no longer be on par with the mainstream outlets.  My information could be slowed down or even blocked.

Hence, someone in NY might click on the Oakland Tribune site and get the information immediately, but it might take a couple of hours or maybe even a day or two to be visible to on my website DaveyD.com or the websites Indy media SF, Colorlines, Youth Radio or the SF Bayview. The sad part is that person in NY might not even know this additional information had been slowed down or suspended by AT&T, Comcast or some other ISP that may have a political agenda that they want to carry out that is in stark contrast with your content.

The person on the receiving end of the information will do as they’ve always done since the internet been around and click on a link expecting to move seamlessly from one site to the next. When one site is slowed down or not accessible they move onto another. So again what AT&T wants to do is make sure the NY Times loads up quickly while the small blogger comes up slowly.

When one considers how so many people have been able to come up, challenge traditional media with other facts and various narratives to a story, net neutrality has leveled the playing field.  Unfortunately the big telecoms do not want this..and apprently neither do the Tea Party and several prominent gatekeeping civil rights orgs and politicians they have spent money on. 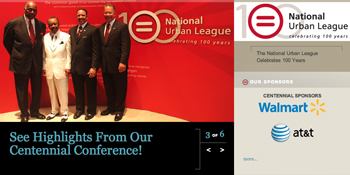 AT&T sponsored National Urban League Centennial Celebration. Was that part of their strategy to reach out to Civil Right orgs and get them to echo GOP talking points on Net Neutrality?

Initially the Net Neutrality debate was partisan with mostly conservative folks against it. AT&T decided that one of their strategies would be to use their money and influence to get key civil rights leaders to come on board. This may have included generous sponsorships they’ve given folks over the years with everyone from Jesse Jackson of Rainbow Push to Marc Morial of the National Urban League whose centennial celebration they recently sponsored.  Their defection and non-commital responses to supporting net neutrality was even welcomed and celebrated by top conservative bloggers like Andrew Breibart the man behind the Shirley Sherrod controversy .

Jackson has noted both in his statement to the FCC and publicly that he and Rainbow Push give ‘voice to the voiceless’. How does one have a voice without Net Neutrality protections?

Even more troubling is seeing members of the Congressional Black Caucus standing alongside the AT&T/Tea Party. How does this happen in 2010 where CBC members were just a couple of months ago complaining about racism where they were called ‘Nigger’ and being spat upon by the Tea Party members, are walking now hand in hand? Oh yeah that happens when big time lobbying money enters the picture. I guess folks can afford  to buy a clean handkerchiefs to wipe away the spit and ‘let bygones be bygones’ as far as the racial insults are concerned as they all stand under the money tree-lined umbrella of AT&T. Peep this article called ‘Hey, Capitol Hill: Who’s Your Daddy ? AT&T‘ to get a better understanding the pervasiveness of this telecom giant. 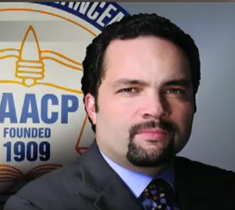 AT&T and the telecoms even got Ben Jealous and the NAACP which relied heavily on the freedoms of the internet to launch a campaign to try to save Troy Davis from being executed to take a ‘neutral position on Net Neutrality. Remind me to let Ben know they spelled the word ‘endorse’ wrong in their clarification statement.

In recent days an online petition was put together by Color of Change pushing CBC members to step up and get on the right side of this issue. That would be away from the position of the huge telecoms.

It’s our hope that all of us stop and take a long hard look at what’s going on with Net Neutrality and not allow this important issue to get away from us the way it did when it came to media consolidation.  If you recall, back in the days leading up to that landmark telecommunications bill of ’96 we heard similar arguments from the big media corps on how giving them all this power would be a good thing for consumers. We also saw there were handfuls of Black and Brown folks who tried to jump in bed with the Clear Channels of the world. They were told they would have better opportunities. Have things gotten better since  the Consolidation? Turn on your local radio station and the answer is more than obvious-‘Hell Naw’.

The ‘Clear Channeling of media has been horrific. Again, its the main reason so many of us fled to the Internet. We wanted something better. We wanted our individual voices to be heard.  If we allow the telecoms to gut Net Neutrality with the help of the Tea Party and a handful of civil rights leaders leading the charge we will be talking about what a big mistake this was 15 years from now. Don’t let history repeat itself.