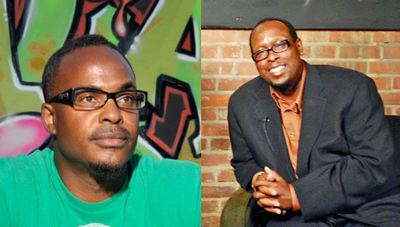 HKR ..The other day we sat down with two long time activist/ educators and Hip Hop practitioners, Refa 1 and Mark Anthony Neal to talk about media images of Black people and how it impacted the George Zimmerman trial and folks in general being profiled. We also talked about Hip Hop and how its being used and misused and the steps we must take to push back on corporate dominance.

Refa 1 who is a pioneering aerosol artist who spoke at length about the importance of us controlling our own images and narratives. He noted that Hip Hop started out being something that we controlled and we allowed it to be turned over to corporate entities who literally turned its meaning and message upside down. he talked about the work he’s been doing with Black writers from all over the world to reclaim image and to set new standards for others to follow. He also spoke about the importance staying connected to the hood and doing work in the hood so that folks who are easily influenced can see quality work right in front of them..

Mark Anthony Neal is a professor at Duke University in North Carolina and the author of several  books including his most recent one ‘Looking For Leroy Illegible Black Masculinities‘  He talked about the ways Black men and Black boys in particular are recognized and not recognized by society at large. In short we are often prejudged and boxed in to fit a certain type of narrative and stereotype.

Neal kicked off our interview by citing an example of how we react when we see a Black boy with  basketball vs a Black boy with a violin.  He explained that for many watching the Zimmerman trial, seeing a black boy as thug has become the norm leaving many with very little leeway to see us any other way. Black boy and Black men are seen as people who have to be contained , policed and controlled.  He went into further detail as to how that plays out in other situations above and beyond the trial.

below is the full interview with both men.. Take listen they drop a lot of knowledge.

This Friday February 4th will be a Historic Moment in Hip Hop. It’s the kick off to the AeroSoul 2 which has been described as a Moral Boost for the Hood. It’s noted as:

This is the First African Mural Diaspora conference in colonial history..It’s  HipHop PanAfricanism Rising to advocate for Black youth. Joining us will be the finest Artist that the Spraycan Art genre has to offer in way of Talent and commitment. There will also be a HipHop Drum Circle on the Turntables provided by The Universal Zulu Nation & DJ 12vles. Dancing… Art… Cultural craft vendors(please bring $ome dough) that will have FRESH & rare items.

Please come out and support the roots of a surging life filled movement. There will also be light horsd’oeures
served throught the evening and the fun will be unceasing. Let’s Bring peace back to Oakland in
style.

We spoke with well known graf writer and freedom fighter Refa 1 who came to our studios and spoke with Hard Knock Radio about the importance of this conference and what he and the scores of artists many of them pioneers who are coming from all over the world hope to get across..He shares with us the impact writers have been having on youth in Oakland. He also reminds us that Hip Hop has been grossly peverted by corporations and thats its time for people who are grounded in the community  to reclaim the culture.

Please view the trailer and follow the links.
http://www.youtube.com/watch?v=HpGMKA4synE

Here’s Refa speaking at our class at SF State

Below is more information on this event…

On the corner of 14th and Campbell in West Oakland, one lone aero soul face sits on

the corner of a wall. The face, once part of a larger mural in progress, is all that remains

of the monument to a fallen young man in the neighborhood.

Along the BART corridor near 51st and Martin Luther King Jr. in North Oakland, a painting

concrete column. It was painted near the very spot where young Gary King ran,

unarmed and in fear, before police bullets entered his back.

Oscar Grant Jr. gleams among roses and sunbeams, a tribute to his untimely death on

With violence claiming their lives daily, many city walls are becoming RIP monuments

for youth instead of a celebration of their existence. Now, re-imagine walls filled with

color and wisdom. Walls for miles etched with the sacred scribings of imagination.

Stepping forth to foster such a vision is the Bay Area Aero Soul Heritage Society, which is

the Joyce Gordon Gallery in Downtown Oakland, CA, and be followed by a month-

With over 40 well-known Muralists from around the globe, this artistic consciousness-

peace, mutual love and healing.  A movement that will enlighten the minds and spirits

of the community at large, sending shock waves of change to a society in desperate

AeroSoul 2 will showcase some of the most cutting-edge, dynamic Black Urban

Calligraphers in the world, featuring artists from Writing’s east coast origins to the new

lettering stylists of the day. Participating and invited artists include: Case 2, Pose 2,

Participating artists will demonstrate the creative benefits of the art form, and promote

the essence of Writing culture, including how it is a means to address many of the social

ills facing the black/brown community today, as well as a tool for collective

craft. The fact that these contributions are rarely shown in their proper historical context

if acknowledged at all has also been a driving force to bring these gems to light.

Oakland Youth, as well as youth across the nation, are facing critical times and taking

empowerment through Art and Hip Hop culture. BAAHS, founded in 1999, is an

organization created to foster community enlightenment in the city of Oakland. Their

arts with an emphasis on Bay Area Spray-Can History.

art and Hip Hop culture.  This satellite Art Exhibit will showcase art by the TCB Crew as well as

work created by East Bay Students, including a special showing of work by youth involved in art

programs at the San Francisco Juvenile Hall Facility.  The reception will also feature a screening

of “Urban Hieroglyphics 3”, a work in progress produced by Chocolate Beats Media and Royal