I recently heard some grumblings from some who are suddenly feeling protective of  CNN pundit Lou Dobbs as they fell back on the free speech argument.

The basic gist of the argument is as follows; “Lou Dobbs has a right to his opinion and what is taking place by Latino organizations rallying and demanding he be dropped is censorship”.

Noting could be further from the truth. Lou Dobbs does in deed have a right to his opinion, but not when it comes to spreading lies and half truths to millions on the airwaves and people can’t rebut. It’s interesting to hear people crying in defense of Lou Dobbs , while those very same people and forces have remained astonishingly silent when former CNN host Glenn Beck led a witch hunt against Green for All activist Van Jones.

Jone’s ‘free speech was called into question from the bully pulpit of the corporate airwaves resulting in Jones resigning from his post at the White House. many feel like he was forced out.  Beck has since gone on to continue his witch hunt for people he personally feels have uttered the wrong ideological opinions past and present.

All it took was a couple of articles and a well placed letter from the widow of the cop who was killed and Hill was fired. News of his dismissal came to Hill via news media. He was never called and personally informed until after the fact. It didn’t matter that Hill had a right to his opinion or that Mumia has always maintained his innocence and millions around the world believe and support him. None of that ‘free speech mattered’.

It was just last week that media pundits launched a campaign to ulster popular media analyst Marc Lamont Hill who is one of the few progressive voices that regularly appeared on Fox News. The two ultra-conservative pundits took issue with Hill’s support of Mumia Abu Jamal who sits on death row and Assata Shakur who escaped the law and is exiled in Cuba. These pundits went to a Fox shareholders meeting confronted News Corp owner Rupert Murdoch and demanded that he get rid of an employee who they felt was out of bounds for supporting a convicted ‘cop killer’.

How this connects to CNN even though these recent happenings occurred on rival Fox, is that as a news media outlets it hasn’t used its bully pulpit to demand that such distortions and McCarthy era tactics cease. It remained silent or  in this instance has participated via Lou Dobbs whose insidious rhetoric  has helped foster a climate that has led to a spike in hate crimes. With that in mind, there should be absolutely no objections to groups demanding Dobbs be dropped. The fact that Latinos groups have to hold rallies in 18 cities, get petitions and go through all sorts of hoops versus a couple of media pundits pushing their strongly felt opinions on the airwaves is a clear indication just how imblanced things are..

You can join the efforts! Scroll down for a list of cities and make sure you download your signs!!!

Community leaders, politicians and faith groups in 18 of the top U.S. Latino media markets are set to rally together in local protest events on Wednesday, October 21stin an effort to increase the pressure on CNN to remove Lou Dobbs from its programming. Calling CNN hypocritical for airing “Latino in America,” an advertising-driven special on Latinos, while at the same time hosting the anti-immigrant rhetoric of Lou Dobbs, the events are part of our BastaDobbs.com campaign, a coalition of Latino organizations from across the country that is led by online advocacy group Presente.org.

“Our message to CNN is clear: You cannot have it both ways. It’s either promotion of hatred by Lou Dobbs or real news regarding the Latino community,” said Isabel Garcia, a prominent civil and human rights attorney in Arizona who is highlighted in the “Latino in America” series and who is also participating in the BastaDobbs.com effort.

“Lou Dobbs abuses the CNN platform to dehumanize and spread fear about Latinos and immigrants. It is no surprise that hard-working Latinos in this country are increasingly victims of hate-motivated violence,” added Angelica Salas, executive director of the Coalition for Humane Immigrant Rights of Los Angeles(CHIRLA). “CNN must be accountable to one of the largest minority groups in the United States if it seeks to gain their following and respect”.

On Wednesday, press conferences and public actions threat of Lou Dobbs on CNN are planned these locations!

CNN’s ramping it’s ‘Latino in America,’ but it’s getting ruined by Lou Dobbs 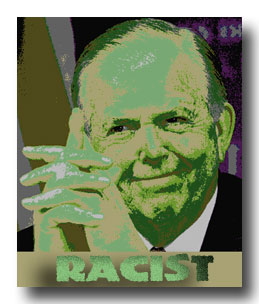 In a few days CNN will launch its ambitious “Latino in America” series. Hosted by the popular Soledad O’Brien, the heavily promoted four-hour program will air on Oct. 21 and 22.

“Witness the evolution of a country as Latinos change America, and in return, America changes Latinos,” is how CNN entices potential viewers on its Web site. The series is a serious effort to capture a larger share of the Hispanic market – and according to some who have seen it, a worthy one.

Ironically, the series comes at a time when CNN has a huge trust problem with Latinos – and its name is Lou Dobbs.

Dobbs, some say, has thrown ethics overboard and has made a career out of vilifying immigrants.

America’s Voice, along with Media Matters, and Presente.org, have called on CNN to dump Dobbs.

“They (CNN) think that a few hours of serious reporting on Latinos by sunny Soledad O’Brien can make up for thousands of hours of anti-Latino extremism from the dark Lou Dobbs,” said Roberto Lovato, of Presente.org and a leader of the movement to dismiss Dobbs.

Through the Present.org Web site, www.bastadobbs.com, over 70,000 people have signed a petition demanding CNN President Jon Klein fire Dobbs. It reads, in part: “As President of CNN, it is imperative that you act quickly and decisively to drop Dobbs from your network, and send the message that CNN does not tolerate hate speech. There should be no place for the likes of Dobbs on the ‘most trusted name in news.’ “

Hate speech has created a hostile environment for Latinos in America resulting in violence and death. The FBI says that from 2003 to 2006, hate crimes against Latinos increased 40%.

Visitors to the Presente.org can watch the eye-opening video, “CNN: Lou Dobbs or Latinos in America?” They can also find some of Dobbs’ most outrageously false claims, such as the 7,000 cases of leprosy caused by Latino immigrants..

Dobbs has also claimed that “Just about a third of our prison system is made up of illegal aliens.”

But the Department of Justice reports that immigrants (legal and illegal) make just 6% of the prison population.

Presente.org is committed to set the record straight.

“For us, ‘Latino in America’ is a teachable moment that we will use to raise awareness about how Dobbs spreads lies about immigrants in his program and opens it to the most dangerous hate groups in the U.S.,” Lovato said. “It is also about raising awareness that by watching CNN, Latinos are disrespecting ourselves.”

America’s Voice and Media Matters planned to run an ad targeting Dobbs during the broadcast of Latino in America, but CNN refused to air it.

America’s Voice says it plans to run the ad on a competing network.

Angelo Falcón, executive director of the National Institute for Latino Policy in New York, points out that Dobbs’ problem (and CNN’s) is “he doesn’t understand the widespread antipathy to him and his race-baiting that exists throughout the Latino community, on its left, right and middle.”

The question CNN must answer is a clear one, Lovato said: “What is it going to be: Lou Dobbs or Latinos in America?”