GoldenUndergroundTV recently released an interview I did with them late last year. I got a bit animated at the end. Only so many interviews in a row I could handle being asked about Chief Keef.

My tirade wasn’t really about Chief Keef. It wasn’t about Gucci Mane or Wocka Flocka or any of the acts spontaneously catapulted into stardom by synchronized mass media coverage despite seemingly universal indifference (at the very best) regarding their talent. Whose arrests, involvement in underaged pregnancies, concert shootouts, and facial tattoos, dominate conversation for weeks at a time, with their actual music a mere afterthought, if thought of at all.

My tirade was about marketing. It was about media powers seeking out the biggest pretend criminal kingpins they can find, (many of whom who shamelessly adopt the names of actual real life criminal kingpins like 50 Cent and Rick Ross), and exalting them as the poster children for a culture. It was about an art form reduced to product placement, the selling of a lifestyle, and ultimately, a huge ad for imprisonment.

This is not my opinion. 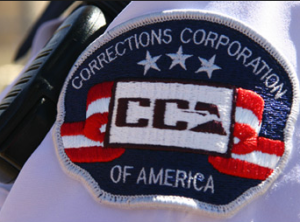 Last year Corrections Corporation of America (CCA), the biggest name in the private prison industry, contacted 48 states offering to buy their prisons. One stipulation of eligibility for the deal was particularly bizarre: “an assurance by the agency partner that the agency has sufficient inmate population to maintain a minimum 90% occupancy rate over the term of the contract.

What kind of legitimate and ethical measures could possibly be taken to ensure the maintenance of a 90% prison occupancy rate?

Two months later an anonymous email was sent out to various members of the music and publishing industries giving an account of a meeting where it was determined that hip-hop music would be manipulated to drive up privatized prison profits. Its author, despite claiming to be a former industry insider, did not provide the names of anyone involved in the plot, nor did he specify by which company he himself was employed. As such, the letter was largely regarded as a fraud for lack of facts.

Ninety percent of what Americans read, watch and listen to is controlled by only six media companies. PBS’s Frontline has described the conglomerates that determine what information is disseminated to the public as a “web of business relationships that now defines America’s media and culture.” Business relationships. Last year a mere 232 media executives were responsible for the intake of 277 million Americans, controlling all the avenues necessary to manufacture any celebrity and incite any trend. Time Warner, as owner of Warner Bros Records (among many other record labels), can not only sign an artist to a recording contract but, as the owner of Entertainment Weekly, can see to it that they get next week’s cover. Also the owner of New Line Cinemas, HBO and TNT, they can have their artist cast in a leading role in a film that, when pulled from theaters, will be put into rotation first on premium, then on basic, cable. Without any consideration to the music whatsoever, the artist will already be a star, though such monopolies also extend into radio stations and networks that air music videos. For consumers, choice is often illusory. Both BET and MTV belong to Viacom. While Hot 97, NYC’s top hip hop station, is owned by Emmis Communications, online streaming is controlled by Clear Channel, who also owns rival station Power 105.

None of this is exactly breaking news, but when ownership of these media conglomerates is cross checked with ownership of the biggest names in prison privatization, interesting new facts emerge.

According to public analysis from Bloomberg, the largest holder in Corrections Corporation of America is Vanguard Group Incorporated. Interestingly enough, Vanguard also holds considerable stake in the media giants determining this country’s culture. In fact, Vanguard is the third largest holder in both Viacom and Time Warner. Vanguard is also the third largest holder in the GEO Group, whose correctional, detention and community reentry services boast 101 facilities, approximately 73,000 beds and 18,000 employees. Second nationally only to Corrections Corporation of America, GEO’s facilities are located not only in the United States but in the United Kingdom, Australia and South Africa.

You may be thinking, “Well, Vanguard is only the third largest holder in those media conglomerates, which is no guarantee that they’re calling any shots.” Well, the number-one holder of both Viacom and Time Warner is a company called Blackrock. Blackrock is the second largest holder in Corrections Corporation of America, second only to Vanguard, and the sixth largest holder in the GEO Group.

There are many other startling overlaps in private-prison/mass-media ownership, but two underlying facts become clear very quickly: The people who own the media are the same people who own private prisons, the EXACT same people, and using one to promote the other is (or “would be,” depending on your analysis) very lucrative.

Such a scheme would mean some very greedy, very racist people.

There are facts to back that up, too.

Prison industry lobbyists developing and encouraging criminal justice policies to advance financial interests has been well-documented. The most notorious example is the Washington-based American Legislative Council, a policy organization funded by CCA and GEO, which successfully championed the incarceration promoting “truth in sentencing” and “three-strikes” sentencing laws. If the motive of the private prison industry were the goodhearted desire to get hold of inmates as quickly as possible for the purpose of sooner successfully rehabilitating them, maintenance of a 90% occupancy rate would be considered a huge failure, not a functioning prerequisite.

Likewise, the largest rise in incarceration that this country has ever seen correlates precisely with early-80’s prison privatization. This despite the fact that crime rates actually declined since this time. This decreasing crime rate was pointed out enthusiastically by skeptics eager to debunk last year’s anonymous industry insider, who painted a picture of popularized hip-hop as a tool for imprisoning masses.  What wasn’t pointed out was that despite crime rates going down, incarceration rates have skyrocketed. While the size of the prison population changed dramatically, so did its complexion. In “‘All Eyez on Me’: America’s War on Drugs and the Prison-Industrial Complex,” Andre Douglas Pond Cummings documents the obvious truth that “the vast majority of the prisoner increase in the United States has come from African-American and Latino citizen drug arrests.” 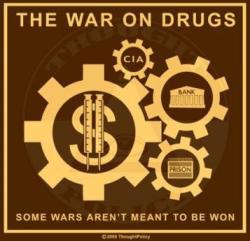 Add to this well-documented statistics proving that the so-called “war on drugs” has been waged almost entirely on low-income communities of color, where up until just two years ago, cocaine sold in crack form fetched sentences 100 times as lengthy as the exact same amount of cocaine sold in powdered form, which is much more common in cocaine arrests in affluent communities. (In July 2010 the oddly named Fair Sentencing Act was adopted, which, rather than reducing the crack/powder disparity from 100-to-1 to 1-to-1, reduced it to 18-to-1, which is still grossly unfair.) This is not to suggest that the crack/powder disparity represents the extent of the racism rampant within the incarceration industry. The U.S. Sentencing Commission reported in March 2010 that in the federal prison system, even where convicted for the exact same crimes, people of color received prison sentences 10% longer . Where convictions are identical, mandatory minimum sentences are also 21% more likely for people of color.

Finally, let us not forget the wealth of evidence to support the notion that crime-, drug- and prison-glorifying hip-hop only outsells other hip-hop because it receives so much more exposure and financial backing, and that when given equal exposure, talent is a much more reliable indicator of success than content.

Yasiin Bey (formerly Mos Def) put it best; “‘hip-hop” is just shorthand for ‘black people.'” Before our eyes and ears, a “web of business relationships that now defines America’s media and culture” has one particular business raking in billions of dollars while another defines the culture of a specific demographic as criminal. Both business are owned by the same people. Mainstream media continue to endorse hip-hop that glorifies criminality (most notably drug trafficking and violence), and private prison interests, long since proven to value profits over human rights, usher in inmates of color to meet capacity quotas. The same people disproportionately incarcerated when exposed to the criminal justice system are at every turn inundated with media normalizing incarceration to the point that wherever there is mainstream hip-hop music, reference to imprisonment as an ordinary, even expected, component of life is sure to follow.

Conspiracy theorists get a lot of flak for daring entertain the notion that people will do evil things for money. Historical atrocities like slavery and the Holocaust are universally acknowledged, yet simultaneously adopted is the contradictory position that there can’t possibly be any human beings around intelligent enough and immoral enough to perpetrate such things.  Even in the midst of the Europe-wide beef that was actually horse-meat fiasco, and the release of real-life nightmare documenting films like “Sunshine and Oranges,” there is an abundance of people content to believe that the only conspiracies that ever exist are those that have successfully been exposed.

The link between mass media and the prison industrial complex, however, is part of a very different type of conversation.

The information in this article was not difficult to find; it is all public.

This is not a conspiracy. This is a fact.

All Eyes on Me.. War on Drugs