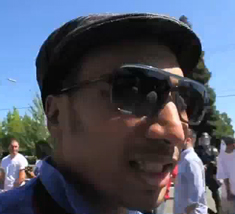 Big shout out to film maker Mooncricket who captured not only the rally that took place for killer cop Johannes Mehserle in Walnut Creek but also caught the ignorance and huge disconnect that many have when it comes to dealing with issues of race and police brutality..

In the clip below you hear the confrontations but more importantly you hear how deeply embedded racial perceptions are. pay close attention to the woman who wants to lecture one brother about genocide in Rwanda and then tells him about OJ Simpson.. It was a constant theme repeated over and over again which suggested that revenge from the OJ trial was sitting on everyone’s mind.

In this video listen to the other woman who attempts to tell us why people get pulled over and profiled and finds it hard to believe the police are doing anything wrong…This same woman is later caught on film yelling that mexicans should go back to Mexico. 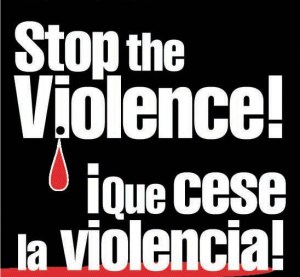 This is an intense confrontation and highlights what’s far too often typical when dealing with issues of police brutality which is a variation of blaming the victim. ‘How come you aren’t here protesting when ‘Blacks are killing Blacks‘ is usually the retort one hears from both whites and blacks when police brutality issues come up. It’s a misplaced argument on a number of levels. First, many organizers are involved in programs, vigils, marches, churches etc about violence in their communities. For example, today Saturday June 24th there was a big Silence the Violence Rally in San Francisco that deals with urban crime. There are dozens of organization in Oakland that were started and still around to help foster conflict resolution and provide alternatives. They range from Youth Uprising to Love Life Foundation, Nation of Islam, Omega Boys Club to Urban Peace Movement etc..Such outlets under different names exist in every city around the country.

The second question that usually pops up is ‘Well if you have so many organizations why is there still crime in the hood?’ The question is a disingenuous one. My experience shows that most who ask those questions have not been involved in many of the community efforts to help push back on crime, yet they’re expecting miracles. The fall back answer that many like to give is that they push back on crime by supporting the police. But even the police are looking for both volunteers and funds for their own programs like PAL and DARE… Those same people asking all these hard questions aren’t involved in those outlets.

Lastly one can look at the huge array of tough 3 strike type laws, harsher sentencing guidelines, zero tolerance directives, higher budgets, new training and weaponry  given to the police over the past 15-20 years and yet crime still persists. Should we not change some things about their approach? 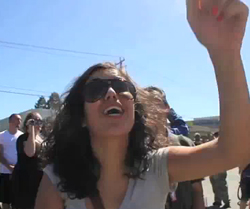 A racist Mehserle supporter screams that people should go back to Mexico.. Wow so this is how they think in Walnut Creek?

With that being said, protesting Black on Black crime is not a criteria for addressing police misconduct. One has nothing to do with the other. The thug on the corner committing crimes is not a public servant. The police are. The thug on the block has not been granted a badge, a license to carry a gun, received months of training and given the trust and duty to protect and serve the citizens of various communities. The police have been given that which means they are directly accountable to the community. The thug has not made that contract with the community and so its bit unreasonable to expect folks to openly confront a criminal the way they would the police to seek redress.

One could easily ask that question to citizens in Walnut Creek or neighboring Concord if they are outside with signs protesting in front of meth houses which exist out there? Are they in front of the homes of people who commit domestic violence or any other number of crimes? …Most aren’t yet they wish to ask all these questions. There’s an old saying don’t ask of others what you aren’t doing yourself?

In the scenes below you see some more intense arguments and some of the blatant racism that folks in the crowd are will to shout out at those who support Oscar Grant.

Below we see the Peaceful ending to rally in Walnut Creek ..As marchers leave and head toward the BART station they come top find the gates have been shut closed on the Grant protesters.

Mumia Abu Jamal weighs in on the Oscar Grant/Johannes Mehserle verdict just as cops and supporters are gearing up to hold a rally for Mehserle in Walnut Creek which is about 25 miles east of San Francisco.

Click the link below where Mumia Weighs in on Lebron James..reflect and weigh in 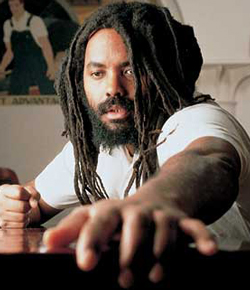 Mumia Abu Jamal weighs in on the Oscar Grant/Johannes Mehserle verdict-Click to HERE to hear his words...

For those who don’t know, Oakland Police used what they called a containment strategy. This is where they had large numbers of police on all 4 sides of a street which prevented folks who came to speak out from leaving. So what this meant was the heavily publicized speak out which was sanctioned and supported by the city of Oakland had lots of folks come to 14th and Broadway and City Hall. At 8’clock the police shut it down as planned.

The police then announced it was an unlawful assembly and people would be subject to arrest if they did not leave. This included everyone from elected officials to lawyers to press who didn’t have the special green cards that the police had issued to corporate outlets embedded with them..

When people went to leave they walked down Broadway toward the city center where they were met by a line of police who pushed the crowd and started marching in the opposite direction..

As the crowd moved hastily back past 14th street to 16th they were met by another line of riot police who told them they could not go past… This meant the crowd of two hundred or so folks turned to go up 14th only to find another wall of police who were advancing forward. This left one way to go which was toward City hall which had its backstage area and other exit points blocked off or into the BART station.

Police closed the BART. So folks were contained in this human box set up by the police who were advancing forward in full riot gear. People got angry and that’s when the Footlocker on broadway got ransacked.  What was not shown on the news was the police in full riot gear were standing right there. Seems to me they could’ve easily moved in, but opted not to, while at the same time preventing peaceful protestors from leaving.  Some of the aggressive behavior is captured in the footage below.. 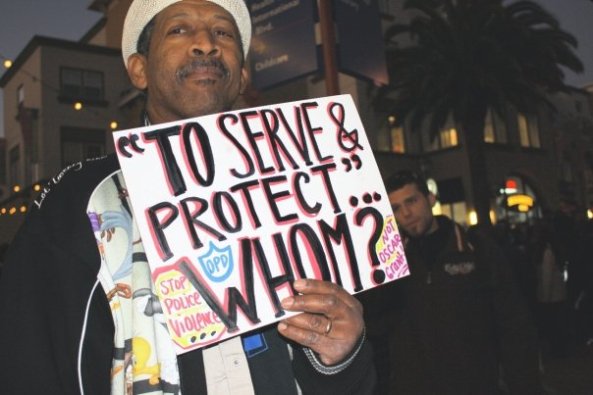 Oakland—Despite claims by Oakland Police (OPD) and city officials that law enforcement used restraint during last Thursday’s protests following the Johannes Mehserle verdict, details emerging paint a very different picture. Police used excessive force against a largely peaceful protest, violently attacking a number of people. Police arrested many demonstrators who had done nothing wrong, and then held them in jail through the night and in some cases through the weekend and beyond.

Among those arrested were NLGSF member, and prominent Oakland attorney, Walter Riley. “Thursday’s law enforcement conduct must be investigated. The police were provocative and seemed determined to instigate violence, which of course, served their police contract negotiations with Oakland at a time when they are facing layoffs of 80 officers,” said Riley. “In the organized rally where protesters, including me, were helping to ensure peaceful protest, the police helped to perpetuate a narrative of violence by allowing a small number of people to vandalize businesses when they could have stopped it.”

Also arrested were Oakland School Board member Jumoke Hinton Hodge, 69-year-old former school principal Susan Harman, journalists and legal observers. Many of the arrestees were seriously injured by the police, including a handful who were taken to the hospital from the scene and at least one individual who was denied medication, causing a potentially life threatening situation to an elderly member of the community.

“Last Thursday a court in Los Angeles sent a disgraceful message about police violence, and that message was reinforced by the conduct of Oakland Police and other law enforcement Thursday evening,” said Carlos Villarreal, NLGSF Executive Director. “OPD and outside agencies brought in as reinforcement used overwhelming force on a largely nonviolent assembly, sweeping up lawyers, legal observers, journalists and community members, and seriously injuring a number of individuals.” 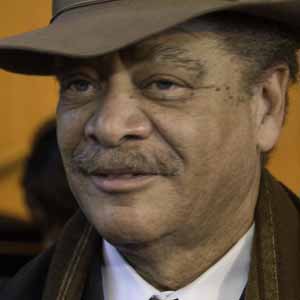 Several years ago the National Lawyers Guild and ACLU obtained a $2 million settlement in a lawsuit over OPD brutality toward demonstrators, and at that time OPD adopted new crowd control policies designed to safeguard freedom of speech in just this sort of volatile situation.

“If OPD had followed its own crowd control policies, the injuries would have been avoided,” explained NLGSF attorney Rachel Lederman. “The aggressive use of police formations, baton beatings and indiscriminate arrests were unnecessary and violated people’s constitutional right to protest. To make things even worse, OPD violated state law by jailing people for long periods of time who had been arrested for very minor offenses.”

The National Lawyers Guild San Francisco Bay Area Chapter (NLGSF) condemns the police abuse by OPD and other law enforcement on the scene and is investigating possible legal action. The NLGSF is a human rights bar association founded in 1937 with hundreds of members throughout the Bay Area. Find out more at http://www.nlgsf.org.