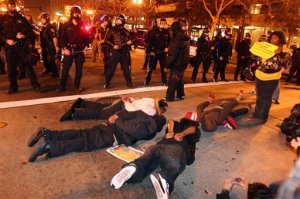 Last year during the Jan 7th 2009 protest, (Oscar Grant funeral/ Oscar Grant Rebellion) many saw a young man with a black hoodie and locks engaging the police about their thoughts and feelings around the murder of Oscar Grant.. The man was seen on tape asking a series of questions about how the cops felt, their thoughts on officer Mehserle whose name was not known to the public and how they would feel if it was one of their kids on the Fruitvale BART station platform that night…The brother would not let up as he spent a good 30-40 minutes going up and down the police line asking each and every officer similar questions… He reminded them that he was a citizen, born and raised in Oakland and wanted to know if he should feel safe riding BART… It was pretty compelling as images of this brother engaging the police were seen all over the world..

I never caught dude’s name being that shortly after filming this, the police were given orders to clear the intersection of 14th and Broadway..The guy in the black hoodie and dreads was probably one of the first to be arrested and roughed up that night. According to him, the police wasted no time making a direct b-line to him..

We finally caught up with 23-year-old Jonathan Levy who was the protestor shown in the film..  Looking back to the events 18 months ago on the eve of the Oscar Grant verdict, Levy explained that he didn’t know too much about the particulars surrounding Grant until the day of the protests and his funeral. He said he felt compelled to go downtown and voice his concern and when he saw the line of police, he decided to approach them.

He explained that like most young men in Oakland his interactions with the police have not been positive. Oscar Grant’s murder struck a nerve. In engaging the police, Levy noted that he made it a point to stay within the lines of the law. In fact on several occasions he asked if his questions were illegal or if he was doing anything wrong. He never got a response.

Levy noted that his questions connected with a couple of the officers. He felt that all of them should’ve been out there protesting with the people and speaking out about the wrong doings of former BART officer Johannes Mehserle. Some of the other officer, were chomping at the bit as his questions got under their skin. As was mentioned earlier Jonathan was arrested, roughed up. His brother was beaten. He was charged with of failure to disperse and unlawful assembly. Charges were dropped the next day.

Levy explained that he had no regrets as to what he did. He was ready and willing to accept the consequences and in fact felt it would’ve been hypocritical to have runaway after asking those questions. He wanted to make a larger point about the importance of seeing justice for Oscar Grant and his family.  He also noted that he fully expects to be out there with the community on 14th and Broadway  6pm.. the night of the verdict.. He also said its important for folks not to riot out of respect for what the Grant family asked for.. ‘We still gotta live here’ , he noted..