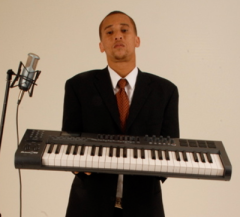 Shout out to one of the hardest working brothers in show biz… Its Oakland’s own Kev Choice.. Around these parts he’s a fixture as the classically trained pianist is highly sought after from by everyone from Boots of the Coup who he’s currently on tour with to Lauryn Hill.  The man does everything from write to compose to emcee and of course he does it with extreme funkiness. To put it succinctly  Kev is a musician’s musician.. The other day I got a nice video from him in France and decided to highlight him in the 3 Dope Song series..A little bit of background..

Back in 2009, Kev Choice launched the Daily Dosage music series to offer music lovers and fans a new song every 24 hours from Halloween until New Year’s Eve. Fast forward to 2012. During Kev’s European Fall Tour as keyboardist with The Coup, Kev launched the Daily Dosage: Euro Edition from Dijon, France. The second song recorded in this series — “Show The World” — was recorded in his hotel room in Dijon. The song carries the theme of showing the world what you have to offer, taking advantage of the moment, taking risk, and the challenges of seeking international fame. The song was produced by Kev Choice and features a sample from French composer and arranger Jean-Claude Petit.

About a year ago Kev Choice and long time SF based singer Martin Luther hooked up to do this heartfelt song called ‘Let It All Go’ The song pertains to dealing with everyday stress and struggles. Kev Choice plays a homeless person in the video, with the message being that no matter how bad things may be, it could always be worse. The video was shoot on location in downtown San Francisco by director Samm Styles and Brian Storm

Below is one my favorite songs from Kev..Its an inspiring song called ‘The Best‘.. It was originally featured as one of his Daily Dosage offerings. Hopefully it leaves you inspired as it did me..

Many folks have taken shots at Lauryn Hill for a variety of reasons.. It may be because she is notoriously late for her shows.. For me it’s always been a good 2 hours. For others it’s because at times she’s come across as disjointed and not always clear with her thoughts. When folks heard that she might be going to jail for not paying taxes, the jokes continued, with the aforementioned problems being cited as the likely cause for her dilemma… Lauryn Hill decided to set the record straight and she does so in fine fashion.. Here’s her open letter.. A lot of ground is covered here, especially around the issue of artist freedom and commerce.. 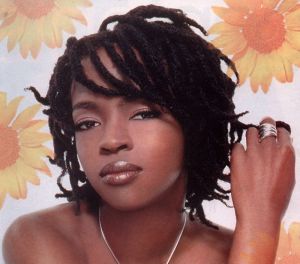 It has been reported that I signed a new record deal, and that I did this to pay taxes. Yes, I have recently entered into an agreement with Sony Worldwide Entertainment, to launch a new label, on which my new music will be released. And yes, I am working on new music.

I’ve remained silent, after an extensive healing process. This has been a 10+ year battle, for a long time played out behind closed doors, but now in front of the public eye. This is an old conflict between art and commerce… free minds, and minds that are perhaps overly tethered to structure. This is about inequity, and the resulting disenfranchisement caused by it. I’ve been fighting for existential and economic freedom, which means the freedom to create and live without someone threatening, controlling, and/or manipulating the art and the artist, by tying the purse strings.

It took years for me to get out of the ‘parasitic’ dynamic of my youth, and into a deal that better reflects my true contribution as an artist, and (purportedly) gives me the control necessary to create a paradigm suitable for my needs. I have been working towards this for a long time, not just because of my current legal situation, but because I am an artist, I love to create, and I need the proper platform to do so.

The nature of my new business venture, as well as the dollar amount reported, was inaccurate, only a portion of the overall deal. Keep in mind, my past recordings have sold over 50,000,000 units worldwide, earning the label a tremendous amount of money (a fraction of which actually came to me).

Only a completely complicated set of traps, manipulations, and inequitable business arrangements could put someone who has accomplished the things that I have, financially in need of anything. I am one artist who finds value in openly discussing the dynamics within this industry that force artists to compromise or distort themselves and what they do, rather than allowing them to make the music that people need. There are volumes that could (and will) be said.”

Ak’Sent aka  Krystle Kantrece Johnson is from LA..I remember when she first hit the scene around ’05, ’06, she looked like she was ready to be that main person everyone was checking for.. But then she disappeared.. Not sure what happened, but her music was dope and as an emcee she was up there..

Her father is of African-American descent, while her mother is of Mexican descent. Ak’Sent grew up quickly thanks to a rough childhood.Her father was an aspiring rapper caught up in the gang lifestyle and was killed in a gang shooting when she was four years old, and with her mother unable to support her on her own, she was sent to live with her grandparents in South Central, Los Angeles. Ak’Sent was signed to Capitol Records when she was only 16. Since then she has worked with a number of well-known professionals such as The Jugganauts, DJ Quik, & Beenie Man. Ak’Sent aims to avoid the glorification of violence and prefers to think of Hip-Hop as a form of “street poetry.” Her first album, International, was released on September 26, 2006. She released her second album Gem-In-I under the Avex label. It was released on July 16, 2008 in Japan only. She is currently recording her third album and a mixtape.

Although Ak’Sent signed to a major label when she was only 16 years old, her African-American/Latino background had her wondering where to fit in. Adding to her challenges, rap music wasn’t allowed in her grandparent’s house, but as Ak’Sent learned more about her father’s hip-hop aspirations, she decided she should carry on in his honor. She eventually spent time in several R&B-based girl groups and began dance training with Debbie Allen. One showcase at the age of 16 had the young multi-talent signed to Capitol and working with the production duo The Jugganauts. Ak’Sent was especially excited about the Caribbean-styled beats the Jugganauts were working on, and soon she was writing a series of dancehall numbers. One was the future hit “Zingy”, featuring guest star Beenie Man, who Ak’Sent herself had chosen because she was a huge fan. Her debut International landed in 2006 with a Spanish-language remix of “Zingy” and an ode to her departed father titled “My Life”.

source wikipedia.. for more info on Ak’sent go to http://www.aksent.com/