Lil Wayne: Whippin’ it like a Slave in Black August

“Young boys without substance or content.
You better slow your speed stop the nonsense.”
-The Power Chill Rob G- 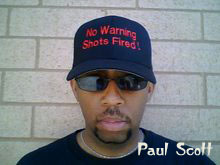 A flick came out in the mid 90’s called “Tales from the Hood,” it was kinda like a ghetto version of “Scared Straight;” only with zombies. Perhaps the best part of the movie dealt with a gangsta named Krazy K who was undergoing some heavy sci fi rehabilitation by being forced to relive scenes of the many murders of black folks that he had committed against a backdrop of lynchings and cross burnings. After listening to the latest youtube hit “Whip it “(Like a Slave), I wonder if such a rehab session would work on Lil Wayne? Naw, he’d probably just sit there with that spaced out permanent grin on his face sippin’ Sizzurp through a styrofoam cup and mumbling auto tune lyrics as visions of black death flash before his eyes.

This month is known as Black August, a time when activists recognize the August 21, 1971 state execution of revolutionary George Jackson via an alleged prison escape attempt. Not to mention it is a month rich in black history, including the births of Marcus Garvey and Fred Hampton. Unfortunately, it is also a month when Lil Wayne and the America’s Most Wanted Tour will be hitting cities across the country.

Unlike other rappers, Lil Wayne aka Weezy has never prided himself as being the “Malcolm X of the Hip Hop generation” and when he has his frequent run ins with the law he isn’t all over the TV yellin’ that he is “a black man being persecuted in America just for being black”  a la Dr. Henry “Skip” Gates.

He is what he is, a thug; a thug with a college education but never the less, a thug. So there is very little that would come out of his gold toothed grill that would surprise me.

However, his new collaboration with Dem Franchize Boyz got my attention on several different levels.

The song, which is the latest  Internet sensation, has been generating thousands of hits on social networking sites. While some will argue that Lil Wayne and the Boyz are not talking about literally tying someone to an old oak and pulling out a bullwhip but are metaphorically referring to cooking up crack, that makes the song even that much sicker as it embraces the genocide of black people, past and present.

While some may quickly point to the ignorance of the rappers to blame for “Whip it,”  the finger should really be pointed at the ignorance of a black community that would allow such a song without protest.

When I say ignorance, I am not talking about the negative connotation of lacking intelligence but the functional definition of lacking proper information in regards to the history of African people in this country.

The major problem when discussing the matter of slavery and race overall, in this country is a lack of a proper point of reference in order to put the discussion in the proper context.

For the last century, the issue of slavery has been glossed over by a Hollywood that was more than happy to give us the happy -go- lucky Uncle Remus type or the mammy who was happy to birth massa’s babies. Matter of fact, for most Americans, the image of slavery does not get any more graphic than “Kunta Kinte” getting 40 lashes for not accepting the slave name, “Toby.”

Also, the educational system of this country has relegated any discussion of black history to a 28 day period in February and the content of that discussion does not, in any way, seek to explore the depths of the brutality visited upon the victims of the Trans Atlantic Slave Trade confining it to a rosey picture painted of a post Emancipation America that merely substituted one form of slavery (chattel) for another (economic).

It must also be noted that while physical slavery was horrific it was the mental enslavement that has been the most destructive. For long after the physical chains are gone, the mental chains remain.

While many may say that this mentality is exclusive to the ‘ hood, it has historically been the black middle class that discouraged any identification with Africa, therefore pre-1865 history was a taboo subject for the upwardly mobile black bourgeoisie.

As Dr. Carter G. Woodson wrote in 1933, “the mis-educated Negro joins the opposition with the objection that the study of the Negro keeps alive questions which should be forgotten.”

So the severity of the slave trade was lost on future generations.

This is also exhibited among members of a Hip Hop generation who will constantly debate the lyrical prowess of rappers who celebrate the abuse of black women and glorify black fratricide but will shy away from any mention of the heinous crimes committed against black people by Europeans.

So we are left with an overly simplistic understanding of the thought process that allows songs like “Whip It” to be embraced in 2009.

This lack of historical depth is exacerbated by the fact that many perceive that we are living in a “post racial” America where the outrage over thousands of examples of police brutality against black men can can be squashed over beer and pretzels.

As Bruce Bridges writes in his book “Reclaiming the African Mind, “the intent of the system of slavery was to rob the African man of his responsibilities of manhood and emotionally castrate him.”

While rappers like Jay Z have dedicated themselves to DOA (the death of the auto tune) we must dedicate ourselves to DOI (the death of ignorance) by raising our voices against ‘Whip It Like a Slave.”

We must do this in honor of those whose lives we celebrate in August and whose deaths we mourn.

“When I revolt, slavery dies with me. I refuse to pass it down gain. The terms of my existence are founded on that.”