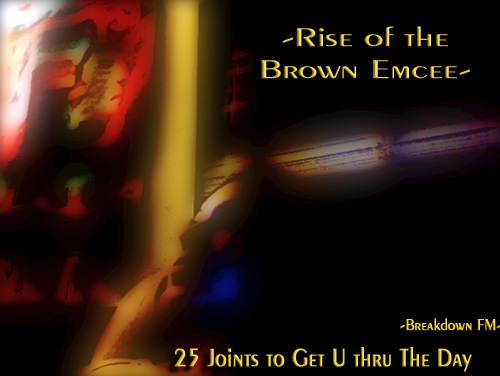 Listen to pt1 by clicking the link below:

A few months ago I sat on a panel at Harvard where we discussed the global impact of Hip Hop. There was lots of discussion about what folks are doing in Japan and Australia. We talked a bit about the major inroads made in places like Germany and France. Hip Hop on the continent of Africa was discussed. There was no denying just how widespread this culture born in the ravaged ghettos of the South Bronx had become.

During the discussion I noted that for us in the United States, while it was great to know about Hip Hop icons halfway across the world, in order to really appreciate the global reach of this culture perhaps we should start knowing about our Brown skinned neighbors next door and to the south of us in Mexico and throughout South America. I had always found it troubling that a professed Hip Hop head knew about artists in Canada but couldn’t name one from Mexico which has way more people.

I was always surprised that people knew about Snoop, Game and Dr Dre in Cali, but didn’t know about the equally large Hip Hop scene amongst Chicanos.

People know about Paul Wall, Chamillionaire and UGK in Texas, but many didn’t realize there has long been a Hip Hop exchange amongst Texans and heads in Monterey.

As Afrika Bambaataa likes to point out, those who hold up the mantlepiece of Hip Hop in corporate America have done us a disservice because they have segregated the music and in their quest to ‘do business’ they have distorted and omitted major parts that have been important to its build up. People like to say Hip Hop is worldwide in their radio station sales pitches but never reflect that variety and vibrancy on its day to day playlists.

When we talk about Hip Hop one of the key architects are those who see themselves as Latino. From day one our Brown brothers and sisters were on the ground floor plugging away and helping elevate the culture.-From grafitti to deejaying to dancing to emceeing Latinos have made an indeligible mark in Hip Hop that many have built upon. It may have been folks like Prince Whipper Whip of Fantastic Romantic 5 busting serious flows during Hip Hop’s pioneering days. It might have been DJ Charlie Chase or Disco Wiz holding it down on the turntables or pioneering figures like JoJo, Crazy Legs or Popmaster Fable wrecking shop on the dance floor.

On this special 2 part 25 Joints to Get U through the Day we decided to go digging in the crates and turn you on to some Hip Hop’s dopest emcees who just happen to come from the Brownside of town..

23-Deuce Eclipse ‘Can’t Break Me Down’

Rise of the Brown Emcee pt2 (the Indians Are Coming back)

We continue with our musical journey celebrating the Rise of today’s Brown emcees. We cover alot of ground especially with those who reflect Indegenous traditions in their music. Folks like Quese IMC, Omeca, 2Mex and Kiawiti hit the mark. We also celebrate those who have have crossed over into the mainstream but still kick flava like Omar Cruz, SPM and Malvadre to name a few.

Maria Isa is a fixture in the Minneapolis Hip Hop scene.The daughter of two Puerto Rican revolutionaries who used to get down with Young Lords and the freedom movements of the 60s and 70s, Maria brings a well-heeled politic and an infectious vibe when it comes to her music.

We talked to her about Minneapolis’s Hip Hop scene and the important role that groups like the Rhymesayers played in bring attention to a city that for years was only associated with R&B acts like Prince and Morris Day & the Time.

She talked about how steeped Minneapolis is in Hip Hop culture and how all four elements are prominently represented. She talked about Minneapolis being not only home to dope rhymers but also skilled b-boys and b-girls, graf writers and turntable masters. She described it as one big family and that at any given moment something good is jumping off in Minneapolis.

We talked about the important role that annual festivals like B-Girl B played in providing crucial platforms for the female Hip Hop community.She talked about some of Minneapolis’s other female stalwarts like film maker and fellow Puerto Rican Rachel Raimist.We talked about Rhymesayer/poet Desdemona and photographer B-Fresh.The list goes on.

We then turned our conversation to how Puerto Ricans fit in. We were curious as to whether or not PRs in the midwest played a major role in Hip Hop evolution the way they did in New York.We also found out why Maria calls her part of town Sota Rico.. Don’t get it twisted folks, Puerto Ricans have a strong presence in the midwest and they definitely get down.

We took our convo deeper as Maria explained the difference between Latin Hip Hop and Reggeaton. She noted that oftentimes people like to lump them all together, but in fact there are some unique things that one should take time to explore.

Maria broke down the important political situations facing Puerto Rico and how she tries to incorporate much of that knowledge in her music. She talked about the angst many feel because Puerto Rico is a commonwealth which is fancy word for colony. its sad that Puerto Ricans are considered US citizens yet cannot vote for the President except in primaries.

We also talked about the Latin/Brown diaspora and how the importance of bringing about Brown unity especially with issues like immigration. As a Puerto Rican Maria notes that she has the responsibility of giving voice to those who are here ‘illegally’ and can’t speak for themselves.

Maria’s album ‘Split Personality‘ is incredible and packed with cultural and political references and that pay homage to Hip Hop and her Puerto Rican heritage.