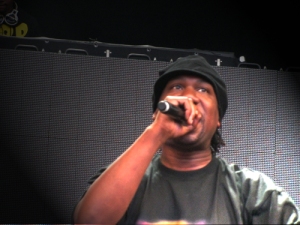 It’s always fun catching up with Hip Hop legend Blastmaster KRS-One. He always has something colorful and insightful to say when speaking. Some you may agree with, some you may disagree with. No matter what you have to appreciate his passion and confidence..

When we caught up with KRS during the Rock the Bells 2010 in Mountainview he was on his way to the stage to perform the album ‘Criminal Minded’. He did not disappoint. In 10 minutes we touched on a number of topics including his thoughts behind his new book ‘The Gospel of Hip Hop’. KRS noted that this was the Gospel for the new millenium. He says every generation has their Gospel and that he wanted to put forth his vision of Hip Hop and remind the world about its divine aspects. He believes the culture touches on the spirit in ways we simply cannot ignore.

I asked KRS with all the wisdom he’s garnered over the years, what aspects of Criminal Minded would he change? 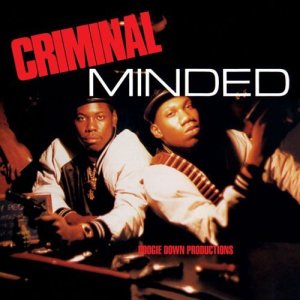 KRS said, he regrets how people mistook the meaning behind the album cover which shows him and the late Scott La Rock wearing an ammunition belt, holding pistols and having a grenade on the table. He said many thought he and Scott were the jump off for what would eventually be called ‘gangsta rap’ when in fact, they were attempting to put forth a ‘revolutionary’ pose.

KRS explained, that no gangsta would walk around wearing ammunition and holding grenades. He talked about how BDP was influenced by the Black Panthers and Black Liberation Army and wanted that album cover to be symbolic of the stances they took.

KRS also talked about how he regrets the harsh, sexist  words directed at Roxanne Shante. He noted that he was young and wild back in those days  and in hindsight  cringes at some of the things he uttered. He said its something all rappers will go through as they get older. How we express ourselves without full knowledge and understanding can be embarrassing once it’s obtained.

We concluded our interview by talking about President Obama. A couple of months after Obama’s inauguration , KRS came to Oakland and did a wicked freestyle where he talked about the biggest problem the president would have is the power and control of the Fed Bank. Over 100 thousand people viewed that video which sparked a lot of discussion. KRS caught al;ot of heat and was depicted as a hater. Nowadays his insight isn’t so easily dismissed or challenged

We talked about those earlier remarks and pressed KRS as to where he stands now. He stated that he respects the President, but make no mistake, Obama is a politician who runs a government.

He went to add, that we are now in a globalized world with a globalized economy and America has been resisting its entrance into it. KRS said, gone are the days when people could easily identify themselves as a race or religion. Things are changingas we are now in what people will deem a ‘New World Order’

Here’s the link to the full interview we did with KRS at Rock the Bells.. let us know what you think.. 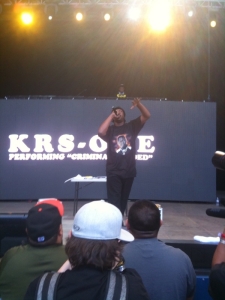 Peace and Blessings! We are now in the year 2010; marking the beginning of a new year and the birth of a new era of intelligence in this universal culture we have come to know as Hip Hop.  Hip Hop has been best defined by one of its greatest icons, KRS-One.  In the song Hip Hop Lives, KRS-One says:

It’s a form of intelligence

To be hip is to be up-date and relevant

Hop is a form of movement

You can’t just observe a hop

You got to hop up and do it

Hip and Hop is more than music

Hip is the knowledge

Hop is the movement

Hip and Hop is intelligent movement

We selling the music

So according to this lyrical definition, in order to live and express Hip Hop to its greatest potential we must stay in tune with the modern times and act in accordance with what is most needed in those times.  As the Hon. Min. Louis Farrakhan puts it, “Time dictates the agenda!”  I have encountered many “old school heads” that argue that we need to return to the spirit and expression of Hip Hop’s golden era (late 80s and early 90s).  Time and time again I have disagreed with this assessment.  While it is enriching and inspiring to study how the knowledge and wisdom that was pregnant in the music of that time inspired many of us to become the cultivated men and women that we are today, we must keep in mind that it may not be the medium of expression needed to have a significant impact on the hearts and minds of the people today; especially young people.  The music has changed and so too the culture has changed. 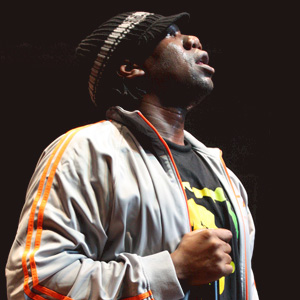 What we are countering today goes far beyond the senseless street violence of the 80s that prompted noted Hip Hop artists to produce the Stop The Violence Movement in the East Coast and We’re All In The Same Gang Movement in the West Coast.  In truth, we have just experienced a whole decade in which the minds of our people, especially the youth, have been corrupted like never before.  Corporate media on all levels has fostered an attraction and consequently an addiction to materialism, violence, sex and sexual abuse.  This is so much so, that our young Brothers and Sisters, many of whom are growing up in homes that offer very little love and guidance, are being raised to believe that it is totally acceptable, and therefore normal, for a man to inflict harm on another human being so that his own senses could be pleased.  Our young men mainly become victims to this in the streets and our young ladies mainly become victims to this domestically “between the sheets” … or literally by force in the back seat of cars.  The predominant image of a young man of color by way of subliminal media suggestion is one that is constantly in and out of jail, jobless and maintains very little responsibility for self or others.  Our young ladies are made to believe that if they do not look like Beyonce or some object that is “sexually arousing,” then they are not valuable in the eyes of anyone, including themselves.  In response, many of those of the older generations within the culture become disgusted by the new trends and in their bitterness do not take the time to drop seeds of wisdom to the youth.  Either this or in their attempts to stay relevant (A.K.A. “cool”) and therefore financially successful, the older folks pick up the negative trends that the younger generation has adopted, both in music and lifestyle.  When all of this happens, there is no true guidance.  Overall, what has been fostered for well over a decade across the board is a culture of death and disrespect and Hip Hop has been one of the main vehicles used in order to bring it into existence.

According to a recent national report compiled by Northeastern University criminologists, “54 percent of gun violence victims are black males between the ages of 14 and 17.”  According to the same report, “the number of homicides involving black youths — as victims and perpetrators — surged by more than 30 percent from 2002 to 2007, even as overall murder rates across the U.S. have been relatively stable.”  It is also noted in this same study that guns have increasingly became the weapon of choice since 2000 (by 40 percent).  While the homicide rate among Latino youth is statistically not as high as among Black youth, it is found that the homicide rate among poor urban Latinos is still well over three times higher than the white homicide rate.

We must pose the question, “Can we afford to lose another generation of young people of color?”  Emphatically, the answer is “No!”  However, in order to effect a change, a new breed of role modeling within Hip Hop needs to be birthed.  We can no longer compromise and simply settle with financially successful personalities who market and distribute music and fashion that promote violence, sexism and unintelligent mass consumerism to speak to young people as why they shouldn’t engage in these behaviors.  These methods have proven to be ineffective.

This is why a national call is being made right now by a network of activists and artists within the culture to consolidate our efforts nationally and to engage young people in the process of actively rebuilding our economically wasted cities; ultimately devoting ourselves to a day of service that we claim for ourselves in which we are in control of a responsible image of Hip Hop that we can claim for ourselves.

For anyone interested in joining these national efforts please visit www.miacampaign.wordpress.com.  We can also be reached at Musicofamovement@yahoo.com or call 754-246-0222.