Ever since President Obama came out and says he supports same-sex marriage it’s been interesting and somewhat amusing observing all the hoopla, uproar and call to arms by those who stand in opposition. It’s been interesting watching all the Biblical cherry picking of quotes and hypocritical behavior by many who have declared Obama’s stance as some sort of gauntlet in the sand and the start of sort of holy war on the institution of marriage..

In the interview linked below to our syndicated Hard Knock Radio show, I talk with Professor and ordained minister Michael Eric Dyson about many of the issues surrounding this debate..Dyson got himself in this firestorm last week, when he called those who were intolerant to same-sex marriage ‘sexual rednecks’. he questioned how is it that those who have been oppresses and still find themselves oppressed can turn around and oppress others?  You can peep our engaging discussion  HERE

As you peep the interview, here’s some food for thought…. 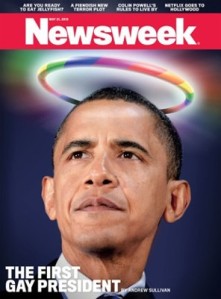 What’s been fascinating over the past week is seeing how folks have been jumping out the woodwork claiming same sex marriage is gonna damage the institution of marriage. With divorce rates skyrocketing as much as 75% in some communities and reality show after reality show offering marriage as some sort of game show prize to be discarded at the slightest whim, one might argue, war was declared a long time ago and it had very little to do with same-sex marriages. But let’s not digress.

The issue is not a real concern for marriage, because if it was we would’ve been marching in the streets long ago trying to set clear examples of how to stay married and keep the institution uplifted. We would’ve been celebrated and upholding those who have healthy and long marriages as models to emulate, instead we highlight and placate everything that is opposition to loving relationships. The upset isn’t about marriage being destroyed its about folks holding on to homophobia and intolerance and for many that’s a hard truth to swallow.

Many have tried to frame this discussion as if it’s the Black community against the LGBT community which they depict as white. What many have refused to acknowledge is that the gay community has a pretty sizeable number of Black folks and other people of color, many of who have and continue to either helping lead or right there on front line fighting to put an end to injustice. Folks wanna erase the contributions and leadership of James Baldwin, Bayard Rustin, Lorraine Hansberry, Langston Hughes,  Marsha P Johnson just to name a few. Folks wanna act like we don’t have current day leaders and activists who are also a part of the LGBT  community like Keith Boykin, Dr Adreanna Clay of SF State or Aids activist Phil Wilson.

What’s also been most amusing, is watching all those people who laughed and scoffed at conservative leaning voters back in 08 accusing them of being bitter and ‘clinging to shotguns or religion’. .We chided those voters for being ‘unenlightened’ and outdated in their thinking. We said their refusal to ‘open up’ has resulted in them being close minded, xenophobic, racist and intolerant..We told them it was high time they evolve and step into the 21st Century. Today we have many who were once mocked their conservative counter-parts, literally running to the closet and grabbing their own shotguns as they cling to religion as justification for expressing their own intolerance.

Many in this group wanna now conveniently fall back on ‘tradition’ and talk about the ways things have been for  3000 years and why we shouldn’t change.  Meanwhile these same folks seem to have no problem letting go of centuries old traditions cloaked in religious practices like slavery, women being deemed subservient or property and sacrificial rituals to name a few all of which have been pushed to the wayside because they been deemed ‘oppressive’, impractical or archaic.

Once upon a time in some cultures, marriage meant giving up some cows and property in the form of a dowry. There was a time marriage was arranged, you had no say so who your mate was. It wasn’t too long ago  within some religions you could take on more than one mate in your marriage. Still in other traditions you had to be virgin in order to be ‘properly’ married. It used to be you got married to procreate.. We could go on and on listing what it meant to be married and in each case folks and sometimes the church itself got together and redefined things. It didn’t matter if it was a centuries old tradition. You heard people say we had to evolve.

Today we go to down to City Hall which all of us straight, gay, Black, Brown white etc.. pay with our tax dollars and get a marriage license from the state. In other words we don’t have to go through any ‘religious ceremony’ or a church. I seen folks get married on beaches, in nightclubs  and at barbeques, all far cries from what many have deemed traditional.

Some of us have gone to weddings where folks are taking sacred vows and switching up the words.  How many times have we seen women scratch out the part where it says ‘You’ll obey your husband?  Tradition be damned. Religion be damned.. As I heard one bride say .. ‘this ain’t 200 AD it’s 1993 it’s equal partnership time.. I ain’t obeying no one but God’. People laughed and applauded as she went on to complete her wedding.

No one including the pastor got bent out of shape about her switching up those vows and changing tradition. No one tripped that she had been living with her husband for 5 years prior to getting married and no one tripped that she had multiple sex partners prior to meeting her husband. No one told her that God who she said she would obey, might’ve wanted her wanted follow those vows where she obeys her husband..And everyone held their tongue about her other ‘transgressions’ after all its a new day and age and those pesky religious rules get bent all the time when it suits our individual or collective purpose. They get bent all the time except when it comes to same-sex marriage..

Many of were told to not get upset w/ Obama for being silent on Troy Davis, he had to do what was political expedient

What has also stood out to me during this same-sex drama is all the glaring political MIS-POSTURING.. What do I mean by that? Well it wasn’t too long ago that folks who opposed President Obama on any number of issues like;  mass deportations, warrantless wiretaps, the resigning of the Patriot Act, his deafening silence on cases involving the police killing of Oscar Grant and the execution of Troy Davis, him giving money to build more prisons, his continued drone strikes in countries like Pakistan and Somalia where innocent families have been killed, his seeming indifference to the plight of poor folks as he constantly over-compromises or outright saddles up with multinational corporate interests, big Pharma, the telecoms, Goldman Sachs, and Monsanto to name a few, were rebuffed and often ridiculed by those now crying foul about this same-sex marriage endorsement..

If I go through my Facebook posts, twitter timelines or blog message boards, there were quite a few of these folks who would give lectures to anyone pushing the president to address issues specific to the Black or Brown community. The rationale usually broke down this way;  ‘President Obama is not the President for Black people, Brown people or one political persuasion ...President Obama is President for all people’  Folks opposing Obama were often chided and told; They ‘need to see the bigger picture and not focus on one or two issues’ and support the President’.

Many would staunchly point out that the President had enough opposition from the Tea Party and far right extremist forces and by behaving ‘emotionally‘ they were fueling the fire for his enemies..Folks opposing Obama on such important issues which adversely impact us day in and day out were essentially told to be quiet, because the President was ‘playing chess’ and executing shrewd political gamesmanship. We were told that Obama had to be politically wise in order to win over certain voters. Now that this same sex marriage endorsement is on the front burner, those folks who told us to pipe down are making all sorts of noise and following their own advise.

This past weekend there was big conference call put together by Rev Jamal H Bryant. he made a public call for Church leaders to get on the conference call to discuss Obama’s same-sex marriage endorsement..I would hope this wasn’t the only issue in recent days that he and other church leaders put out a nationwide conference call to undertake. I’m gonna assume that there were nationwide conference calls by these churches to address issues like skyrocketing poverty, massive incarceration rates, increased police and vigilante killings, war efforts in Africa, higher education becoming less and less affordable etc..Maybe I’m wrong to assume. I hope not.

Currently there are some who are so upset about the same-sex marriage endorsement to the point that they are calling on folks to sit out the 2012 election.. Now just a few months ago, many of these same folks were running around chastising anyone who objected to President Obama’s policies on war, poverty, government surveillance, deportations etc labeling them ‘Emo Progs’ (emotional progressives) aka Professional Left Y’all remember that term? What do we label those upset about ‘this one issue’ of same-sex marriage,  who are now threatening to ‘derail the 2012 election? Emo Churchers?  Professional Religious Zealots? The New ‘Ralph Naders?

I’ll tell you one lesson learned from this whole debate.. If you have issues of importance to you, you best speak up and push any and everyone who is in elected office to do right by you. There were many in the LGBT community who never piped down and even with this endorsement by Obama have not let up. They’re still pushing him as they should. There is no room for compromised citizenship. The goal is not an endorsement, but true equality and an end to state sanctioned discrimination.