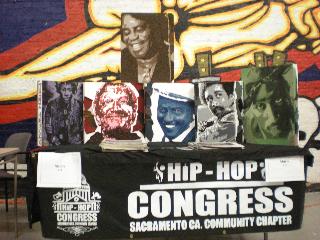 Watching the MC with the dreadlocks, the interracial couple, kids younger than 12, asians, blacks, whites and Hispanics congregated in the Washington Neighborhood Center all listening to the same music was a rare and inspiring sight.

Today was the third and final day of the first Sacramento Hip Hop Congress Awareness Festival. The day was dedicated to a showcase of performances by open-mic artists, b-boys, DJs and street, conscious and hip hop MCs from Sacramento, San Francisco and Los Angeles, as well as art displays.

Bay Area musician Rahman Jahmaal and local musicians such as Skurge riled the crowd with their inspirational words. Jahmaal broke down the beauty in the art of hip hop.

“I want to encourage you to be a little more active in your community,” Skurge said to the audience over the microphone.

The festival was heavily focused on bringing together the community and local artists with the different art forms of hip hop culture, in addition to introducing the local chapter of the Hip Hop Congress to Sacramento.

HHC co-chairs Vanessa Amarro and Aman Smith agreed that yesterday’s featured music industry panel, involving a discussion between seven speakers representative of the hip hop scene and participants, was a main highlight of the festival. Smith estimated that there were 30 to 40 people present, ranging from 8 years old to 45 years old.

“A lot of people were happy with the total outcome [of the panel] because it was such a diverse group of people,” Smith said. 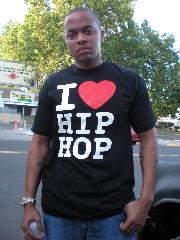 Smith expressed his excitement about the discussion that ensued about the future of independent artists and being successful in today’s market; he said the Sacramento chapter will continue the discussion once every month or every other month.

“There was a little bit of each genre, and with a graffiti artist and a lawyer on [the same] panel, you could see the unity,” she added.

In addition to the main stage, there was a separate room set up with microphones for kids to work on their music skills.

Twelve-year-old Sophia Marx, who just began volunteering for HHC over the weekend with the encouragement of her mom, said she really liked the sense of community at the event.

“I don’t get to do a lot of this stuff at home—work, sing and dance,” she said.

Rae, who said it was her second time performing in Sacramento, expressed her pleasure in being a part of the event.

“Hip hop Congress is always positive. It’s all for the love of hip hop,” she said.