So Jay-Z sparked controversy with his song Open Letter which was a response to the hoopla some in Congress was making about his trip to Cuba.. Well J Period hooked up a remix and added a scorching verse from Common.. I gotta note Common hits hard but may throw folks with his lyric about still riding for Obama..especially since he’s also talking about his support for Assaata Shakur.. In all fairness Common’s  been riding w/ the Pres from day one and hasn’t wavered.  So we’ll have to debate that another time.. In the meantime,  politics withstanding the song is a head bopper for real.. I hope other rappers come on and add their own take and expand the conversation about why we need to respect Cuba and drop the embargo

According to USA Today, Jay-Z is applying to become a baseball agent with Major League Baseball Players Association receiving his application to  be certified was received last week.

Jay-Z, who denied he was selling his shares of the Brooklyn Nets in the song Open Letter‘ obviously is to avoid any sort of potential problems and conflict with the MLBPA.

If Jay-Z gets certified, this may put a whole new twist on his trip to Cuba.. As folks may know Cuba’s amateur Baseball is deemed a powerhouse on the world stage.. Currently many in MLB have raided Latin American countries including the Dominican Republic looking for the next superstars.. Perhaps Jay-Z’s visit to Cuba was a way to get a head start on looking for great players in that country.. who knows? It’s not something to rule out..

On another note Senator Marco Rubio, a self subscribed Hip Hop head and Jay-Z fan responded to Jay-Z’s trip to Cuba saying he should get informed..Then he dropped a couple of misleading gems to cloud the issue.. He said on ABC News with Chief White House Correspondent Jonathan Karl

“The black is indolent and a dreamer; spending his meager wage on frivolity or drink; the European has a tradition of work and saving, which has pursued him as far as this corner of America and drives him to advance himself, even independently of his own individual aspirations.”

He also noted that Blacks didn’t bath too much..

Such remarks were written and espoused by Che who at the time had little contact with Black folks and brought into a lot of the myths an stereotypes.. He also changed over the years and his thinking evolved.. As was noted in an article by our good friends at Afro Punk who famously addressed this issue a couple of years ago,  Che not only evolved his thinking but also fought in All-African armies in Cuba  and in the Congo..where he went to fight after the death of leader Patrice Lumumba. He called for school integration before the US was down to address the issue.. Peep the article here..http://www.afropunk.com/profiles/blogs/che-guevara-a-racist-a-glimpse

“Those who kill their own children and discriminate daily against them because of the color of their skin; those who let the murderers of blacks remain free, protecting them, and furthermore punishing the black population because they demand their legitimate rights as free men—how can those who do this consider themselves guardians of freedom?

You can peep the entire speech here; http://www.marxists.org/archive/guevara/1964/12/11.htm 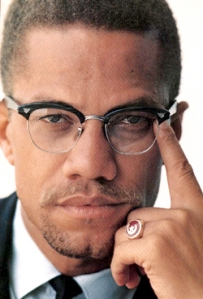 With respect to Jay-Z educating himself.. Rubio is right, Jay-Z should. He should educate himself about the harsh, hostile hatred shared by many of the rich wealthy 1% plantation owners towards Cuba’s Black population who aligned themselves with the Batista Regime who were overthrown by Castro. Many of those 1%ers fled from Cuba to Miami and for years held on to the same racial disdain for Black folks that Rubio accuses Che of holding. And I’m saying this as someone whose father lived in Miami, Liberty City since the 60s and was very active up until his passing two years ago.. We won’t even talk about the scapegoating and racial hostility directed at Haitians which is a whole chapter onto itself.. But I’m sure in 2013 Rubio would argue that things are different now and that people’s attitudes have changed.. Well we do know that Che had evolved the same as Malcolm X who expressed admiration for Che and even invited him to speak at the Audubon Ballroom to speak at a meeting for OAAU [Organization of Afro-American Unity.. You can read about that HERE

During the interview with ABC News, Rubio  “Secondly, I think if Jay-Z was truly interested in the true state of affairs in Cuba, he would have met people that are being oppressed, including a hip-hop artist in Cuba who is right now being oppressed and persecuted and is undergoing a hunger strike because of his political lyrics.”

This is an interesting assertion on  a number of levels. First the Cuban rap artists who is on hunger strike has become a cause celebre His name is Angel Yunier Remon Arzuaga better known as Critico de Arte. Most people up until Jay-Z’s trip to Cuba never heard of this artist and would be hard pressed to name a song or the political party Patriotic Union of Cuba (UNPACU) he is affiliated with..He’s a tool of convenience..He’s a talking point for those trying to win a political argument. Sadly his plight and the plight of many like him are of very little concern to Rubio and people who think like him..

I find it fascinating that Rubio would talk about this young man’s hunger strike but as a United States Senator has ignored the massive hunger strikes here in US prisons..Last year there was a big one in several Georgia State prisons.. Rubio was absent from that.. You can read about that one here http://blackagendareport.com/georgia-jackson-state-prisoners-hunger-strike-day15

There were prison hunger strikes in California most notably Pelican Bay the year before which Rubio was silent about .. You can read that Here: http://solitarywatch.com/2012/07/03/one-year-anniversary-of-pelican-bay-hunger-strike-against-solitary-confinement/

What’s most disturbing about this prison strike in California since we are talking about the state clamping down on dissident voices in Cuba is whats went on here in the US with the media Blackouts of the prison strikes  http://www.democracynow.org/2011/7/21/headlines/media_ban_imposed_as_california_prison_hunger_strike_enters_4th_week

As we speak there are hunger strikes going on at our own Guantanamo Bay. In addition to torturing people who are held as enemy combatants, meaning they haven’t even gone on trial yet, we have guards shooting at those hunger strikers .. Again this is going on right now.. in April of 2013. http://www.democracynow.org/2013/4/15/headlines/military_guards_fire_on_gitmo_hunger_strikers

The hunger strike which involves more than 100 prisoners has been going on since March http://www.democracynow.org/2013/3/13/over_100_guantanamo_prisoners_on_hunger

With respect to political beliefs we can talk for hours about our own political prisoners, many of them former Black Panthers.. some have been locked away in solitary confinement for over 40 years..  http://www.democracynow.org/2013/2/28/after_40_years_in_solitary_in

We would be here for days if we talk about the countries our government led by Senators like Marco Rubio are in alignment with and have strong ties who routinely prison dissident voices.. Try speaking out against the government in China or Saudi Arabia or even Egypt where they actually have a censorship czar. No one’s speech should be silenced, even the rapper in Cuba..But if our foreign policy is going to be galvanized by that while we ignore more egregious behaviors in our own backyard, we are beyond hypocritical.

Lastly for those who don’t know there has been serious cultural exchange going on between the Hip Hop community here in the US and the annual Hip Hop Festival they have in Cuba.. It’s been going on since 1995. Quite a few artists have been there numerous times and the bond between artists from here and Cuba has been strong.. It was just recently Las Krudus came by our show and spoke at length about the arts, racism and politics both at home in Cuba and here. It’s by no means all peaches and cream..

Jay-Z got inspired the other night responded with vigor to his critics about his trip to Cuba…The song is called ‘Open Letter’ and the beat is slamming and is no doubt a serious head nodder.. You know its gonna anger all sorts of folks who are already heated, because he says in the song he loves Cubans.. His critics are saying by going to Cuba, he is showing hatred.. He starts off the song by saying he’ll turn Havana into Atlanta..Not sure if folks in Havana wanna see gentrification in their beloved city..because thats what has happened with the ATL.. No Beds, Baths and Beyond in Havana..

Jigga also talks about Obama and whether or not he’ll be selling his portion of the Brooklyn Nets..The hook to the song says’ ‘You Gonna Learn to Today‘. Ideally what we all learn is that Cuba has a dope education system which produces doctors who make major moves in healing people.. We could learn from that..We could also learn how to be self sufficient the way Cuban’s have been.. Folks are still surviving in spite of the crippling embargo we’ve put on them over the past 50 years..

Great song.. Glad Jay-Z responded.. Personally I wish he had shouted out or kicked a rhyme for Kimani Gray the young man gunned down by police in Brooklyn which set off 4 days of unrest in the East Flatbush last month.. I wish he would’ve said something about the unrest and the fact Stop-N-Frisk is on trial with cops revealing they been ordered to meet quotas and target young Black men and teens.. In any case that’s, just me expressing my ideal scenario.. Open Letter is a good song and maybe Jay-Z will return with more heat..