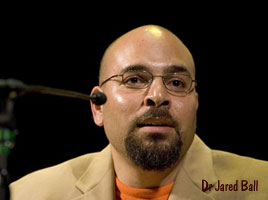 Longtime journalist, professor  and former Presidential candidate Dr Jared Ball is always on point when he tackles the topic of Hip Hop As Mass Media..

In the clip below he kicks off what looks to be an very engaging conversation.. Head on over to his website http://www.voxunion.com/?p=2645 for more info..

We gathered this week to discuss Hip-Hop as Mass Media.  The conversation took place May 10,2010 at the Social Action and Leadership School for Activists in Washington, DC.  The discussion was wide-ranging but based upon a premise that hip-hop is a cultural expression of a colonized population and, therefore, is impacted by some very old processes which prevent its popular form from becoming anything but what most often lament.  But if the U.S. is indeed an empire than its relationship to any nation; those abroad, those maintained within and even the one often referred to as a “hip-hop nation,” is that of “Mother Country” to her colonies.