It seems like the arrogance simply doesn’t stop. First it was 23 billion dollar bonuses and now its the H1N1 vaccine for the  scummy people over at Goldman Sachs’. While many ‘at risk’ people have stood in long lines or anxiously parked on waiting lists to get the vaccine, the billion dollar boys used their money and connections to get their flu shots. It didn’t matter if folks were or were not ask risk, GS along with several other banks went and ordered the medicine directly from the manufacturer.

At the same time this is happening millions of credit card holders all over the country have received letters in the past couple of weeks from these rich bankers informing us that interest rates for the cards are gonna jump up big time. Some folks are looking at interest rates of 24-25%… So shiesty was this move from some of these banks that Congress is pushing to enact the new credit card consumer protection law which was scheduled to go into effect in 2010, they want to put it in place right now. The banks are furious and are pulling out all the stops to lobby congress. We’ll see how sympathetic they are or how easily they can be brought off in the wake of this latest rich people get Swine Flu vaccine scandal. 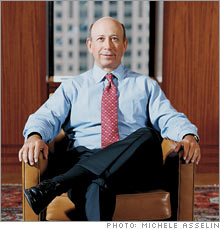 Gokdman Sach's CEO LLOyd Blankfein made sure his ilk got the H1N1 vaccine before those at risk.

We’ve been trying to figure out what, if any, preparations Wall Street has been taking to guard against H1N1.

For the most part, the banks have been coy about their activities.

But as noted on The Today Show this morning, several banks have been among the early recipients of H1N1 vaccine, allowing them to get ahead of hospitals in some instances.

The story was originally broken by BusinessWeek this week.

Health officials say corporate partners are always part of the distribution of any vaccine.

There’s no allegation that they broke any rules, and we’re still not quite sure what the whole story is — mainly it looks like another PR snafu for Wall Street. Some are suggesting that, perhaps, the banks should have donated their allocated vaccines.

In defense of the banks, we all benefit when others are vaccinated. It’s a positive, not zero-sum game.