Just came across an interesting article on Alternet this morning called America’s White Male Problem.  It’s written by Frank Schaeffer an author and former right-wing Evangelical who talks about one of the underlying reasons behind some of the nihilistic directions this country seems to be taking has to do with deep-seated fears and pathology and not politics.. Here’s an excerpt of what he wrote…

The American political process is being hijacked by a reckless, whining dangerous gang of psychologically damaged white men who are far-right ideologues. I used to be one of them. It’s time to tell the truth about our white male problem.

Not everyone who disagrees with the president is a racist. Not even most people who do are. But the continuous attempt by the white far-right in Congress to shut down the government rather than work with our black president has a lot to do with racism. And lurching from manufactured crisis to crisis isn’t about politics; it’s about pathology. It doesn’t make sense politically to take the blame for risking America’s future — and the Republicans know they will take the blame — so how can we conclude other than something else is going on here?

I’m not talking about the white young male mass murderers we’re afflicted with carrying assault rifles courtesy of the NRA. I’m talking about the white far-right males who hijacked the 112th Congress and are set to destroy the 113th. They have metaphorically done to our country what the killer in Newtown literally did to 20 children, and for the same apparent reason: alienation from the mainstream and retreat to a paranoid delusional fantasy land of — literal — mental impairment.

This has less to do with politics and more to do with the fear and mental illness that grips a willfully ignorant minority of white males. But the mainstream media is talking about everything but the underlying racial, cultural and mental health issues afflicting the white male minority of far-right congressmen holding us all hostage. And the extreme insanity of the right-wing rhetoric over the last four years, from “birther” to Obama-is-a-Muslim etc., conclusively points to something other than politics.

The manufactured crisis we face are not about economics. These self-inflicted wounds are about a few people’s fear of being marginalized.

It’s not considered polite to mention race anymore. But I’m going to mention it anyway. We have a white problem.

You can continue reading the article  at http://www.alternet.org/americas-white-male-problem

As you read this article I want people to pay attention to what Schaeffer is talking about when he talks about the psychological problems that are at play with some who are pushing extreme measures… Fear of Black/ Brown Planet... This is what Dr Frances Cress Welsing talked about years ago… Here’s a couple of videos…The first video talks about the massive lies that have been laid upon People of color…Pay close attention to the second and third videos where Welsing debates William Schockley a leading scholar from Stanford University who believed that Black people were genetically inferior.

Plies: Why They Really Hate You
The Education of Algernod Washington
by Paul Scott

Like many of the commercially successful rappers coming out of the South, a release from Plies usually guarantees heavy radio and video play. However, I doubt that his latest release is going to be welcomed with open arms by the powers that be.

Last week, Plies, born Algernod Wahington, released one of the most thought provoking videos to come out of the “Dirty South” since the days of Outkast and the Goodie MOB called “Why U Hate ?” The song and video, which features the artist rapping with a noose around his neck , poses the question, “what is white America’s beef with black folks?

Although the self proclaimed “goon’s” sexually explicit songs such as “Becky” and “Bust it Baby” have received heavy airplay, one has to wonder what reaction “Why U Hate ” will get from Hip Hop radio stations and video programs like BET’s 106 and Park . The concern being, it might inspire Plies’s fellow goons to begin to conduct in-depth analyses of America’s race problem. In other words, it might make people think. 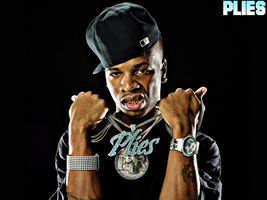 Will radio play Plie’s socially conscious song ‘Why U Hate?’

The question that Plies has posed is complex and can be answered on many different levels. However, to get to the root of white hate you must go back thousands of years. According to Canadian writer Michael Bradley, in his book “The Ice Man Inheritance: Prehistoric Sources of Western Man’s Aggression, the problem stems from the hyper-aggressive nature that the European developed as a survival technique for coping with a frigid climate. This led to their need to conquer the whole planet.

Also during the Transatlantic slave trade the Europeans used the myth of racial inferiority to justify slavery. After the Civil War, according to WEB DuBois in his book, “Black Reconstruction,” Northern industrialists and members of the Southern aristocracy (the planters) manipulated poor whites into hating the newly freed “slaves” in order to exploit them.

It must be noted that much of the hatin’ on black people is based on fear. Dr. Frances Cress Welsing author of “The Isis Papers” has suggested that Caucasians have a fear of genetic annihilation; believing that eventually ,through the amalgamation of the races, the white race will cease to exist.

Also there is the fear of “the big pay back” where African Americans will seek revenge on whites for the atrocities committed against them. Over 200 years ago, as Bradford Chambers writes in “Chronicles of Black Protest,” Thomas Jefferson predicted that the “deep rooted prejudices of whites” and the “10 thousand recollections by the blacks of the injuries they have sustained” would produce a division that “would probably never end but in the extermination of one or the other race.”

Also, black psychiatrists William Grier and Price Cobbs wrote in their 1968 book “Black Rage,” “long after slavery, many whites are haunted by a vision of being oppressed, exposed to the whims of a powerful cruel black man.”

It must also be noted that this fear also influenced public policy, as during the Civil Rights/Black Power Era, FBI director, J. Edgar Hoover, set up COINTELPRO (Counter Intelligence Program) to prevent the rise of a “black messiah” that could electrify the youth. Which leads us to why “they” hate political Hip Hop, since it has the potential to convert rap fans into revolutionaries.

However, white America does not really hate “gangsta” rappers like Plies; she created them. What they fear most is Algernod Washington, the business man who is rumored to have been valedictorian of his high school class and a former college student; the proverbial “fear of an educated black man.” The Plies’s of the world are just thugged -out versions of Frankenstein’s monster who have been programmed to never turn on their masters.

That is until one of them is deprogrammed and starts making songs like “Why U Hate ?”

For most folks, Plies is an unlikely candidate to spark the Hip Hop revolution. However, the same might have been said about Detroit Red before he became Malcolm X or Eldridge Clever before he wrote “Soul on Ice” We must also remember that many black leaders from Abubadika Sonny Carson to Bunchy Carter and John Higgins were former gang members. Even one of the fathers of Hip Hop, Afrika Bambaataa was a gangsta at one point.

As Jabari Natur, chairman of Solvivaz Nation said “The spirit of Black Liberation is in all of us. ” This is a chance for something to blossom in the millions of people who will watch the video.”

What Hip Hop needs is a movement to raise what the late chairman of the Illinois Chapter of the Black Panther Party, Fred Hampton, would call “antagonistic contradictions.” We must aggressively question radio stations who will play Rick Ross‘s “BMF” every five minutes but refuse to play “Why U Hate.” Since many DJ’s claim to play negative Hip Hop because “that’s what people are requesting” we should immediately start calling and tweeting radio stations, asking them why they aren’t playing Plies’s song. That way we can monitor the tweets and expose Hip Hop radio’s hypocrisy.

Perhaps this is a one shot deal for Plies and next week he’ll go back to being “the thug you love to hate. Time will tell.

But as Kwame Ture once said, “Every “negro” is a potential Black Man.”

I guess that goes for goons too…