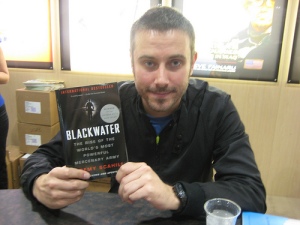 The first time I heard of Blackwater was around the Katrina disaster in New Orleans. We started hearing reports that there was a private army that was running around, guarding hotels and preventing people from taking refuge and seeking shelter as they fled from the horrors of the 9th Ward.

At first we thought they were security guards, but later learned they were navy seals, and ex military men who had come in from Iraq and were given full authority to shoot and kill, detain folks and basically run the show. The word was these guys were scary and out of control.

Those early reports were later confirmed by journalist Jeremy Scahill who went down to New Orleans and pretty much let us know that just like Saddam Hussein had his special Revolutionary Guard, George Bush and friends had their own army of sorts in the form of Blackwater..

Headed up by former elite Navy Seal and fundamentalist Christian, Erik Prince, Blackwater epitomized the growing trend to outsource all aspects of our military operations to private companies who with their entrance into New Orleans have also started doing domestic work. For example, the city of Oakland was talking about having Blackwater patrol their streets.

We caught up with Jeremy and had an in depth conversation about Blackwater and Scahill’s new book. ‘Blackwater: The Rise of the World’s Most Powerful Mercenary Army’.

Here Jeremy gives the full history of this organization and details how many of our best trained military personnel are now employed by Blackwater. We talk about the use of private armies around the world and how they have been used for years to destabilize governments in Africa including Apartheid South Africa.  Scahill talks about the sadness of having white mercenaries running around the continent killing Black leaders and tipping their government on behalf of rich and powerful business interests. 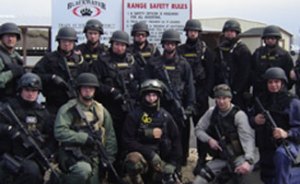 This is the worlds biggest private army

We talked in depth about how Blackwater had started their own CIA.. Yes, you read that correctly, this private company has its own CIA headed up by former high ranking CIA members. We talked about how and why members were not in violation of the law since they were sharing state secretwith private individuals. In short we train Blackwater members with our tax dollars. They then go off and work for a private company who may at times hold a different agenda then that of the people.

Scahill soberly noted that this private CIA is one of the most under reported stories today and he took his fellow journalist to task for not speaking up on this and letting the world know. Scahill also detailed how Blackwater is part of a secret Assassination Squad that he accuses former Vice President Dick Cheney of putting together and shielding from Congress.

We spoke with Scahill about President Obama and where he stood on this issue.. He noted that Obama as a Senator was one of a handful of people who stood up and demanded that Blackwater be held accountable. He even backed that up with legislation that didn’t pass.  As President Obama uses Blackwater in Afghanistan  but won’t extend their contract in Iraq where they guard government officials. 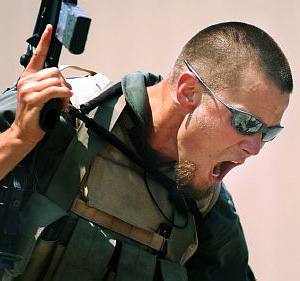 We talked about whether Obama or any other country would have to concern themselves with a possible Coup. The question was asked with the understanding and concern that for years there have been racist paramilitary groups training all over the US and joining the military and police forces. I wanted to know if those types of people holding supremacists attitudes were working for Blackwater.. Scahill noted that Blackwater is fully capable of defeating small nations but didn’t think they would run a coup on this country. Our military is not too keen on the whole Blackwater thing. Scahill said that many in our military feels that Blackwater’s unchecked actions cause problems on the battlefield. He did however say he feared for Obama’s safety and said one should not underestimate the extent that white supremacist attitudes run deep and what sort of crazy reactions it inspires.

During our interview we noted how the popular Fox TV show 24 featuring Keifer Sutherland last season had as its theme a Blackwater type army undermining the government. Scahill noted he had heard this and was presently watching the series. He noted that the show had unfortunately helped undermine the argument that torture is wrong. Many have watched Sutherland’s character Jack Buer routinely torture people in his quest to save the world. Many have come to fusethe fact with fiction.

We ended our interview with a discussion on the role media has played or not played in all this. Scahillconcluded that way too many have become too friendly with the rich and powerful and instead of vigorously covering them, reporters are drinking beers and playing golf. Scahill said we no longer have journalists, we have media personalities.

Listen to the Breakdown FM podcast by clicking the links below…