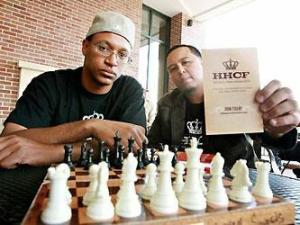 Celebrity guests inculde Rakaa Iriscience from Dilated Peoples, rap
legend Ray Luv, Traxamillion, Casual from Hieroglyphics, Balance and
Big Rich, Conscious Daughters, T-KASH, DLabrie and others to be
announced. The event will be DJ’ed by KMEL Street Soldiers DJ Malcolm
Marshall. There will also be a special All Queens Life Strategies
Panel where Birth of the Chess Queen author Marilyn Yalom, Conscious
Daughters, rapper Melina Jones and Jean Hoffman of 9 Queens will
discuss how young girls can step forward with positivity and
confidence into the future.

“It was time for the HHCF to do something specifically to celebrate
the power and impact of the artists from the west coast,” said HHCF
founder and CEO Adisa Banjoko. “We always provide safe, family
friendly environments for people to discover their true potential in
life and have fun. So many young girls out there love the game of
chess. We wanted to set something up just to celebrate the queens. We
wanted to give these girls direct access to women of knowledge and
strength, in hopes that these young ladies will follow their lead.”

“We are enthusiastic and grateful to all the celebrities, kids and
educators coming together for the Kings & Queens Tournament,” said
Banjoko. “This organization has been hurt badly by the failing
economy. Yet by forging strong strategic alliances we’re still pushing
ahead. These are tough times for many of America’s youth. Nevertheless
the HHCF remains unflinching in our goal to share the countless
educational and artistic life options for them in this world. We are
grateful for all the rappers, chess masters and martial artists who
have donated their time to teaching kids healthy alternatives to
violence on the streets. Since our explosive beginning there have been
many imitations, but there is only one Hip-Hop Chess Federation! See
you all there.”

All who wish to compete in the Kings & Queens Tournament can sign up
today at:http://www.bayareachess.com 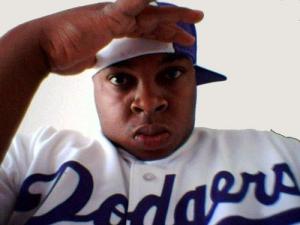 Depending on where you sit within the diverse spectrum of Hip Hop music and culture, Mykill Miers is either someone you never heard of or a long time fixture in LA’s burgeoning underground scene who gave us classic albums like ‘It’s Been A Longtime Coming’. However, no matter where you sit, you most likely have heard his work.

When this longtime vet is not snatching off heads at rap battles or keeping young gang bangers in check at Juvenile Hall, he’s busy producing music for a long list of TV shows and commercials. Being Bobby Brown, America’s Top Model, America’s Top Chef,VH1, Old Navy, Sprite, Diet Pepsi and this upcoming season of The Apprentice are just a few of the many places where Miers has left his musical mark.

“It’s extremely important that, I as a Hip Hop artist have multiple streams of income”, he explained. He went on to emphasize the importance of artists remaining independent and owning their masters.

He noted that he’s able to license his material and do business all around the world and not have some major label taking a substantial cut while not seriously breaking him off or pushing him to the next level. “It’s all about the hustle”, he concluded.

He also added that its important for independent artists to ban together, share resources and create avenues that they control that will lead to increased exposure. 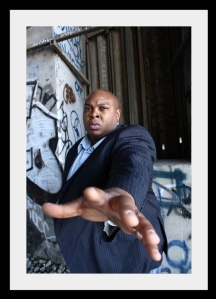 In our interview Miers offered up a lot of insight and oftentimes overlooked history about LA’s Underground scene. He spoke about central figures like the late Bigga B. He talked about how he came up and earned his stripes at the Good Life Café in South Central LA. This is the spot that gave birth to groups like Freestyle Fellowship and Jurassic 5. Miers likened those early days in the late 80s early 90s to the Apollo. He noted that cats were unforgiving if you came on the mic and did not bring the heat.

Battles were par for the course and Miers is more than tested. He’s one who is set to grab the mic and take a cat down anyplace, anywhere and at anytime. This was clear during our interview when we asked him to lay out the type of approach he would use if he had to battle fellow emcees and friends, Xzibit, Rakaa of Dilated Peoples, Snoop, Game and Jurassic 5.

Miers also spoke to us about the direction Hip Hop has taken with major corporations running the ship. He had some choice words for a number of rappers who he feels have sold their souls to be promoted by the corporate machine. He says he’s sees the type of negative impact much of today’s music has on the kids he works with everyday at Juvenile Hall. “They see artists like 50 Cent as a hero or even a brother. Everything these artists do these kids who are locked up wanna do”, Miers explained. He stressed the importance of providing balance and guidance.

He noted that him being an emcee has helped him to be relatable to the kids he works with. It allows him to have positive influence over more than a few. He also talked about how he avoided the lure of gangs in both his personal life and his music, while his brother engaged in it hardcore. He noted that being an athlete saved his life and that he wanted to commit himself to changing lives.

Miers is gearing up to release his new album ‘Trials of Job’ and is also working on doing a big concert inside Juve Hall which will hopefully include everyone from Xzibit on down to Jurassic 5.