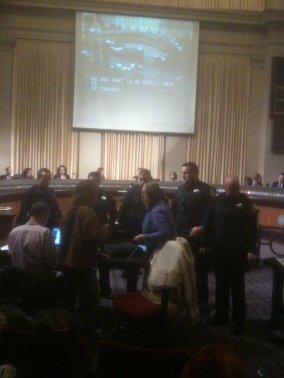 Oakland—After a marathon meeting that saw an attendance of more than 500 Oakland residents and nearly 4 hours of public testimony, the Oakland City Council voted in the early hours of Wednesday morning to move forward with spending $250,000 on a contract to hire controversial police consultant William Bratton.  Bratton’s notorious policing methods—including stop and frisk, gang injunctions, and curfews—remained center stage, as countless residents called for an end to harmful, divisive policing policies in Oakland.  Despite several Council members turning out pro-Bratton elements of their districts and a strong police presence in the chambers that heightened tension among participants, many residents stuck the meeting out to the bitter end, calling for public safety strategies that were more inclusive of community input and participation. Toward that end, Oaklanders recommended broader and better after school and restorative justice programs, job training, and services for residents returning from prison and jail.

Noting how the Council seemed to be playing into people’s fear, Councilperson Desley Brooks took a strong stand against the contract asking questions about what had been delivered on the existing contract and suggesting that the Council had been sloppy in considering the proposal to amend it. “Rejecting this contract tonight,” Brooks stated, “isn’t about not addressing crime.  It’s about doing the hard work that needs to be done.”  Brooks offered the lone voice of dissent on the Council.

“Sure it’s frustrating that the Council is moving ahead with the contract and Bratton despite all common sense, but many residents seem more ready than ever to band together and fight for a smarter, more sustainable way of dealing with harm in Oakland,” said Rachel Herzing of the Stop the Injunctions Coalition.  “Our work will continue to fight Bratton-style zero tolerance policing however and whenever it comes to our neighborhoods—to carve out wider and wider spaces for the real innovation and creativity in implementing strategies that are viable, that take into account the knowledge and experience of the community itself, and that are effective in making our city healthy and strong.”

That above piece came courtesy of  Stop the Injunctions Coalition

Here is our interview w/ Isaac Ontiveros of Stop the Gang Injunction Coalition..

I attended this marathon meeting and wrote an open letter to Oakland City Council and the Mayor Jean Quan…You can chime in by hitting this link..http://on.fb.me/VZGSAk

Stop and Frisk in NYC

After 5 hrs of testimony and over 500 people from all over speaking out against Chief Bratton and his infamous Stop and Frisk policies, y’all decided in a 7-1 vote to go ahead and vote for him anyway last night..During the discussion we heard some of you note that you wanted strategies from Bratton to make Oakland policing more efficient but not have racial profiling and Stop and Frisk.. Well if Bratton coming to consult Oakland is not going to lead to racial profiling and Stop and Frisk, will you all put that in writing and make that crystal clear?  How about putting in his contract Stop and Frisk and similar profiling tactics like the nicknamed ‘Jump Out Boys‘, ‘Open Halls‘ , ‘Run Up and Freeze‘ etc WILL NOT be used by police in Oakland?The point was made at the meeting that in order for crime to come down in Oakland, trust between the community and police is needed. How is the community supposed to trust OPD if they have a consultant who may recommend intrusive policies like Stop and Frisk?

Last night speaker after speaker expressed concern about this.. Why not ease those fears? This is especially important now that the judge who prohibited Stop and Frisk in NY has just reversed her position on many of the tactics used in this procedure..You can read about that here—–> http://nydn.us/WV8cws

In NYC which many like to point to, you still have large scale protests against NYPD..around this issue including last springs march of silence that brought out close to 40k people… You even have police officers in NY objecting to stop and frisk because of the pressure to meet quotas.. You can see that here—-> http://www.youtube.com/watch?v=6KeuRilK51c

Again why not put this in writing and take Stop and Frisk off the table if its not about that in your 7-1 decision to bring in Bratton?

We await your response Thank u
Davey D

There was a memorial for Oscar Grant, a 22 year old father who was murdered by BART police a year ago while he laid face down, unarmed on a subway platform with his hands behind his back. Many people from the community came out and spoke including his mother Reverand  Wanda Johnson and city council Desley Brooks who got into the ass of the BART officials who did show up…Here’s some of rthe sights and sounds from that day

Oakland City Council member Desley Brooks is not one to ever hold her tongue especially in the face of injustice. Here she smashes on the people who run BART for trying to give flowers to the family of Oscar Grant when they opposed every step the community took to seek justice for his murder by former BART police officer Johannes Mesherly

More sights and sounds from this past weekends Oscar Grant Memorial at Fruitvale BART. here Oscar’s Uncle Bobby speaks along with Jack Bryson who is the father of the two boys sat on the platform w/ Oscar that night. Oscar’s daughter Tatiyana was presented to the crowd. Also throwing down was Minister Keith Muhammad who let everyone know what time it is…