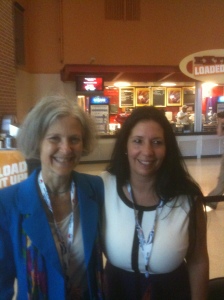 During our Pacifica Radio coverage of the (DNC) Democratic National Convention in Charlotte, NC, we got a chance to talk w/ Jill Stein and Cheri Honkala of the Green Party. What they had to say was insightful and pretty much on the mark as we covered a wide range of issues including poverty and the lack of discussion around it during the DNC..

In terms of what it means for them to run, when they are virtually ignored by the mainstream press speaks volumes. It shows just how controlled and embedded the press which was once deemed the 4th Estate is when  it comes to elections.  When we did this interview we were right next to dozens of the top radio shows in the country. They were known to everyone, but ignored. The international press did interview them. It was bizarre to see the blatant omission..

Anyway hear what these two women have to say and decide for yourself what direction you wanna take come this November. co-hosting w/ me on this interview is Margret Prescod of from our sister station KPFK in LA 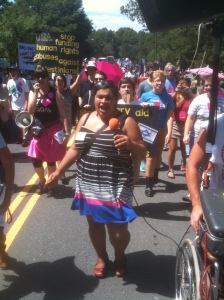 Live From the DNC-Charlotte Day 1: Today is the first day of the Democratic Nat’l Convention and already in there have been more and bigger protests in the past 3 days then all of what we saw in Tampa.. The big one was the Historic Wall Street South March which saw large number of Labor People come together to not only highlight economic disparities. 99% vs 1% but to also bring heat to President Obama and the DNC for holding a convention in North Carolina which ranks #50 in Union members..

In fact up until a couple of weeks ago some of those business interests supporting Obama had boldly advertised on their website.. ‘Welcome to Charlotte Where We Don’t Have Unions’.. It was a huge smack to labor who pulled back significantly in both money and support… They noted that they had very little input from day one on any decision making..The corporate bigwigs have their own trade associations and and belong to outlets like the US Chamber of Commerce who represent their collective interests, but those same forces are adamantly against the average worker organizing unions.   On the flipside of the coin, the DNC says they came to Charlotte to make sure that North Carolina, which had long been a red state would remain blue.. Obama made that happen in 08.. Currently Mitt Romney is leading in most polls in North Carolina..

Sadly for many union members they feel they have no choice.. So while many went in hard on Obama at the march, they tempered their remarks to say they will support him. Over the past few months I’ve been used to going to places where I would hear folks critical of the President..especially when it comes to him pushing an agenda that looks out for Black folks.. That definitely is not the case hear.. Black folks in Charlotte are riding uber hard for Obama. Over and over I heard from folks saying that was their guy hands down.. One brother who does radio out here even changed his name to Obama.. From what I gather the President and his people have a strong presence in Charlotte.. There’s a lot of communication. 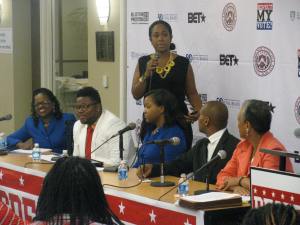 A lot of that support was evident when I went to the BET/HiP Hop Caucus Town Hall on Voter Suppression. It was packed with crowds spilling into overflow rooms. The Hood was definitely there.. Folks were attentive, soaking up the array of info on voter suppression tactics and what they need to do to combat it.. That townhall was impressive and scary just hearing all the madness being done to stop votes…From where I sat folks  at the townhall were rolling hard with Obama…

Some of this came to a head yesterday when about 30 members of local union UFWS, mostly African American came to a recently occupied Marshall Park in the center of the city wearing yellow shirts and said Obama 2012.. Seeing how much the unions spoke out against Obama at the big March the Day before, some of the Occupy folks confronted them an a war of word ensued.. The labor cats were chanting ‘4 More Years‘, Occupy folks chanted ‘No More Wars‘.. No More Years‘.. It got pretty heated.. The union cats refused to interview with me as they left in disgust.. The Occupy folks I spoke to said these guys were being corporate pawns and gave breakdown of where and how these folks had dropped the ball and in been slow in organizing.. Others said Occupy was out of line and made things ugly.. Occupy was definitely the aggressor and more animated in the situation.. Many were quite clear that corporate dominance is a problem in both parties. The racial dynamics did not go unnoticed of the Black union members and the 20 or so mostly white Occupy exchanging words over Obama..

Having a huge presence here in Charlotte are brown folks, many undocumented who came to the march deep  and held a Fear No Papers rally last night.. That rally was heavily supported by those who are documented.. Many are not happy with Obama and even though the President has promised to ease back and give folks a break, many are still angry that over one million folks were deported. That means one million families were broken up.. Most undocumented folks are connected to families who are citizens.. So each deportation means a mother, father Uncle etc has been shipped out..  Brown folks from all over, are here and they are geared up to hold a big event tomorrow night.. I don’t get the sense of excitement the way I did in Tampa last week..

The opening party held at the Music Factory was blah..Noticeably absent were all the big stars especially young popular artists and actors..No Jay-Z, Will I am, Diddy etc.. It’s not like 08 in the least ..The bulk of the people arrive today and thus that may change..Earlier this week there was a large contingent of local and underground artists including Rebel Diaz and their collective and Jasiri X among others.

Whereas Mitt Romney had to work at getting people to like him.. Obama will have to work at energizing young people and other parts of his base responsible for getting him into office..  In fact Obama the big concern now is whether or not Obama will be able to pack the Bank of America Stadium which seats 73k.. If that place is not packed , whatever damage Clint Eastwood did to Romney will be countered by photos and footage of a half filled stadium. He has Mary J Blige, Earth Wind & Fire and Foo Fighters performing, but there is still no buzz..Obama better hope the sporadic rain storms Charlotte is having occurs Thursday night..Tonight Michele Obama speaks. Also Julian Castro Mayor of San Antonio speaks.. The DNC is really going hard to win over Brown votes..