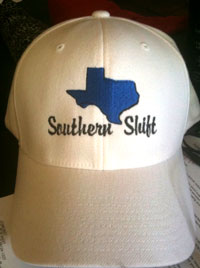 Saw this article today by Dave McNeely and he makes some good points about the upcoming gubernatorial race, the challenges facing the state and the likely changing political landscape of the Lone Star state. However, what he’s not saying is the obvious-Why are the Democrats so Spineless? Are they cowards afraid of stepping up and being counted in any of the upcoming races? I just knew after all the excitement that President Obama inspired with his impressive victory that shattered the myth that those politically waving a blue flag can only win in states along the Pacific or North Atlantic seaboards. Obama and Howard Dean prior to him showed and proved that the rest of the country is up for grabs including Texas if you run the right type of campaign.
For the average person electoral politics on a national level is diluted down to Red state or Blue State.  Its a winner take all system so unfortunately what gets missed are the growing demographic trends within a state.  There was a breakdown of voting trends that was studied by Robert Vanderbei of Princeton University after the 2004 elections and what he showed was that in many of those red based states it was actually purple. Meaning that there was an equal or very close strong representation of Blue-(Democrats) and Red (Republicans). Texas was one of those states in 2004 that was showing a lot of purple with a prediction that it would eventually over take the bright red shade dominating this place. 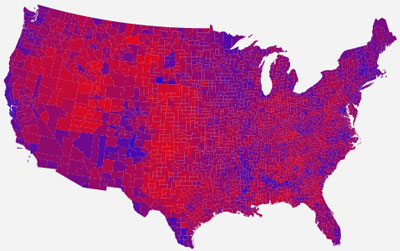 2004 Map from Princeton University shows the country is purple. The blue areas are usually much more heavily populated then read areas.

With this in mind and an oppressive Obama win showing that if you tap younger, Browner, and Blacker demographics you can do quite well for yourself.  Texas has all the right ingredients so where the hell are the Democrats eagerly chomping at the bit ready to shake things up?  Has there not been any long term planning? Have people not been groomed? Did anyone not take page from Obama and start a media campaign a couple of years out from a major run to create a buzz and become known factor amongst untouched demographics as well as those who are moderate and dissatisfiedwith the status quo?

Insiders say Austin Democrat Kirk Watson might run for Governor, but he needs to step up his profile game and be better known to newer and younger voters

I been asking around from Houston to Austin and most of the folks I come across who were excited about Obama and came out to enthusiatically help put him in office seem to not know anyone on the Democrat side who they feel should be running for governor or the eventual vacated Kay Bailey HutchinsonSenate seat. Thats not a good look. Not a good look at all. Sure political insiders like to toss out Kirk Watson as a possible candidate for governor, but too be honest I get more excitement and better name recognition when I ask if rappers Bun B or Chingo Bling should run for office.  Who knows one of them might just do that if for any reason to

1- bring attention to some key issues that are resonating with  2- do what the Democrats seem to not be doing -brand themselves which is an important currency to have  in a celebrity culture driven world.
A lot of people are looking for a hero or shero of sorts. Someone who can symbolize the sparking of change that Obama talked about during his campaign. They’re looking for someone to come talk to them and champion their causes. They’re looking for someone to step up, pull out their political sword and fight. Even if you lose folks will respect your willingness to go out there and mix it up.  Right now all we see  a bunch of empty seats and hear crickets chirping.  Are there no more Mickey Lelands or Barbara Jordans?  The closet we have to that right now is Congressman Ron Paul who found himself a nice niche.. That would be quite a show if he ran for Governor.. but lets not digress. Say what you will, but I keep getting this nagging feeling that Democrats are purposely holding back. Why? I know not-
According to a recent Quorum Report Democractics Chet Edwards and Ciro Rodriguez  were huddled up in a corner talking with Republican  Lt. Gov. David Dewhurst who has made no bones about his desire to take over Kay Bailey Hutchinson‘s seat. What the hell were they talking about?   Here’s what the Quorum Report noted..
Dewhurst spent Thursday afternoon chatting with the two Democrats in the halls of the U.S. Capitol Building. They ran through issues ranging from the Hispanic vote to the partisan breakdown of Texas to Dewhurst’s chances of success in running for the Senate seat being vacated by Kay Bailey Hutchison (R).
Dewhurst has not-so-quietly been ramping up a campaign to replace Hutchison, who confirmed Wednesday that she will resign her seat this fall to run for Texas governor. She plans to formally announce her 2010 gubernatorial run next month..

Port Arthur native Bernard Freeman is one of the most recognizeable and popular people in the entire state of Texas. Him entering the governor's race could seriously shake things up

Well all that sounds fine and dandy, but Edwards and Rodriguez be better off  huddling up with the folks who put Obama into office and making sure they are household names to that audience.   In anycase  what may wind up being being the real story here is the lack of a compelling Democrats in a wide open race in a wide open state. If someone doesn’t put their hat in the ring soon, we might be placing a call to Port Arthur Texas, to a gentleman named Bernard Freeman and encourage him to toss his hat in the ring and shake things up.  He just might just be what the doctored ordered for a party that is winding up to be a bit uninspiring right about now.  Note to Democrats: new Obama voters know who Mr Freeman is quite well-Do you?

Not often does a sitting United States senator challenge a governor of the same party, in the nation’s second most populous state.

But the governor’s general election race in November of 2010, regardless of who the GOP nominee is, could also draw a lot of attention. Texas might become a player in presidential elections again.

The only serious announced candidate for the Democratic nomination is Tom Schieffer of Fort Worth, former President George W. Bush’s ambassador to Australia and then Japan. Humorist/songwriter Kinky Friedman also might seek the nomination.

But if the Perry-Hutchison mudfight keeps intensifying, other Democrats may run.

Most-mentioned is state Sen. Kirk Watson of Austin, who already has one statewide race under his belt. His weekly newsletters to supporters are decidedly sharper recently – mostly potshots at decisions by Perry.

Watson’s Senate seat is also up in 2010. He said he’d decide what to run for at the end of the summer.

Most prognosticators think the Republican nominee will win the November general election. Perry certainly does.

But hopeful Democrats point out that Perry won reelection in 2006 with just 39 percent.

Republicans nationally think their chances to make gains are better in 2010 than in 2006 and 2008, when Democrats won control of Congress. Reasons:

— With few exceptions, a new president’s party usually loses congressional and other offices in the first mid-term election after his inauguration.

— Some pollsters say the bloom has worn off Obama’s reformist rose, with growing concern about borrowing to provide economic stimulus, and about the costs of reforming the nation’s health care system to cover virtually everyone.

Depending on which way issues cut leading up to the election – health care, unemployment insurance, housing prices, economic stimulus, the overall economy, Iraq and Afghanistan – Democrats may have a shot.

If the Republican nominee emerges seriously tarnished from the negative TV ad war Perry and Hutchison are expected to wage, the Democrat may have a shot.

Adding to the buzz this election cycle will be a special election to succeed Hutchison in the Senate. That also should draw a lot of national attention.

Two significant Democrats – former state Comptroller John Sharp and Houston Mayor Bill White – are already running, regardless of when the election is held.

Both have appeal to centrist Independents, and some Republicans, so are particularly suited to run in a special election. There are no party primaries; all candidates run on the same ballot, regardless of party. If no one gets a majority, the top two have a runoff.

Sharp and White are serious, thoughtful, cagey politicians, who aren’t running just for exercise. Both are raising money, and Sharp has put more than $2 million of his own into his race.

The wealthy Dewhurst is thought to be the most formidable Republican, since he can fund a campaign from his own pocket. That’s a huge head start in a federal race, where the size of campaign donations is limited, but the amount a candidate can give to their own campaign isn’t.

If Democrats win for governor, or senator, and especially both – that should put Texas back on the presidential political map for 2012 and beyond.

A Democratic presidential candidate hasn’t won Texas since 1976. There had been an adage that a Democrat couldn’t become president without carrying Texas – until Bill Clinton did so in 1992 and again in 1996.

If a Democratic presidential ticket carries Texas, plus California (which has been solidly blue the last few elections), Florida (a swing state), New York and Illinois, that’s around 170 of the 270 electoral votes needed to win the White House.

A Democrat who demonstrates they can win either of the top two Texas statewide offices in 2010 could easily be on the short list for a presidential ticket in 2016.