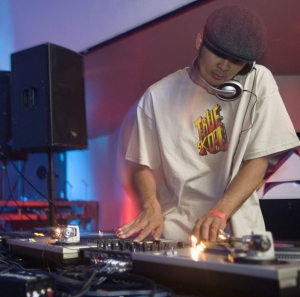 There’s some big doings going down this week at Club Mighty in San Francisco.. Legendary Bay Area deejay Ren the Vinyl Archeologist who heads up True Skool is celebrating 13 years of putting it down and giving us some dope parties to stimulate our soul and mind.. We caught up w/ Ren to ask him about this Friday’s impressive line up and his thoughts on the current state of deejaying.. We also got a chance to peep Ren in the mix…Enjoy the convo and mix below 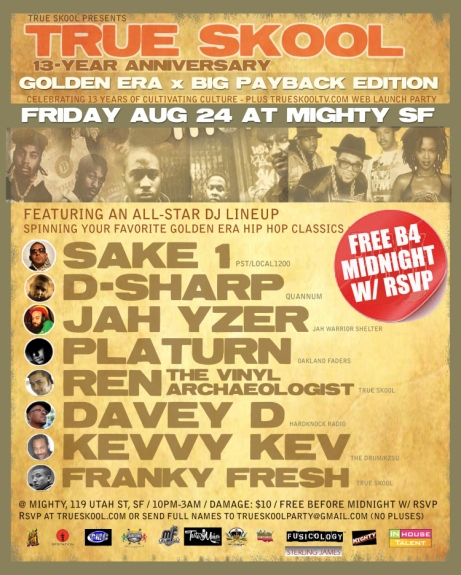 It’s always a pleasure and enlightening to sit down and chop it up w/ Atlanta emcee Killer Mike. He’s never at loss for words and he pulls no punches when speaking on political situations. Our recent sit down w/ Mike was no exception.. We talked at length about his new album R.A.P. Music which was produced by EL-P of Def Jux fame. Many would not associate the pair because on the surface they appear to be on opposite sides of the musical spectrum, but in reality they have lots in common.. The album they created is a hard-hitting masterpiece that seriously bumps and lyrically is a breath of fresh air and a much-needed nourishment shot for the dome.

During our interview we started off talking about the album’s lead single ‘Reagan’. This is an excellent scathing critique of one of the worst presidents this country ever produced who in recent years has seen millions of dollars poured into campaigns to sanitize his image. Killer Mike accurately reminds us that Reagan was a criminal who answered to a powerful cartel who ultimately controlled him. Mike goes in on both the song and interview about Reagan.

He also pulls no punches on other Presidents including Barack Obama who he famously stood up for and supported in 2008. In fact during the 2008 Ozone Awards, Killer Mike sitting on a panel pushed his rap colleagues to clean themselves up, put on their Sunday best and not allow any industry rap BS be the downfall of than candidate Obama.

In our interview, Killer Mike explains that his position on Obama didn’t ‘evolve’, it was part and parcel of what one should do when you elect someone to office. He noted that all politicians need to be pushed and held accountable and his responsibility as someone who is active in voting and helping get folks in office is to speak up, be loud and make sure they understand there will be political consequence fr not doing right by the folks who support him/her.  So, yes he supported Obama. In 08 he was the best man for the job, but the nature of the Presidency is to do the bidding of those who push him the hardest, and hence Mike brings heat in challenging Obama and anyone who is in office.

In our interview Killer Mike lays out what he says should be top priorities for any President seeking his vote as well as many within the Black Community. He details a job program in which folks coming into the community must partner with residents. He also talks about expunging the record of those who were incarcerated and returning home. Mike talks about the importance of providing programs and opportunities so one doesn’t return to prison which ultimately impacts the larger community.

During our conversation we talked about standout songs like the melodic ‘Anywhere But Here‘, where Mike gives us a thoughtful and compelling view of New York City and Atlanta. In the first part of the song, he talks about Mayor Michael Bloomberg, Stop and Frisk and the ghost of Sean Bell and others who are victims to police terrorism. He talks about the importance holding police accountable via the Mayor and other politicians who control them. He explained that anyone who allows the police to be out of control  don’t politically punish the Mayor for allowing this to happen, has missed the mark in a big way..

New York City is contrasted w/ Killer Mike’s hometown of Atlanta which he describes as a Black male heaven because of its abundance of opportunity, Black office holders and beautiful women. In the song Mike notes how in a city of such abundance, Black blood is still being spilled, with young brothers playing the role of villan vs the good guy who many feel never win.

It’s a powerful cut and during our interview Mike expands upon the political and social dynamics of Atlanta and its relationship to the rest of Georgia. He noted that one day he may actually run for office because he feels that strong about his city and wants to see it improve.

Just is just a short summary and doesn’t do justice to Killer Mike’s passion and love for his community and this music we call Hip Hop.. We divide this interview up in two parts..

Click links below to listen to our interview w/ Killer Mike

Baltimore native Maimouna Youssef is a breath of fresh air at a time when far too many are stale with their desire to be good marketers and packagers, reality TV stars or an over-the-top controversial figure vs being a damn good artist.

Because Maimouna who is best known via her nickname Mumu Fresh, stays focused on exploring and highlighting her art as opposed to marketing herself, there are many who are reading this who will note they never heard of her.. That’s ok, its time to get familiar because the sista is no joke.

First you should know she’s a songwriter and producer. Yes, she gets busy behind the boards. Also, she’s a dope singer with a soulful angelic voice.

If that’s not enough she’s nice on the mic as an emcee and will definitely take your lunch money if you step to her wrong in a cipher.. She’s been nominated for a Grammy, Best Rap song for her contribution on the song Don’t feel Right by the Roots.. That’s her you hear flipping the hook.. We thought you knew

Over the years Mumu Fresh has performed and worked with everyone from Nas to Talib Kweli to Big Daddy Kane, Jill Scott, Mos Def, Eryka Badu, Zap Mama, dead prez, and Cody Chestnut to name a few..On top of all that Maimouna ghostwrites for quite a few folks..She’s definitely well respected and sought out by her peers.

Those are just few highlights.. What really shines about this sista is the fact that she comes hard on the cultural and political tip. She doesn’t preach or get all up in your grill telling you how you need to act or what and who you should believe or follow, but her presence is strongly rooted in the tradition of revolution and freedom fighting. You hear that in songs like title track featuring Zap Mama of the Blooming album..or in tracks like Wake Up which takes on Monsanto.

The fact that Maimouna has remained independent by choice speaks volumes about where her head is at. In our interview featured below, she talks about the importance of positioning oneself to have true artistic freedom..With respect to her music, it goes beyond way beyond cheap sloganeering. Its nurturing for both the mind and soul and defies all industry labeling limitation. On her new album the Blooming, you have songs that are rap, songs that are bluesy and others that funk oriented.. Mumu says at the end of the day, its all Black music and as an artist she goes deep and takes us on an incredible journey through all types musical genres connected to the African diaspora.