19 years ago today…one of the greatest Hip Hop albums of all-time was dropped Enter Wu-Tang the 36 Chambers and the world was introduced to an incredible group, that many initially thought was Chinese.. When we first heard the lead joint Protect Your Neck and heard them claiming they were from Shaolin and was going by the name Wu-Tang Clan,  many of us outside of New York were marveling at how Hip Hop had expanded and some raw Asian cats were repping hard on the mic..

Later we discovered the who the group was and their depth of talent and remained impressed. We loved how artists like Rza and Gza who had previous stints as solo artists  or in groups like Grave Diggaz under the names Prince Rakeem and the Genius respectively, had remade themselves and resurfaced as cornerstones of this new 9 member crew..that would flip Hip Hop upside its head. Many of us were left awestruck to see how Staten Island, the so-called forgotten borough had become the epic center for Hip Hop nearly overnight..Its been almost 20 years and many of us still have not fully come to know and appreciate all that is and has been Wu-Tang.. 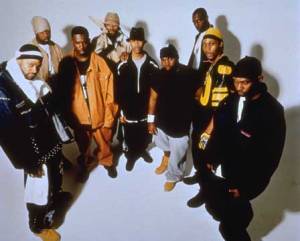 This is what writer  Christopher Muhammad who reminded us about today had to say..

This day 19 years ago one of the greatest Hip Hop albums of all time by arguably the best rap group of all time was released November 9, 1993 on Loud Records and distributed through RCA Records. The album’s title originates from the martial arts film The 36th Chamber of Shaolin (1978). The group’s de facto leader RZA, also known as Prince Rakeem, produced the album entirely, utilizing heavy, eerie beats and a sound largely based on martial-arts movie clips and soul music samples.

The distinctive sound of Enter the Wu-Tang (36 Chambers) created a blueprint for hardcore hip hop during the 1990s and helped return New York City hip hop to national prominence. Its sound also became hugely influential in modern hip hop production, while the group members’ explicit, humorous, and free-associative lyrics have served as a template for many subsequent hip hop records. Serving as a landmark record in the era of hip hop known as the East Coast Renaissance, its influence helped lead the way for several other East Coast hip hop artists, including Nas, The Notorious B.I.G., Mobb Deep, and Jay-Z.

Despite its raw, underground sound, the album had surprising chart success, peaking at number 41 on the US Billboard 200 chart. By 1995, it was certified platinum by the Recording Industry Association of America for shipments of one million copies in the United States. Initially receiving positive reviews from most music critics, Enter the Wu-Tang (36 Chambers) has been regarded by music writers as one of the most significant albums of the 1990s, as well as one of the greatest hip hop albums of all-time. In 2003, the album was ranked number 386 on Rolling Stone magazine’s list of the 500 greatest albums of all time.