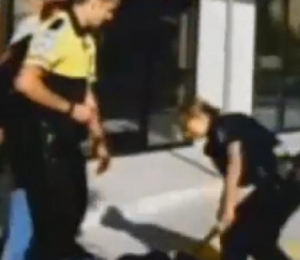 Sadly we have yet another troubling incident with police.. This time we have cell phone videos showing officers restraining an unarmed man who attempted to barricade himself in a store.. He’s shown being restrained by one officer, while another officer with a heavy baton beats him at least 10 times.. The man became unresponsive and later died.. The officers who remain unidentified are on administrative paid leave..

This troubling video comes two weeks after 8 Kern County Sheriffs beat an unarmed man named David Silva to death. An autopsy was released the other day saying the man died from a heart attack and not the beatings by 8 officers.. It’ll be interesting to see what sort of excuse is used for this beating in Sacramento..

All this comes on the heels of police officers shooting 26 year old Amos G Smith 8 times in the back of the head right here in the Bay Area.. This took place in Union City which is 20 miles south of Oakland..You can read about that HERE

I’ll say this as I did in the past, folks who organize around this need to push to make sure whenever there is allegations of police terrorism and abuse that there is a department completely separated from law enforcement that does the investigation.. That means the DA, the Coroner etc are not in the loop in any way.. Police routinely work with these individuals and departments and thus the relationships seem to compromise any sort of objectivity…

Also folks especially in Cali need to push and push hard to end the Policeman’s Bill of Rights which give cops damn near immunity to anything they do.. It keeps their names hidden from the public as well as their records.. So in the case of the 8 officers who beat the man to death in Kern County or the 6 officers who shot at two women delivering newspapers 100 while they were searching for renegade officer Christopher Dorner or in this recent incident in Sacramento, we have no way of knowing if they have history of abuse.. The Policeman’s Bill of Rights keep that hidden..The PBOR was enhanced and made more airtight last year..

As we close out its important to keep a close eye and hold these public servants who we give a badge and a gun accountable..While we have these disturbing incidents of brutality, we also have abuse of power as we are now seeing was the case with Boston Police, who everyone hailed after the Boston Marathon Bombing.. people cheered and toasted these officers for their work, while never questioning why they used 9 thousand officers to go searching door to door for one 19-year-old kid door to door..

We are now discovering that the elite unite within Boston Police known as BRIC.. were busy surveilling peace activists and anti-war demonstrators and wound up ignoring warnings about the two brothers, one who was on a terror list.. They became obsessed with with smashing down on citizens doing peaceful protest to the tune of millions of dollars versus following up on serious threats..In fact one of the people the Boston Police kept spying on wound up being a hero who helped saved lives during the bombing. His name is Carlos Arredondo a well known activist in the area.. Read about that HERE

Below is the newscast and report of the 8 deputy sheriffs beating a man to death..

17 comments on “Police in Sacramento Beat an Unarmed, Restrained Man to Death”