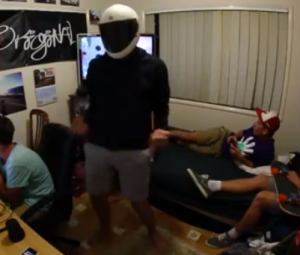 Wanna know why so many got upset w/ the Harlem Shake phenom? It wasn’t so much because white kids who never heard of the dance doing it.. I think for a lot of folks that’s what was easiest top grasp onto.. but for many there was something else going on.. many weren’t quite able to articulate and pinpoint it, but something about this just felt foul..

Well here’s what was going on.. what was driving this Harlem Shake thing, wasn’t a bunch of folks sincerely having fun.. It was corporations getting behind this video and making the whole thing pop to the tune of big time money… So yes, folks were right when they said the Harlem Shake was the ‘Gentrified Harlem Shake‘ a term I first heard from writer dream hampton….To be accurate it was corporate gentrification.. The end game was to make  it appear as if everything was spontaneous..but it was anything but.. I like to use the words ‘social engineering‘…to make it plain and simple, call it manipulation or just straight up pimping…

When speaking to classes, I remind folks today’s generation is being bombarded from all angles with information specifically designed to make them consumers and followers and not thinkers.. This Harlem Shake thing is a perfect way of showing how that happens.. This article below lays how all this went down and even though it doesn’t specifically lay this point out, I would emphasize, there’s no meaning to the phrase ‘let the buyer beware‘ or in the words of Chuck D from Public Enemy ‘Don’t Believe the Hype‘..here’s an excerpt from the Mashable article.. The entire piece can be found at;  http://mashable.com/2013/03/30/harlem-shake-corporations/

You Didn’t Make the Harlem Shake Go Viral — Corporations Did

Google’s trend charts of the phrase “Harlem Shake” are seismic. Almost no one looked for the words until Feb. 7, then searches surged faster than any term Google ever had, except for “Whitney Houston” after her death. A few weeks later, they fell close to zero.

Experts said the “Harlem Shake” phenomenon was emergent behavior from the hive mind of the internet — accidental, ad hoc, uncoordinated: a “meme” that “went viral.” But this is untrue. The real story of the “Harlem Shake” shows how much popular culture has changed and how much it has stayed the same.

The word “meme” comes from evolutionary biologist Richard Dawkins. Bits of information — memes — propagate from brain to brain through imitation, are subject to selection and can be regarded as living structures, he says, “not just metaphorically but technically,” because new information changes our brains. They are often made deliberately — think catchphrases, slogans, melodies — and makers may try to propagate them as fast and far as possible, or make them go viral. The myth of the “Harlem Shake” is that its viral spread was spontaneous, not directed by financial interests — a pop culture, popular uprising. Here’s how the meme and the myth began.

This week on our daily show, Hard Knock Radio we talked with long time political activist and former senior advisor to the Mayor of London Lee Jasper.. He alerted us to some disturbing news about the plight of Black folks living in the UK and throughout much of Europe as so-called austerity measures kick in..

For many it should not come as a surprise,  but Black folks are catching major hell as they are being scapegoated for the economic hardships many are experiencing.. For example in places like Greece, Black folks are literally being chased out of the country by uniformed goon squads.. White supremacist, Neo-Nazi hate groups and far right reactionary political parties are on the rise with Blacks and other immigrants as primary targets

We are now seeing the fallout of misguided foreign policy which has complicated this situation. Ongoing conflicts in Mali and in Libya which has resulted in thousands of Black folks fleeing Africa to various ports in Europe only to be turned away. The irony here is that its NATO/ and Western foreign policy that has led to this mass displacement..

During our conversation Jasper went into great detail about the types of policy measures taken to keep Black folks disenfranchised and in economic peril. He also noted the widespread police brutality many are experiencing. He noted whats been going on in France with many Blacks and the out of step perception put forth by popular artists like Jay-Z and Kanye when they did their song N–as in Paris and how that contrasted with the reality that Black folks in this fabled city who are treated like ‘N–gas in the worse possible way..Jasper noted

Lee also updated us to whats been going on since we saw the massive uprising in the UK two years ago and in Paris 6 years ago..

Lee has a wealth of information and will update us again in the near future. In the meantime.. Peep the insightful Hard Knock Radio interview by clicking the link below..

You can also read an indepth report of what’s going on in Greece as Black folks are being attacked.. Go to the link below

Glad to see Rebel Diaz and the RDACBX Collective are standing strong and pushing back hard in spite of the set backs imposed on them by the greedy developers in the Bronx, NYC and its gentrification projects and the FEDs.. After the group painted a mural on the walls of their community center, bringing attention to political prisoner Mumia Abu Jamal, there was a chilling response from those in power.. The building owner refused to sell the space to the group and he refused to take their rent or negotiate for new terms… He also never expressed concern about the mural..but nevertheless the group came to learn it was a trigger..

As they noted in a recent press conference, RDACBX is not limited to a building, it’s the spirit of the community and that community is everywhere and expanding..Their latest project is a song and dope video that pays tribute to the late Venezuelan President Hugo Chavez who was a big supported of the South Bronx community center the group and the neighborhood built.

Here’s what they penned about the video..

The direct connection we have with the The Bolivarian Revolution is
that our community space The Rebel Diaz Arts Collective -BX (RDACBX)
was directly funded by Venezuelan owned oil company- Citgo. For 4 1/2
years we received direct assistance from Comandante Hugo Chavez and
the people of Venezuela.

This song is our tribute to him as we consider him to be a champion of poor people around the world. Hugo
Chavez supported Hip Hop in The South Bronx. Hugo Chavez is Hip Hop.
Our community space was violently shut down on Feb. 28th by The NYPD and federal
marshalls. We know what it is. We were a threat because we were
teaching the youth, speaking out against Stop and Frisk, doing
political graffiti, doing open mics, etc.