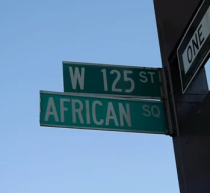 So everyone is doing the Harlem Shake…I been wishing some folks who are actually from Harlem before the pink poodles, fancy latte shops and Pilate joints up would do this and show folks what the Harlem Shake is really about..

I’m old enough to remember when the Harlem Shake is what you said when describing junkies nodding off around 145th..

Of course we had the Harlem Shakedown.. That’s when stick up kids got at you after you left early Hip Hop spots like Harlem World.. Sad part is was usually Brooklyn kids doing it.. Damn rowdy ass BK..LOL

The Harlem Shake is what some would say about thick sistas walking up 125th..rocking tube tops in the summer time..Nothing like Summertime in Harlem

There was the Harlem shake when folks crossed you over on the basketball court.. at various pick up spots around Harlem..Wait till you see the new movie by Bobbito Garcia that focuses on pick up games in Harlem..