Over the past week, Southern Cali police had more than 1000 officers combing mountains, stopping traffic on major freeways where cars were held up for hours, they offered a million dollars making it the highest reward ever offered for a wanted person in state history and that’s just for starters…

During the past week, LAPD shot 3 innocent people without identifying themselves as police officers.. They set up 50 separate security details to protect the families of cops who were ‘threatened’ in the manifesto said to be written by former LA cop Christopher Dorner..

During yesterday’s shoot out in the San Bernardino mountains’ near Big Bear they allowed a cabin where Dorner was said to be held up to burn completely to the ground.LAPD spokesman Andy Smith was livid when it was suggested that police had identified the remains that are supposedly in the burnt down cabin.. He said that the building was too hot to enter and that it would take some time to ID the body.. Police as of this morning 2-13-13 are still on tactical alert ‘looking’ for Dorner…

I want folks to look at some of what I mentioned and really think about this..I know many who dislike the police would like to believe that one man had one of the most militarized and largest police forces in the world, was spooked over threats and subsequent actions from one man..Some have gone so far as to call Dorner a modern-day Django. Others have noted that Dorner with his military training gave him a tactical edge and made him the most dangerous suspect ever faced by LAPD…

While its true Dorner is a military guy, he’s not the only military guy. LA under past chiefs like Daryl Gates, and  William H Parker before him, made it a point to hire military men to be on the force. Again LA is one of the most militarized police forces in the country..LAPD has long prided itself on having the latest tools and weaponry at its disposal. Many of the police practices we see around the country come from LA including SWAT Teams which originated in LA..  There are lots of former Navy Seals, Green Berets, Marines, Special forces guys etc..all up in the ranks of LAPD and So-Cal police forces in general. So yes, Dorner was a trained cat not to be messed with, but he was not the only one at the party who could get down. There are just too many cats with similar and superior skills on that force that would not be spooked by one cat..

Again let’s think about this..On the criminal tip, Southern Cali is home to some of the most ruthless, well armed and vicious organized gangs.. The Mexican mafia, Armenian mob, Aryan Brother Hood, Skin heads, Biker gangs like the Mongols & Hells Angels Russian mob, drug cartels of every stripe, Crips, Bloods etc.. This is gang land for real..and many of those gangs are openly hostile to LAPD, yet we have never seen the resources and all stops pulled up to confront them, the way they did Dorner…We never saw this much power even after some of those gangs were deemed domestic  terrorists..and even after we’ve seen some of these outfits do everything from murk entire families to terrorize entire families or ethnic groups..

There have been several rebellions in LA over the years, the most glaring the 92 Rodney King Rebellion.. After the acquittal of the 4 officers accused of beating Rodney King, LA erupted as members of some of LA’s largest gangs that had recently formed a truce, sat on national TV and pretty much promised to go after LAPD.. We saw the Parker Center police headquarters destroyed by angry mobs.. We saw armed groups, many of them gang members take to the streets..

During the hey days of the Black Panthers, US and other Black and Brown militant groups that routinely mashed with LAPD and had shootouts we did not see the type of resources to track down and confront any of these groups, the way we saw with Dorner..and we know LAPD went pretty deep with those groups..as explained by former Panther Erika Huggins

Some suggested LAPD went all out because Dorner was deemed a serial killer Cali has had more than its share of serial killers and we never ever saw massive manhunts like this. Not here, not anywhere.. Freeways weren’t shut down for hours, safe houses and protections squads weren’t assigned to everyone in danger.. I recall back in 200-2001 when the niece of former LA Police Chief Bernard Parks was killed by gang members we didn’t see this type of all out manhunt or even all out efforts to completely eradicate the gang. Nothing like what we saw with the quest for Dorner..So why now? Was it because he was a rogue cop?

For those unfamiliar with Southern Cali, there’s a few other things folks should know about how the police get down.. There have always been rogue cops.. For example, for a long time, LAPD and LA sheriffs had beef with each other and it was not unusual for squads to actually square up and go at each other like a gang.. 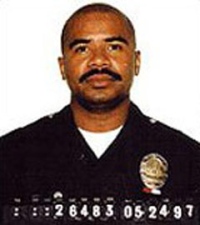 We also know that long before the Jump Out Boys, a rogue gang of cops  recently exposed for shooting Black and Latinos leading to seven members fired the same day Dorner posted his manifesto, that Southern Cali police departments within their ranks had long had social clubs/ gangs  many of them white supremacist.. But as we saw leading up to the Rampart Scandal and the saga behind Death Row records and the death of death of Notorious BIG,  there were Peace officers of color who were associated with street gangs including the Bloods. The point I’m making there have long been rogue officers, some friendly, some not so friendly to the force, but still never this much manpower to quell…

Say what you want, but this situation with Dorner has the looks of police not scared of one man, because he made threats or had weapons. This had the look of someone trying to find something.. What that something is, one can only guess, but as I said last night when they let that cabin burn and then announced they couldn’t tell if the man reported inside was Dorner.. ‘something don’t smell right in the city of Angels ‘

What did that man know and was all this man power simply to stop him or retrieve something he had?  Was the mission to make sure he went to his grave with sordid secrets? We may not get immediate answers to any of these questions, but we best keep asking.. LAPD no matter what they say was not spooked or felt they was in some sort of imminent danger as they would like us to believe..not with all those resources, man power and history.. Nn the words of Public Enemy Can’t Truss It..