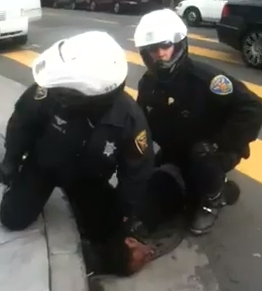 ***Update**** The folks from Poor News Network have been following this case and released the following information about the young man shown in the video…His name is Kevin Clark and he’s an 18 year old Honors college student ..He was brutalized by the SFPD for simply walking down the street? He was not charged or arrested but cited for resisting and delaying. …..

The city of San Francisco, once a home to counter-culture and folks who were free-spirited has changed for the worse over the past 5-10 years.. Borrowing a page from New York’s Michael Bloomberg, the city by the Bay has modeled itself after New York by trying to become a playground for the über rich.. Poor folks mostly Black and Brown have been gentrified out of the city as the average rent has skyrocketed to 3500 for a one bedroom..

Over the past 10 years there’s been an explosion of ugly lime green (luxury green) high rises where starting price is a million dollars.. According to Tim Redmond of the Bay Guardian in a recent radio interview on KPFA, the target audiences for these new buildings are world travelers who seek to have homes in a variety of cities.. San Francisco being one of them.. His remarks underscored the landmark issue the BG called Soul of The City that focused on all htose being forced to move out of SF.. You can peep it HERE

As the SF has attempted to luxurize itself, one of the other tactics they attempted to borrow was Stop and Frisk from New York City. Mayor Ed Lee said he thought it would be a good idea, even SF is not known for being a violent city with an out of control crime problem.. many suspected that Lee would be concentrating Stop and Frisk efforts on folks living in the Tenderloin, which has a large homeless population and is an area where the mayor would like to see more high-tech companies relocate.. Twitter is already located in the tenderloin, not paying any taxes.

The other areas where many suspected Stop and Frisk would be used was in Bayview Hunters Point, the City’s last Black neighborhood.. Over the past 10 years Blacks have been moved out of SF with the population which was once a healthy 15% now less than 5%..

The other place where police repression was likely to be applied is ion the historic Mission district which is home to a very large Brown/ latino population. For folks who never been, the Mission has a similar vibe to LES/ The Village in New York, with alot of foot traffic, international flare, victorian houses which remind folks of brownstones and tons of eateries. . Many rich folks from out of town have been moving there, causing rents to rise and displacing long time residents. 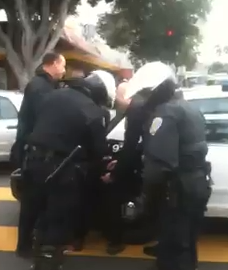 The Board of supervisors voted to over rule the mayor and turned down Stop and Frisk as level headed San Francisco residents made a huge stink. However, the Mayor undaunted along with his police have turned to another tactic.. Hunting or wolf packing. This how a a former San Francisco resident forced to relocate to Oakland described the tactic when she sent me this video of what she noted is this growing trend..

In the video below, you will see an example of this as  young Black man is nearly run over by a cop on the sidewalk..According to witnesses, he got into an argument with another cat his own age when police arrived upon the scene and immediately used their bikes to run him off the sidewalk…

He’s then slammed to the ground and his face mushed in the gutter for several minutes.. The suspect who is small is not resisting as more then 15 officers show up to arrest him.. The show of force is deliberate and a way of trying to intimidate residents.. It’s a damn shame to see this sort of abuse of power especially when you consider mayor Lee who was largely applauded for being the City’s first Asian-American Mayor was supposed to be a long-time Civil Rights attorney. I guess we shouldn’t be surprised as many traditional civil rights orgs and leaders has been turned the concept upside down.

This is a city who’s police department in the past year had to toss over 50 cases of trumped of felonies thanks to corruption. This is also a police department that shot a man (Kenneth Harding) and let him lay dying in the street for all to see when he couldn’t produce proof of a two dollar fare..