Looking at these clips make you wonder when will we have another sports figure to match Ali’s wit, charm, charisma and fearlessness? He’s still the greatest of All-time

In this clip, shows Muhammad Ali in 1969 is talking about his resisting the Vietnam war..He’s on point big time…

A great collection of Ali sound clips and highlights from a variety of fights..

Great discussion where Ali explains his strategy behind fighting and beating George Forman and why he thought Rocky Marcianao as the greatest boxer ever..

Thirty years ago—at the height of New York City’s “War on Graffiti,” and in an act of faith utterly incommensurate with the city’s public demonization of graffiti writers—a group of teenagers named SHY 147, DAZE, MIN and DURO met with MTA official Richard Ravitch, and proposed a deal. Give the writers of New York City one train line to adorn with their vibrant aerosol murals, and they would leave the rest alone. Let them paint for six months, then let the public vote on the merits of their contribution.

Ravitch suggested that if the writers wanted to contribute, he would give them all brooms, and hostilities resumed. The subway’s exteriors have been art-free since 1989, but the war has never really ended. New York City remains rigidly opposed to the very aesthetic of graffiti—even if the art in question is perfectly legal.

Today, advertisers have learned to faithfully, if flavorlessly, appropriate graffiti’s ethos of logo repetition, as anyone who has ridden the train lately can confirm. In the city that incubated the most important popular art movement of the 20th century, the message is clear: public space can be yours, if you pay for it.

Unless what you put there reminds them of graffiti, that is. I learned this last week, when I tried to buy space to advertise my new novel. The silver walls where “burners” used to blaze are now for rent; anyone willing to pay fifty thousand dollars to a company called CBS Outdoor can buy advertising “stripes” for a month. For considerably more, one can “wrap” an entire train in product messaging.

“The issue,” CBS Outdoor wrote in an email, explaining why my proposal had been rejected, “is the style of writing. The MTA wants nothing that looks like graffiti.” 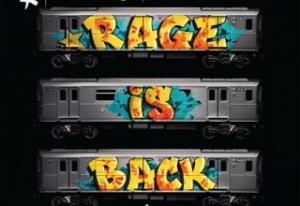 Admittedly, my book title is rendered in colorful, flowing letters, by the Brooklyn artist Blake Lethem. Admittedly, this would not have been the first time Mr. Lethem’s work had graced a train. But what exactly is the rubric by which the MTA judges a letter’s graffiti-ness? At what stylistic tipping point does a word becomes impermissible to the same entity that has approved liquor adverts depicting naked women in dog collars, and bus placards featuring rhetoric widely condemned as hate speech against Palestinians? And if the NYPD defines graffiti as “etching, painting, covering or otherwise placing a mark upon public or private property, with the intent to damage,” isn’t a graffiti-style letter kind of like a robbery-style purchase?

All this might seem trivial, except that the War on Graffiti’s tactics presaged a generation’s experience of law enforcement and personal freedom. Mayor John Lindsay first declared war in 1972, and over the next 17 years, the city would spend three hundred million dollars attempting to run graffiti-free trains—this, during a period when the subway barely functioned and the city teetered on the brink of insolvency. Clearly, there was more at stake than aesthetics.

Those stakes become clearer when one examines law enforcement’s public profiling of graffiti writers. They were described as “black, brown, or other, in that order,” and vilified as sociopaths, drug addicts, and monsters. This was a fight over public space, and we would do well to remember that at the time the fight began, teenagers were also being arrested for breakdancing in subway stations, and throwing un-permited parties in the asphalt schoolyards of the Bronx. Taken collectively, these three activities also represent the birth of hip-hop, the single most influential sub-culture created in this or any country in the last half-century.

As historian Jeff Chang writes, the early 70s saw the politics of abandonment give way to the politics of containment in communities of color. The War on Graffiti is a prime example, and it midwifed today’s era of epic incarceration, quality of life offenses, zero tolerance policies, prejudicial gang databases, and three-strike laws. The War on Graffiti turned misdemeanors into felonies, community service into jail time. It put German Shepherds to work patrolling the train yards; Mayor Koch once suggested an upgrade to wolves. Today, the city prosecutes hundreds of graffiti cases each year, and maintains a dedicated Citywide Vandals Task Force. Nationally, writers have been sentenced to prison terms as long as eight years, and ordered to pay six-figure restitutions. In other words, the war rages on.

One cannot help but wonder what might have happened if New York City had agreed to the naïve, visionary truce those four teenagers offered, 30 years ago now. With a handful of scholarships and a press release, might the “graffiti plague” have been alchemized into a landmark public art program, to be adapted by other cities with the same zeal that zero tolerance has been? Could thousands of lives have been altered, hundreds of millions of dollars better spent?

We’ll never know, because the city didn’t listen to its young people then. It didn’t recognize graffiti as an outpouring of creativity and frustration, a simultaneous urge to beautify and destroy, to hide and be seen, that’s every bit as complicated as being shunted to the margins of the American dream. Kids are still writing graffiti today, beautifully and badly, in every city in the world; New Yorkers taught them how to do it, but they’ve always understood why. It’s not too late to listen to them now.

Adam Mansbach is the author of the #1 New York Times bestseller Go the F**k to Sleep and the novel Rage Is Back, available now from Viking. 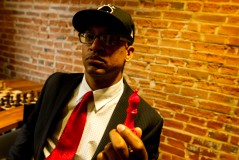 San Francisco, CA- Founder of the Hip-Hop Chess Federation (HHCF) Adisa Banjoko aka “The Bishop”, and All Tribes Chapter of the Universal Zulu Nation in San Francisco have joined forced to give away winter coats to teens.

“We will be giving away more than 50 coats that All Tribes collected as donations during the end of 2012” said All Tribes Minister of Information DJ Kool Dizzy. “We are using John O’Connell as a distribution point because HHCF told us that some of the kids here were coming to school in just t-shirts. The San Francisco Bay Area has seen some freezing temperatures over the last few weeks. We knew we had to take action.”

“I know the holidays have technically passed, but we see young people in need of warm clothing all over” said Adisa Banjoko of HHCF. “The Universal Zulu Nation has always worked hard to help kids and I knew they were working on a coat drive. I invited them to give the coats to some of the kids at John O’Connell and everything just came together. We hope those seeing HHCF and Zulu working together,  inspires other individuals and groups to work together and help people in their area. The strategy here is to keep kids warm, plain and simple.”

The coat give away will be Friday January 18th 2013 at John O’Connell High School and will be exclusive to the students of the school.