An interesting exchange between  CNN’s Piers Morgan and Alex Jones about gun control..Thoughts on this?

Jones was part of the crew of folks who created a petition to have Piers deported… As you watch this keep in mind, this is the same Jones that in Texas many Brown folks see him as a staunch anti-immigrant Nativist who promotes the offensive “Reconquista” conspiracy theory which has in many ways been fuel for far-right wing forces anti-immigrant militia forces.. In short Fear of Brown Planet…He expresses those sentiments HERE

Because he speaks on police brutality and will speak against certain types of government oppression, many have gotten sucked in believing he ain’t all that bad..Think again.. Here’s a few pieces  1) http://www.thomhartmann.com/users/political-fingers/blog/2011/05/alex-jones-neo-confederate-racist 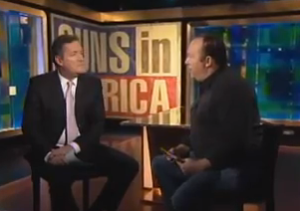