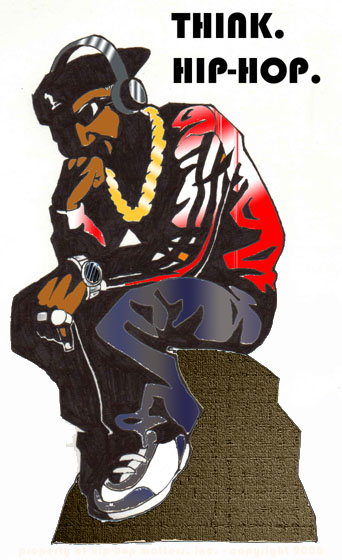 Global Hip Hop Battles, is committed to raising people’s consciousness, by sharing information through our post. Our goal is to empower and challenge the youth, to think far beyond their borders; that are often surrounded with an influx of negative images and messages.

We’ve made it no secret in the past, that we believe hip hop culture and the media, has become one-sided; with respect to messages and images being portrayed.

If you take a look at hip hop and the media twenty-years-ago, you can see there was more balance, in regards to the images and messages being displayed.

Music of this era included artist such as Queen Latifah, and Public Enemy, and Big Daddy Kane, just to name a few.

While, television at the time included shows like The Cosby Show, A Different World, Living Single, and BET’s Teen Summit to name a few.

And while these artist and television shows, were different with respect to their music and programs, they seemed to always be dedicated to making sure they worked to raise peoples consciousness; especially young people.

Fast forward to 2012, and we’re living in a time where the messages and images don’t seem as positive. Instead, the majority of the images and messages seem to be anything, but empowering.

It seems as though we’re living in an era, where mass media floods the market, with a barrage of negative stereotypical images; that work against helping to build and repair urban society.

For example, television shows like Love and Hip Hop Atlanta,as well as several websites, seem to fuel this stereotype, by portraying Black men and women in a very negative light. They seem to perpetuate the pimp and ho’s mentality, by glorifying these images.

Now we’re not saying that television shows and websites  shouldn’t have the right to promote what they desire, we’re simply saying there needs to be more balance, with respect to the images we see. Often times, those negative images have the potential to cloud people’s judgement.

For example, when speaking with a friend, who’s a Black woman, and a business owner, she explained that people expect her to behave like the woman on these reality shows, when brokering business deals. She also indicated that she has to spend time reaffirming herself to potential clients, in order to be taken seriously,during business transactions.

The current cultural climate seems to have accepted this behavior as being normal, which seems to have caused  the respect level for Black men and women, to depreciate greatly.

In addition, many of the current hip hop artist, aren’t helping the matter, using the term bitches and ho’s loosely, and glorifying the pimp culture; to the degree that it’s become apart of the everyday vernacular.

20 years ago, it wasn’t culturally accepted to be a “bitch,”  “pimp,” or a “ho” In fact, many of the artist made the choice to stay away from those stereotypes, to offer an alternative in hopes of empowering Black men and women.

A prime example is from hip hop legend Big Daddy Kane. During TV One’s Unsung series, Big Daddy Kane said that he wasn’t raised to call women bitches and ho’s, “that’s not the way I was raised, my moms didn’t raise me that way” said Kane.

Therefore, his music encompassed his morals and he refused to waiver. He took responsibility and seemed to approach his position, as an artist with a sense of purpose.

Queen Latifah also made it clear in her 1993 song “Unity” where she spoke out against being disrespected. This seems to have worked to make women demand respect, during times where they felt disrespected.

Somewhere over the past 20 years, however these messages of empowerment, and respect were exchanged for disrespect, and degradation of the Black community.

The portrayal of men and women in hip hop and the media, is just one facet of the issues, another problem seems to be with lack of uplifting and informative messages; both on television and in the music.

While there are a handful of artist, who do concentrate on bringing empowering messages to people. They seem to often be over-shadowed by the negative messages and images.

The iconic hip hop group Public Enemy, spoke out against the injustices plaguing urban communities in songs like “Fight the Power;” which served to raise awareness about these issues.

In 2012, most of these issues remain to be the same, yet few seem bold enough to speak up. Instead, the culture seems to be saturated with messages that only further work to dis-empower people.

An example on television, is BET’s Teen Summit; which was on the air during the 1990′s. Teen Summit, took real Black teenagers, and gave them a forum to address issues including sex, violence in communities, applying to college, and money matters to name a few.

In addition, sitcoms like “The Cosby Show,”  ” A Different World,”  “Living Single,” worked to empower people. For example, many of us who grew up watching “A Different World,” were inspired to attend colleges and universities, as a result. That’s the power great programing can have on people, if  it’s offered.

In 2012, BET does not offer a program that’s dedicated to addressing issues young people face, and giving them information aimed at empowering them. In addition, there are few sitcoms on television, due to the influx of often reckless reality shows.

Now as we stated earlier, we understand that there’s a time and place for everyone and everything, what we are simply saying is, there needs to be better balance with respect to images and messages; if we want to properly move into the future.

Young people are impressionable, and if they are only exposed to poor images, then that’s what they’ll become. We owe it to our communities and ourselves to bring more balanced images to the forefront, and help to empower the youth.

Let’s all make a conscious choice to bring balance to our culture. If you know better, then do better!

Google is gearing up for a debate on hip hop titled versus debate. It’s scheduled to air live online, and will feature the legendary KRS-One, ?uestlove, and Rev. Jesse Jackson, to name a few. In the debate/discussion they will ask the following questions:

Is hip-hop the authentic voice of the oppressed that turns anger into poetry and political action? Or is it a glorification of all that holds back oppressed minorities and hinders them from mainstream assimilation?

10 comments on “Niggery: When Will The Buffoonery & Coonery End? by Global Hip Hop Battles”