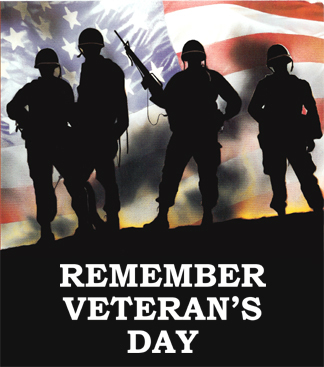 November 11 2012: Today is Veterans Day..It’s a day where we take time out and honor all those who’ve served in the military and basically thank them for their service and sacrifice… I think its important we thank those who’ve served our country, but our thanks should go beyond a handshake, a pat on the back and a parade.

How about we say thank you to our men and women in uniform by making sure they have healthcare and proper benefits that are not caught up in Congressional red tape or attached to some draconian pork belly provision by an overzealous lawmaker trying to score points and using the military as a shield or political football?

In other words, there should be no homeless Veterans, but there are plenty, I see them all time and all over. There should be no joblessness amongst our Veterans but today we have close to a million who have no job. There are some in the Senate who who will attend Veteran Day parades, but won’t sign a bill that’ll put a billion dollars into a Veterans job program..You can read about that HERE

There should be no substance abuse amongst our Veterans. Sadly its pervasive amongst those on and off the battlefield. There should be no mental health challenges amongst our Veterans but thanks to our collective refusal to own up to this happening and put in place proper resources to help those who are ailing, we now have that as a challenge. Veterans committing suicide have now surpassed those we lost in combat . You can read about here in the NY Times.

How about we thank our troops by removing them from having to make sacrifices due to unnecessary war and conflict? We should have our troops here at home or around the world skilled in true humanitarian missions of providing food, shelter and clothing during natural disasters, not doing ‘humanitarian’ efforts as defined by unwarranted regime change where soldiers are forced to serve 4 and 5 tours of duty with the only real beneficiaries being big multinational corporations connected to the military industrial complex that pushed for it.

There are those who have served our country who have come to recognize that their sacrifice and skills sets were being dishonored and misused by those in power. There are veterans who have come to recognize that they were in foreign lands because of lies. As a result they have  stood up and spoke out. These men and women have recognized that they weren’t fighting for freedom, but instead fighting to secure resources and score political points that would be only helpful to the global 1%. Those troops who recognized this misleading effort and stepped up and called foul, really deserve our thanks.

We thank those men and women who served, who kept it 100, even if it meant being discharged, ostracized or jailed..These men and women made the sacrifice to keep their humanity in the forefront and speak out when they saw injustice or monstrous behavior being done in our name. We should thank those who have been willing to blow the whistle on us breaking international law for committing horrendous acts like torturing prisoners, committing acts of rape or discounting the humanity of those they fought. We honor those who put down the gun and sword and picked up the dove and threw up a peace sign because they recognized that war is not always the answer..

Hip Hop artists have been on fire as of late. It seems like everyone is stepping up their game and making music that passionately speaks truth to power… One song that should not be overlooked is a brand new joint from Public Enemy called Ice Breakers.. It’s off their new album ‘The Evil Empire of Everything‘. This particular song addresses the issue of mass deportations and what its like for those who are living in immigrant communities and are literally being hunted by I.C.E.

The song features searing lyrics from Chuck D where he raps:

I KNOW A SILENT NATION IN DISLOCATION
FRUSTRATION FROM LEGISLATION
LED TO DEMOGRAPHIC IN ISOLATION
ANOTHER PARTICIPATION IN DECAPITATION
10-4 DIE RIVER DEEP MOUNTAIN HIGH
IS A WALL STUCK BETWEEN DYING AND DOING TIME
CANT IGNORE SMACK DAB BORDER WAR
AS THE BEAT GOES ON, WORDS FLOWED ON
I CAUGHT THE LAW
PYRAMIDS MACHU PICHU
THINGS THEY DONT TEACH YOU
DONT APOLOGIZE
YOU WERE HERE FIRST ON THIS EARTH
BEFORE THESE MILLENNIAL �COWBOYS CLAIMED THEIR TURF
NOW WHOS 1000 MILES AND RAN
DESERTED IN THE DESERT
WILD WILD WEST HURT TO THE DIRT
ANTI IMMIGRATION
AGAINST BROWN SWKIN
SOUNDS LIKE BROWN SHIRTS
SILENCED BY SO CALLED LEGAL VIOLENCE
SOMEBODY HAD PERMISSION
TO PUT HUMANS IN THIS CONDITION
THIS LAND IS WHOS LAND??
THEY MUSTVE FORGOT
KICKING THE BLACK IN THE ASS
WHILE KEEPING THE BROWN OUT
THIS ONE SIDED LAW MAKES ME SCREAM AND SHOUT

Chuck is joined  by The Impossebulls, Sekreto, Kyle Jason & True Math who all come with heat both in English and Spanish..Its good to see a group like PE keep it 100 when it comes to issues of the day..

ICE Breakers is actually the second song they did on the topic of immigration, when Arizona passed the anti-immigrant SB1070 law the group did a song called Tear Down That Wall ..Looking forward to peeping the video..for this new song… 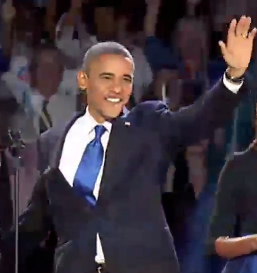 With the re-election of President Barack Obama, we been having a series of discussions on Hard Knock Radio with key activists and organizers all over the country about the next steps we should be taking. This is an important conversation considering how concerned and dissatisfied many were feeling in the weeks and months leading up to the 2012 election.

Many felt President Obama had come up short on a number of issues and was dreadfully wrong on others. Many who felt things weren’t headed in the right direction were cautioned that we should give the President time to get his bearings. We were told he inherited a tremendous mess and that change would not come overnight.

We were also told that President Obama was under tremendous pressure from his political opponents who were determined to limit him to one term. The type of obstruction Obama was up against in Congress was unprecedented. he amount of racism directed at him was unprecedented. Hence activist and organizers were encouraged to fall back and rally around the president with the goal of shielding him and getting him a second term.

That has finally happened the other night. In the aftermath of his re-election there should now be strong pushes for him to address issues of poverty, the plight of labor, ending the war and other imperialistic foreign policies, deading mass deportations and eradicating the ramped up domestic spying and erosion of constitutional rights via NDAA.

As Boots Riley of the Coup famously pointed out not too long ago, our vibrant movement for social justice where many of these key issues were being addressed and fought for long before Obama was even a presidential candidate somehow became morphed into a movement to get him into office. That was good for Obama but not necessarily good for the movement. The momentum garnered over the past 8 years should not have dwindled  It left us short-changed.

This time around, many are re-thinking, re-tooling and laying out plans of action for the next 4 years and beyond. Many activists are determined not to make the same mistake of jettisoning their respective movements for the sake of an elections. Others are determined to keep themselves and the people around politically engaged beyond 2 and 4 year contest. Still others are finding that its time to build from the ground up, by establishing strong local basis that can withstand any sort of national political storms.

One of the people we interviewed a day or so after the election is Michael Skolnik who is editor and chief of Global Grind, which is an online publication owned by Hip Hop mogul Russell Simmons. Skolnik was also a surrogate for the Obama campaign.

During our interview we covered a range of topics including how to hold this President accountable to why we didn’t see more young people who voted in overwhelming numbers having visible seats at the table.

We discussed some of the problems that many had with Obama on key issues and what would be the best ways to push him and not get be obstructed by supporters who were over defensive.

We also talked about long term strategies and what we should be striving for during Obama’s second term. Skolnik offered some great insight and suggestions Peep the Hard Knock Radio interview below. Let us know what you think…

We also spoke with long time Hip Hop activist and former Green Party vice presidential candidate Rosa Clemente. Rosa has long been pushing that the Hip Hop  generation move away from constraints of the democratic party and adopt a more radical and uncompromised politic. She feels Hip Hop has become too much of a mouthpiece for the democrats and has lost a lot of its bite and overall integrity, especially when it remains silent and actually cheerleads a president who embraces policies that Hip Hop folks have long stood against.

She talked about the importance of us focusing on younger voices, creating space for many who have been locked out and highlighting the work of on the ground organizations like the Malcolm X Grassroots Movement who never stopped organizing and pushing even with Obama in the White House.

Clemente noted that there’s been a pressure to vote over organizing and its led to folks believing that’s the only thing needed to be politically changed. This has been too much of an oversimplification in addressing systemic and complex problems and that perspective needs to be changed. With the re-election of Barack Obama, Clemente sees opportunity for endless possibilities for great change. She notes, the focus can now return to us  resolving our issues vs getting someone re-elected.

Rosa concluded our Hard Knock Radio interview by sharing her personal vision for change during which includes stepping up and strengthening the Green Party. .. Click the link below.