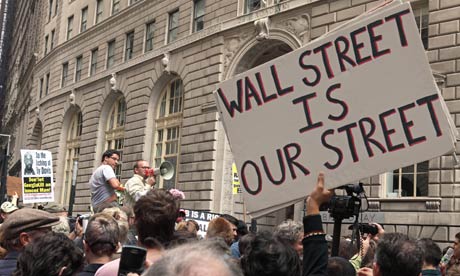 One year ago September 17th 2011, a group of people gather at Zuccotti Park a small enclave in the financial district of New York City and launched a movement that would effectively change the way we would for the foreseeable future talk about economic disparities. Occupy Wall Street (OWS) was the movement that would eventually spread to over 1500 cities around the world and force presidents and economic advisors of any stripe to talk about the economy in terms of 1% vs 99%. It was a game changer on many levels.

Occupy Wall Street was a huge attraction … Zuccotti Park was the epic center where everyone from filmmaker Michael Moore to scholars like Cornel West to music moguls like Russell Simmons to former Black Panther Angela Davis to major labor leaders and members to students all came by to embrace what was going down.. In spite of the initial media blackouts, OWS exploded as it struck a chord. Hundreds and then thousands showed up to protest what many described ‘the Tyranny of the banks‘. 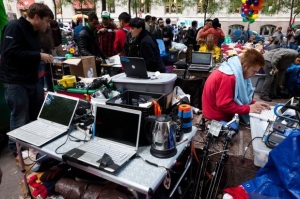 OWS had a tech savvy media center set up, which included a live U Stream so the entire world could watch, as this movement did what many thought was impossible, give folks who were feeling beleaguered, cynical and betrayed by the broken promises and lack of action around the Hope and Change rhetoric that excited so many in ’08, a sense of purpose and belief in the possibility that serious corners could be turned. OWS struck a chord with many who had deep yearnings to shake things up and change the world. The ‘leaderless’ movement seemed determined to bring the fight and the mass anger many were feeling, right to the front steps of Wall Street big wigs..It wasn’t long before lots of money and resources began to pour in..

t also wasn’t long before we started to hearing and then seeing incident after incident of New York City police beating down Occupy protestors. Mayor Michael Bloomberg once famously called NYPD his private army and sadly they lived up to the billionaires claim. With each march and with each protest the world was treated to seeing NYPD, many wearing white shirts punching, macing and using batons on women, men, young and old.. The arrests were fast and furious. It would be 5 here, 6 there, 10 there. One day over 700 were arrested with many beaten as OWS attempted to march across the Brooklyn Bridge. It was later learned that Wall Street institutions like JP Morgan donated 4.6 million dollars to NYPD which led to the belief that they had essentially privatized parts of the department. Many of these white shirts were answering to bankers and not the city.. 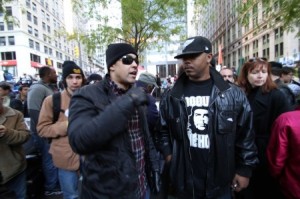 As we look back on all that transpired since Occupy Wall Street began we talked with Malik Rashaan.. who started Occupy the Hood. He explained how he showed up and showed up at Zuccotti Park on day two, curious as to what all the commotion was all about and anxious to see how  many folks who looked like him were participating. Not seeing all that many, Malik started Occupy the Hood and maintained a strong presence down at Zuccotti..

During our interview, Malik gives an insightful, brutally honest assessment of what he experienced. He talks about the early growing pains as well as the strengths of OWS and its short comings.

He recounts the early days of OWS and explains whether or not he feels it lost focused..He goes into detail about the struggles around race, gender and class.. he talks about the intense debates around strategy..He said there were many fault-lines and many egos..Malik describes OWS as a church, where everyone comes but the pastor and many in the congregation don’t do the right things..

He also talks about the myth surrounding OWS being leaderless.. He weighs in on the Jay-Z- Russell Simmons controversy where Jay-Z called OWS Un-American. Malik talks about how cats from the hood perceived OWS especially after he brought them to Zuccotti.

Malik talks at length at some of the many things OWS accomplished and where he sees things headed..He talks about the new approaches he sees many Occupies taking. He also talks about the strength of of Occupy in other cities.. Oakland and Detroit are two that come to mind..