Looking back 11 years ago at the 9-11 Terror Attacks, its sad to see the assaults against innocent people in America didn’t stop with those planes crashing into the World Trade & the Pentagon…

I recall that fateful day, how our heart went out to first responders like those brave officers in NYPD who lost their lives.. We embraced them and held them up high and gave them all that they needed to protect the city. 11 years later we have come to see how NYPD took their newly granted powers and use in the most vicious ways against fellow New Yorkers..

We’ve seen NYPD under the guise of ‘fighting terror’ use tactics like Stop and Frisk resulting in them inconveniencing and often times absolutely humiliated close to 700k people last year alone.. Under Stop and Frisk we’ve seen over 85% of those stopped being young Black and Brown males with less than 1% of any weapons found or folks being detained being in violation of any law..

We’ve seen the NYPD do unprecedented amounts of spying on innocent people, mainly Muslim Americans and in particular Muslim students creating a climate of fear, intense Islamaphobia and hatred toward fellow citizens who also lost family and loved ones in those horrific attacks..We seen that play out last year with the proposed building of a mosque near Ground Zero.

Congressional reps like Long island’s  Peter King amped up fears and even held hearings accusing Muslim Americans of being possible terrorists who should be investigated. That same Peter King has been relatively silent during the recent rise of domestic terrorist incidents executed by non-muslims including the recent mass killings of Sikhs in Wisconsin. We now see NYPD ready to unveil a new domestic spying program called Domain Awareness Surveillance that makes Stop and Frisk look tame in comparison. 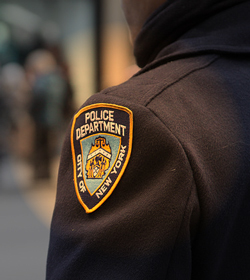 After the Terror Attacks, NYPD garnered our sympathy only to turn around and become an outfit that was described by Mayor Michael Bloomberg as his own  ‘private army’… We’ve seen NYPD become a private army for Wall Street banks like JP Morgan during the Occupy Wall Street Movement, where it was revealed that NYPD was put on JP Morgan’s payroll. The end result was the entire world bearing witness to the countless beat downs administered by white shirted police  against those who were protesting economic disparities attributed to those Wall st financial giant.

11 years after the 9-11 Attacks we’ve seen NYPD become a terror organization in the lives of African-Americans The recent explosive, Extra Judicial Killings of Black People by Police Report put out by the Malcolm X Grassroots Movement shows every 36 hours an African-American is killed by police all over the United States. New York City, followed by Dallas and Atlanta is leading the charge in cities where Blacks are likely to be killed by police. From the killings of Sean Bell to Ramarley Graham, many have claimed NYPD has sparked more fear in Black and Brown folks than Al Qaeda ever did.

Renaldo Cuevas was shot and ‘accidentally’ killed by NYPD

In spite having intense training and unlimited resources, we’ve seen in the past month NYPD shoot 10 innocent civilians including Bronx Bodega worker Renaldo Cuevas who was killed by NYPD after he fled from robbers inside his store. His killing was the latest in a long line of recent wrong doings by this once lauded law enforcement agency. Among the most glaring involve NYPD officers Michael Pena and Arthur Roland both accused of rape in separate incidents this year. The biggest irony is seeing how former NYPD commissioner  Bernard Kerik who was  deemed a hero during 9-11 was recently sentenced to 4 years in federal prison. Go figure.

11 years after 9-11 we’ve seen the War of Terror turn on people here in the US who dared protest and question the government over a variety of grievances ranging from misguided war efforts in places like Iraq to illegal drone strikes to pre-emptive strikes on foreign soil to renditions, torture and other atrocities we once considered war crimes that needed to be vigorously prosecuted when executed  by others..We’ve even seen the passing of laws like the NDAA which allows American citizens to be stopped and indefinitely detained anywhere in the world. Since 9-11 we’ve seen American citizens killed on foreign soil thanks to our governments secret  ‘kill list‘. We won’t even talk about the rise of private prisons and detention camps throughout the US where many are finding themselves placed.

During the 9-11 Attacks we realized that the World Trade was attacked because it was near Wall Street and it represented the financial arm of this country.. We felt bad for those close to those banking institutions and embraced them in solidarity.

11 years later we’ve come to find that since 9-11 many of those financial institutions went and deliberately crippled the economy, causing 1 out of 7 people to be plunged into poverty while they made record profits and got away with millions of questionable and illegal foreclosures. Many describe what these Wall street bandits did and continue to do to millions of Americans and innocent everyday folks all over the world as ‘economic terrorism‘…Many of those who head up these institutions have acted with reckless abandon, never once showing any remorse and justifying highly unethical behavior as them simply doing ‘good business‘..

After 9-11 the entire world looked at America, embraced us and shared in our pain. Many helped us get back on our feet only to see us turn around and embrace foreign policies resulting in the US being seen as a super power that routinely commits acts of terror all over the planet. Talk to those innocent families in Pakistan, Somalia and other countries who’ve been terrorized by our drone strikes.

Since 9-11 the ‘War on Terror‘ has become a money-making venture for those connected to the military industrial complex vs a defense operation designed to keep us and the rest of the world safe from harm..

9-11 itself has become a political backdrop where all sorts of lawmakers evoke the events of that day to affirm a twisted notion of patriotism resulting in them grandstanding and erecting all sorts of Draconian laws from the Warrantless Wire Taps to the infamous Patriot Act which have put severe restrictions on our freedoms vs opening them up. Thank God during this year’s 9-11 commeroration, politicians will not be allowed to speak.

9-11 has become a rallying cry for loud mouth media pundits to beat the drums of war and question the patriotism of others who dare suggest that we find less combative ways to protect our shores, while never once donning an outfit and volunteering themselves to be on the front line of any other military outfit. Some of those pundits while evoking 9-11 to show their patriotism, were leading the charge to prevent those from getting proper aid and resources from those who suffered and continue to suffer from disease and other illnesses including certain types of cancer caused by the debris of that attacks. They cited austerity measures and ‘less government’ as the rationale. After 11 years of intense political infighting under the recently passed Zadroga Act, 9-11 cancer victims will get some relief.

Meanwhile we still have other pundits like Ann Coulter who still stand by their vicious demonization of 9-11 widows, as illustrated in this infamous quote from her one of her books..

These broads are millionaires, lionized on TV and in articles about them, reveling in their status as celebrities and stalked by grief-arazzies. I have never seen people enjoying their husbands’ death so much.

Today we should take time to reflect on those innocent lives lost 11 years ago and do a bit of soul-searching, questioning the direction this country has taken on our collective watch..Let’s make a commitment to really end terrorism..lets end the terror we are heaping on each other for political and monetary gain.

As you keep in mind some of what was written, I encourage you to read this excellent article from David Rosen that focuses on the growth of what he calls the police-corporate surveillance “complex” You can read that article HERE