Long time activist, Freedom Fighter and original LA Gang member (Slausons) Ron Wilkins gives an excellent and insightful breakdown of the ‘gang’ phenomenon. He digs deep into some of the pressing issues around self-hate and cultural disorientation… definitely some words grow on.. -Davey D- 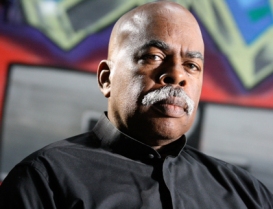 The “gang” phenomenon among black youth can be attributed to three principal causes. Without a political decision from society’s rulers to forthrightly and comprehensively address these causes or pillars which initiate, fuel and sustain the growth of “gangs” and their resulting carnage, the problem will worsen.

The other force capable of resolving this crisis, and unquestionably the most significant one is our youth themselves, the street toughs who have been recruited into the “gangs”.It will require that they commit to reclaiming themselves as conscious African people and forging themselves into community builders and assets rather than continuing on as self destructive self haters, predators and liabilities.

The most damaging of the three causes, and perhaps the least understood, is deeply rooted self hatred which arises from persons of color being dominated by whites and their culture in racially oppressive societies. In every conceivable way social institutions in these societies promote and/or glorify white values, conquests, interpretations of spirituality, heroes, beauty standards, holidays, military campaigns and perceptions of other peoples in the world. These same social institutions cast Africa and her scattered populations as an inferior, uncultured, unattractive, unsuccessful and subhuman species. The practice of labeling black people as inferior is reinforced daily in school classrooms, television programming, church gatherings and other social activities. On the big screen and on television most black figures are villains, comedians, athletes, gangsters or losers in some form or another. The places that black people call home are routinely characterized in the media as poor, run down and unsafe. The African roots of Christianity are ignored, and a whitenized Jesus is promulgated to symbolize a white savior and god, even though Christ did not come out of Europe. From kindergarten through to university education curricula the enormous contributions of Africa and her people to world history are routinely
overlooked, trivialized or misrepresented.

The net result of these cumulative experiences cause black youth to suffer horrific psychological damage which compel them to accept white characterizations of them as inferior. So much so, that they want absolutely nothing to do with Africa. Overwhelmed by the onslaught against their humanity as African people, its victims (black youth) unconsciously turn upon themselves in a desperate effort to destroy the negative representation. Failing to understand that their being disregarded,devalued and hated by white society is but a calculated move to turn them against themselves black youth unconsciously set out to destroy one another. The black youth who beats down or shoots another black youth has become so maladjusted psychologically that he has internalized this hatred and does not realize that the “rival” who he now devalues, hates and is determined to destroy is in a very real sense himself. The moment he shoots at another black youth who he regards as an enemy he is actually firing at a mirror image of himself. Threatening gestures and violent actions, identical to the behavior
of male combatants is also engaged in by young black females and for the exact same reasons.

Perhaps the most glaring display of psychologically maladjusted black girls and women, whether “gang” affiliated or not, are the extremes to which they go to alter their hair. The majority of them in every continent have become so ashamed of their natural kinky hair that they invest considerable time and spend exorbitant sums of money to change its appearance. Out of desperation they burn and straighten it to disguise themselves and to more closely resemble white females. They buy wigs and weaves, put dangerous chemicals in their hair and undergo expensive procedures to have “perms”. Black parents buy white dolls and backpacks emblazoned with images of Hanna Montana and other white idols for their daughters. These expressions of self hatred are the actions of mentally colonized people who are in dire need of knowledge of their own achievements and greatness which can then enable them to reclaim and celebrate themselves. Oddly enough, the doll experiment which was conducted by psychologist Kenneth B. Clark in the 1940’s and repeated by Kiri Davis in 2006 with
the same outcome underscores my point. When presented with both black and white dolls and asked which one they liked most, almost all of the young black girl subjects in both experiments selected white dolls.

“Gang” formation, affiliation and rivalry are both alien and contrary to African custom. Black youth who have evolved in western societies are generally cut off from knowledge of African history and customs, deprived of an orientation to African ways of being and behaviors and become culturally disoriented. In the words of the late distinguished historian Dr. John Henrik Clarke, “When people oppress you they take away the memory of what you were before they interrupted your society”. While early African societies were not perfect they were more human oriented and relations among and between people were not characterized by conflict and violence such as what exists in our communities today. If the African way of life and the African personality were understood and appreciated by present day African (black) youth, “gangs” and “gang conflict” would not exist. In early African societies relations between people were governed by honor and obligation. The other person was a fellow human being and it was on that basis that you were obligated to not be unfair to or do harm to him
or her. You thought too much of yourself than to lie, cheat, steal or injure him or her and bring dishonor upon yourself, your family, your clan and your tribe. African people practiced collectivism, in that we cared for one another and shared what we had with others in the community. There were humane relationships between women and men and women were not degraded. When a man took a wife there was an expectation in the community that she would be well treated and not beaten and abused. Women were revered as life givers; many societies were ruled by women and men did not feel insecure under their leadership. There was no prostitution and men did not abandon their families. Children were expected to treat elders with respect. Among the time honored African sayings, are these; “Where there is no shame, there is no honor”, “Virtue is
better than wealth”, “It takes a whole village to raise a child”, “If I stand tall, it is because I stand on the shoulders of those who came before me” and “The grateful man earns for himself yet another kindness”. African youth in every part of the world have a right and a responsibility to know their history and customs so that they can re conceptualize and reclaim themselves as members of the African family.

“Gangs” flourish in class societies where human priorities are lacking, large sectors of wage earners who are in need of work are unemployed and underemployed and the leadership has not advanced far enough to address social injustice and income inequality. If the rulers in these societies lack the imagination and initiative required to create meaningful employment for those without work, then they are obliged to locate and bring on board those persons who can make it happen. For starters, potential “gang” members and those who have transformed themselves must be provided with opportunities to earn income to support their families and themselves. Their representatives must be included in society’s decision making structures in substantive and meaningful ways. The society must reorder its priorities so that its young black men and women see it as their responsibility to make positive contributions to its peace, growth and development..

The three principal causes or pillars which initiate, fuel and sustain the growth of “gangs”, self hatred, cultural
disorientation and poverty must be properly understood and acted upon now, tomorrow is too late!

Got a chance to build with Hip Hop legend Big Daddy Kane who is on his way to San Francisco this weekend to perform at Yoshi’s Jazz Club.You have to marvel at a guy who’s been putting in work since 1986, when Kane first hit the scene as a member of the Juice Crew and still manages to keep himself and his music relevant 26 years later…

In our interview we talked about his longevity in Hip Hop.. Kane explained it was always his intention to stand the test of time. He noted he never approached his music or any of his performances in a lackluster way. It was always about leaving a lasting impression and having folks one day wanting to mimic everything from his rhyme flow to his overall steeze.

I asked Kane why he never took his music career into acting the same way many of his peers had. Kane was often dubbed the leading man of rap aka Dark Gable, a play upon the famed actor Clark Gable. He also was dubbed Blackanova a play upon Casanova. Kane said he was open to doing more acting, he just hadn’t been offered good roles. At the same time he noted he hadn’t pursued things as hard as he could. Nowadays he’s open and wants to step into the acting arena and really give things a try..Thus far kane has appeared in movies like; Posse, Meteor Man, Dead Heist, Brown Sugar and Gunmen.

In terms of music, Kane explained, that he’s been working with singer Showtyme, who we know for the work he does w/ Pharoah Monch.. They have assembled alive band are currently working on an album. Kane didn’t say when it would drop, but noted they were putting down the finishing touches.

We also talked about the art of freestyling vs writing a good song. Kane explained that a true emcee takes time to create pictures and those pictures get perfected when you write. There’s no getting around it. He noted that the term freestyling initially meant to rap without form, meaning that you may touch upon a variety of subjects in song. he explained that song like Raw was him freestyling. The term ‘coming off the dome’ meant spitting rhymes on the spot. He said its a good when doing a show and you forget a lyric and have to change up for a few bars, but ultimately an emcee takes time to craft vivid pictures. Coming off the dome doesn’t allow that with any sort of regularity

We concluded our interview by talking about Kane’s favorite song.. He went into detail explaining why Set It Off was his best work. He noted he was trying to mimic James Brown‘s sex machine..