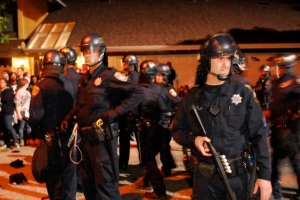 This is the latest drama going down in Oakland… Police stopping two innocent men at gun point who they claimed ‘fit the description‘ … This sort of harassment has gone on for as long as we can remember.. When I saw the video what immediately came to mind, was a young 2Pac Shakur who was stopped in similar fashion not too far from that same area 20+ years ago by OPD.. Sadly Pac didn’t have the advantage of a Youtube, folks with cell phone video cameras and twitter to get the word out.. He wound up getting severely beaten..

Police rolling up on folks is not an aberration but part of a long-standing unwritten procedure pioneered by LA Police Chief William H Parker where police were encouraged to make their presence known and felt by young Black and Brown males at a young age so they would know who ruled the streets. That was damn near 50 years ago and since then we’ve seen things get exponentially worse. From Stop and Frisk in New York where incidents like the one shown happen over 680 thousand times a year to the ‘Jump Out’ routine which is what we see here in this video..

It’s incidents like these that often go unreported but lead to the anger, unrest and the weekly protests (FTP Marches) that happen weekly. It’s these types of incidents that result in the city of Oakland having to shell out a whooping 58 million dollars in brutality and harassment settlement over the past 10 years..

Here’s how the video poster described the scene

these young men strolled past me casually having a conversation before the Oakland Police Department clearly racially profiled them as they “fit the description” but were released right after the incident. Now if they had the info to release them, why on earth did they feel like pulling live ammo out on a public street in the middle of the day, right in front of a cafe? NEWSFLASH OPD all BLACK MEN ARE FUCKING CRIMINALS!