So President Obama is in town-Oakland, California. He came in last night and will be at the Fox Theater later this evening for what will be one of 3 fundraisers…I find it ironic that Obama would come to Oakland to raise money from our good citizens while his US Attorney appointee Melinda Haag has run roughshod over Northern Cali, directing federal agents to shut down state and city sanctioned medical marijuana facilities. Her actions run in stark opposition to what Obama and his Attorney General Eric Holder had said they would not do when they came trouncing around Oakland looking for money and votes back in 08.. So while Obama gets money from us..the city is now struggling to make sure the second largest contributors to its tax coffers are not permanently closed..

When Obama comes to speak tonight there will be a rally and protest starting at 12 noon.. you can get the info here..

When Obama comes to the Fox Theater tonight, it’ll be interesting to see he addressing the rampant police killings of unarmed civilians taken place up and down the state. From Oakland to SF to Vallejo to Stockton and now Anaheim. Over the weekend, we saw the outrage in Anaheim around the killing of Manuel Diaz and out of control police setting dogs on mothers and kids.. What took place in Anaheim was the second unarmed man killed by police in a week..Thus far this year, the city which is home to Disneyland the Happiest Place on Earth, has seen 7 civilians killed by APD.. The Happiest place on Earth.. More like the most Trigger Happy place on Earth.

We’ll see if Obama addresses these shootings or the recent ones in Oakland including ones involving Alan Bluford, Oscar Grant, Raheim Brown, Derrick Jones, especially since several of these cases have requested investigations from his Attorney General..With one African American being killed by police every 36 hours, folks in oakland are very aware of the problems with police.. I wonder if he’ll address the grief folks are feeling or if he’ll shower praise on a troubled OPD which has had to pay out close to 60 million dollars in brutality settlements over the past 10 years, and try to appeal to their union  I’m asking this in the context that OPD has been training Mexican Federales on how to deal w/ drug cartels.

In an area with large immigrant population, How will Obama address the record number of raids that have impacted both Latino and Asian communities here. In spite of us being a Sanctuary City, it has not stopped ICE from showing up here and breaking up families. Yes, we know, Obama made his recent gesture toward immigrant families by saying he isn’t going after young people, but what will he do to restore those families that have already been broken up? When he came in 08, he got everyone hyped by talking about how he was gonna push for comprehensive Immigration reform.. 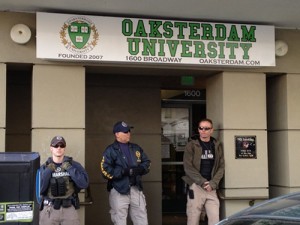 In an area that filled with over 10 colleges and universities, wonder if Obama will address huge student debt and pending budget cuts directed at students.. It’ll be interesting to see what sort of inspiring message he gives the youth in Cali who have provided him a solid Blue state.. These young voters got out and gave him  a bunch of key congresspeople, 2 US Senators and a Governor he should be able to work with.. Those who voted for him in Cali did their part what will he do for them?Will he aggressively push for the Millionaire’s Tax? Will he direct new legislation or issue some sort of executive order to help stem rising tuition costs?

Lastly we have the issue of foreclosures.. Cali especially the bay Area has seen them massively impact folks, especially in Brown and Black communities. Yes, we know Cali AG Kamala Harris reached a deal with the banks that was ion fact better than most, but we should not forget that she had intense pressure from the White House to settle, in the meantime we still have folks out on the streets.. What does Obama say to them tonight? What does he say to Oakland, knowing the type of stranglehold his buddies at Goldman Sachs have had over the city which is directly and indirectly forced us to close schools  and give up other resources.. Some of the main opponents currently fighting Goldman Sachs are Black churches, which are a key voting block for Obama in Oakland..You can read about that HERE

Should be an interesting evening in Oakland w/ Obama in town..