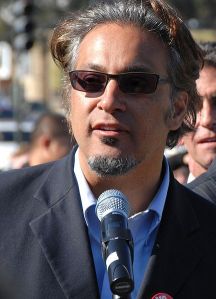 The domestic violence case involving newly elected SF Sheriff Ross Mirkarimi and the all out efforts to remove him from office is an interesting one that raises a bunch of questions on a number of levels. Is this a political witch hunt or a concerned group of politicians showing zero tolerance for domestic violence and unethical behavior by the sheriff, law enforcement and public officials in general?

Such questions are asked from the standpoint of watching the  Ethics Commission meet today to determine what procedures will be followed during Mirkarimi’s upcoming hearing and seeing how SF Mayor Ed Lee over the past couple of months has gone all out leaving no stone unturned in his dogged determination to remove Mirkarimi from office.

We’ve heard Mayor Lee say things like; He has ‘concern for public safety‘ and he wants to ‘restore the public trust‘.. Ok,we can all get that.. very few would disagree.

So one has to wonder why such determination isn’t shown when the police do things like brutalize and shoot its citizens in highly egregious and questionable circumstances?

We didn’t see Mayor Ed Lee go all out when Kenneth Harding was shot and left to die over a $2 bus transfer last summer?  Hundreds of people came out to confront the police over that shooting. Scores of witnesses said it was unjust  yet,  we didn’t see the Mayor try to restore public trust in that situation..For that matter there have been scores of demonstrations in SF around the issue of police misconduct, many of them much larger and more widespread than anything around Mirkarimi, yet we have never seen this type of fervor to correct wrong doings and restore public trust

It was just two years ago we saw how SFPD was rocked by one of the largest scandals in the department’s history. Here we saw over 50 felony cases get overturned thanks to unethical behavior by cops who falsified reports and may have planted evidence on folks., yet we didn’t see all the stops pulled out around that.. We didn’t see procedures to remove the chief or any other supervising officer for allowing that to go down on their watch..One has to wonder why.. 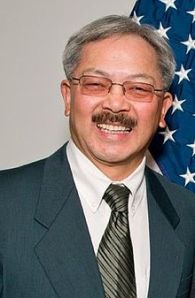 Even if there are rules in place that hand tied  Mayor Lee, one still might ask why didn’t we see him simply  express anger and disdain the way he’s done around the Mikarimi situation?

Is this a case of politics? We know that Makarimi a former SF Supervisor and co-founder of SF Green Party,  has long been one of the more progressive voices in SF politics. He’s well-known and well liked. When he was running for sheriff he talked about how he would be one help out homeowners and not the banks when it came to foreclosures. If anyone could start the process of changing the inner workings of law enforcement and moving it in a decidedly more progressive direction, it would be Ross Makarimi.

Needless to say his run for Sheriff attracted a lot of attention and gave folks hope. It may have also garnered him some political enemies who seized upon any opportunity to bring him down..

Now don’t get me wrong, there’s no excuse for domestic violence. It should not be tolerated on any level  and if there’s procedure to go through Mirkarimi, no matter how progressive and likeable should go through it and accept his fate.. But given that this procedure being pursued by the Mayor is applicable to all types of ‘unethical behavior’ among public servants, why start and stop with Ross and no one else? Where’s the political muster to after other public servants and their transgressions?

Moving this scenario above and beyond San Francisco, one has to wonder why we don’t see the political brass of a city like Oakland going all out to remove police chiefs and officers when we have cops blatantly lying as they did recently when they shot and killed unarmed Alan Blueford and then claimed he shot them injuring an officer.. Evidence surfaces showing the officer shot himself, yet we see no procedure to remove him or the police chief who publicly covered for him.. Why is that? Is shooting, killing and lying about it not a threat to public safety? Is it not unethical behavior by a public servant?

People have fought long and hard to hold public officials in particular police officers accountable. We need to keep our eyes on this case around Ross Mirkarimi. from the looks of it this seems to be political payback where folks are pretending to be concerned about unethical behavior and domestic violence.. If Mayor Lee’s zeal for protecting the public is disingenuous and we see little or no movements in other areas then he will have done 3x as much damage to the public trust than Ross Mirkarimi ever did.