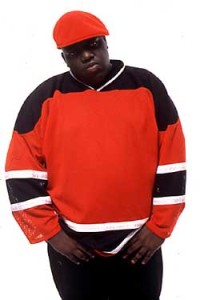 Today, May 21st is the birthday of the late Notorious BIG… Not sure if people take time out to remember, most of us tend to focus on slain rapper’s death day.. and that’s understandable..15 years after his murder we still don’t have a killer in custody.. There’s still a lot of controversy.. For this birthday instead of doing the usual where we look back at the controversies surrounding his death, lets remember what made Biggie so dope…

Has anyone been able to match his charisma and flow since he’s been gone..He’s is still the King of New York in the flesh or in spirit

Wicked flows on the joint party and Bullshit.. I wish I had the video when him and Pac performed this at new Music Seminar..

of course there’s the infamous bottle tossing incident at KMEL Summer Jam.. Biggie and Cap showed up and didn’t do a sound check so they didn’t get a chance to get acclimated to the stage.. hence when Cap spun his records kept skipping.. Biggie tossed a water bottle at him… LOL

One thing you gotta love about Harlem based rapper Immortal Technique is he walks the walk and talks the talk… Most of us admire him for his political wisdom which manifest itself very forcefully in his songs. That’s a good thing.. many of today’s artist shy away from rocking the boat. Tech doesn’t.

More importantly, Tech speaks his truth no matter what. It doesn’t matter if cameras are on him or not. You can catch him participating in marches, rallies and simply building with the community.  A few years ago, I was in Harlem for what would’ve been Malcolm X‘s 80th birthday. Many had come out for march and right there in the middle of the crowd was Immortal Technique. No fan fare. No album to promote. It was just him being a part of the community.. As I said at a day and time when so many are looking for cheap promotion angles, Immortal Technique’s low-key participation was a breath of fresh hair..Below is our 4 part interview.. Given May 19 2006 in Harlem New York..