We talk w/ B-Real of Cypress Hill about the importance of 4:20 and where the best strains of weed are around the world..

Here in Northern Cali when the date 4:20 rolls around (no pun intended), many stick their chest out with pride and they celebrate. For one, Northern Cali is supposed to be home to some of the best strains of weed (cannabis ) on the planet.. I can’t personally attest to this, because I’ve never smoked in my life, but judging from the enthusiasm and constant visits on and off tour by artists from other parts of the country, I have no doubt about the assertions.

second, In recent years 4:20 has taken on heightened importance because California has been a state leading the way to legalizing weed. Here in Oakland, this has been ground zero. It’s home to numerous cannabis clubs which work in partnership with the city. There’s a world-renowned University called Oaksterdam where folks learn how to grow and cultivate…

The conversation in Northern Cali, Oakland in particular has long moved from, how high one can get, to serious discussions about the economy, agriculture and agribusiness, the failed war on drugs, the prison industrial complex, the healthcare system and healthcare practices and how the legalization of weed can impact these aforementioned areas. The conversation has turned away from ‘where to buy’ and ‘where to sell’ to studying farming, irrigation and growing techniques and the pros and cons of creating new strains of the cannabis plant. In short weed was not just some of seedy, back alley ‘gateway’ drug as some would like to suggest, instead its the center piece for a burgeoning industry and very serious culture movement attached to it..

During the recent economic downturn, California was hit hard and everyone from local mayors to our governors began to look at marijuana as a major cash crop that could uplift this economy on a variety of levels. From tourism to consumption, the taxes generated by marijuana have been impressive and that’s only with the engines toward legalization going a quarter of its speed. In Oakland we saw partnerships form with the city and local cannabis clubs. We even saw unions emerge around this as well. For example, people working at Oaksterdam were part of a union…

In recent months Oakland has been growing.. There’s new energy in the city, a renaissance of sorts. Lots of new people, new restaurants, a new spirit that landed the city as one of the top 5 destination places in the world according to the NY Times. Oaksterdam, not just the university but the legions of shops near and around Oakland’s new thriving uptown district was no doubt a key attraction as well. With all this in mind, one can imagine the shock and extreme anger and disappointment when DEA and US Marshalls showed up un announced on April 3 2012 to shut down Oaksterdam.. 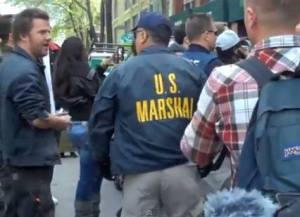 The initial word was the Feds were just targeting just Oaksterdam and the clubs it owned, but no one was buying that.. It sent shock waves throughout the Bay and the state and for the most part seemed like a cheap dog and pony show from the Obama administration to score some political points in other parts of the country where weed is seen as some sort of Holy evil. Many figured Obama could afford to make high-profile moves on California clubs and not lose too much sleep because the state is solidly blue and will remain so come the 2012 election.

His recent trip to Columbia where he re-emphasized that he doesn’t think legalization is the way to go while many heads of state in South America including Mexico think otherwise, hasn’t been encouraging. If the Obama administration continues the crackdowns on medical marijuana spots, many fear its a signal that he’s set to revamped the War on Drugs. Casual users will have to return to the streets and purchase product, there will now be fights and skirmishes to control lucrative drug turf and law enforcement is set to gear up and have payday by establishing task forces, hiring additional manpower and expanding prisons..In short there seems to be some serious economic incentives at play to keep weed ‘illegal’. Lots of big money players in the pipeline.

If weed does somehow finally go legal, there’s concern that this current setback is designed to allow time for those giant corps in agri-business sectors to reposition themselves to be the main beneficiaries. I can see a company like Monsanto suddenly becoming a major player who then turns around stifle growth by patenting weed seeds?

There’s a lot to think about this 4:20. Like I said earlier,  it used to mean big celebration, but nowadays all eyes are peeled looking out for the feds, their next raid and all the political, social and economic agenda they have in store.

Here’s an interview we did with B-Real from Cypress Hill not too long ago where he talks about the importance of 4:20